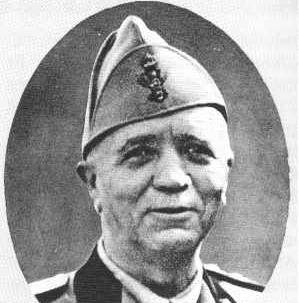 Share
Tweet
Badoglio, having overthrown Mussolini in July 1943, then proceeded to impose military rule over the Italian masses. His role was to hold back the masses with the help of the Allied forces. Scandalously Stalin recognised the Badoglio government. Here we reproduce an article by Ted Grant on this turn of events written in 1944.
[Editor's note: Pietro Badoglio became Italian prime minister on July 25, 1943 after Mussolini was dismissed by the King Victor Emmanuel. He began peace negotiations with the British and Americans but had to flee when German troops invaded Italy. The Americans, fearful of the masses, kept him in power after they occupied the country.]

The recognition of the government of Victor Emmanuel and Marshall Badoglio by Stalin will cause tremendous repercussions among the advanced workers in Italy and throughout the world.

The masses in Italy have shown their hatred of these Allied puppets in the area under the domination of Anglo-American imperialism by stormy demonstrations of protest.

The Left Parties in Italy, including the so-called “Communist” Party, under this irresistible mass pressure have been continually demanding the resignation of Badoglio, the abdication of the King, and the setting up of a Government which has the “support of the people.” And this demand has not risen out of nothing. Badoglio and the King are as much guilty of the crimes of fascism against the Italian people as Mussolini himself. The apparatus of Badoglio’s regime is largely composed of former fascists, who have come over to the Allies, as have Badoglio and the Monarchy, because Allied imperialism appeared to be on the winning side.

The hatred of Badoglio and his regime is so strong that without Anglo-American bayonets, it could not be maintained. The decision of the Allied imperialists to maintain Badoglio in power till after the fall of Rome at least, resulted in a mass movement of protest in Italy, and not least, from the Italian Communist Party. The Daily Worker of Monday, March 13th, 1944 reported:

The British C.P. had piously protested against Churchill’s statement on this question and the Daily Worker reported under the heading: “Cheers For Russia”:

“Although the original purpose of the meeting was to replace the forbidden ten-minute strike of workers called for March 4th, as a protest against Mr. Churchill’s statement m. the House of Commons that the present administration in Italy was the best available until Rome is reached, not one orator mentioned the Prime Minister’s name.

“It was noticeable that cheers for Britain and America, which have hitherto been a feature of all democratic demonstrations, did not figure in today’s proceedings, but every reference to Russia; brought tumultuous applause.

“Paolo Tedeschi, the official Communist speaker, announced that the anti-Fascist parties will, in the coming weeks, organise a referendum.

“He asked the crowd whether it was true that King Victor exercises authority over Italian soldiers. The crowd loudly replied: ‘No.’”

Because of the indignation of even mild left-wing circles in the Labour movement in Britain, the C.P. was compelled to feign opposition to Churchill’s cynical deal with these fascist scum. In its editorial of March 10th, the Daily Worker declared with mock indignation:

“This movement of a nation [strikes in Italy] oversteps and dwarfs alike the ludicrous ‘Mussolini Neo-Fascists’ that the Germans are trying to build up, and the court camarilla around Badoglio and King Victor Emmanuel.

“Let it be a lesson to those among our own leaders who seek to resurrect the strutting figures of the past.

“For the leaders of this tide of revolt are not those who tried to escape the consequences of their crimes by climbing on the victors’ bandwagon [i.e. Badoglio, Emmanuel and Co.], but the tried and true anti-Fascist parties from Catholic to Communist, who fought and opposed the Italian Fascists as the enemies of mankind.”

The rest of the article is in the same strain. Attempting to “reason” with the imperialists to abandon their former-fascist puppets and support the mass movement of the Italian people to rid themselves of these elements.

On the Monday the Stalinist rag was enthusiastically hailing the protest of the Italian masses, on the Tuesday the news came through that far from “our rulers” having learned from the Italian events, the Soviet bureaucracy had apparently gone much further than even the Allied imperialists had dared to go, and had recognised the Badoglio regime outright.

Even under the iron heel of the Nazis the Italian workers in the industrial North are showing their strength and their movement towards Socialism. Already today in Italy in the agricultural South the policy of the Stalinists of supporting the Allies has resulted in a split in the Communist Party. The Stalinist bureaucrats are afraid that to remove Badoglio would be to unleash the forces of the Socialist revolution to a pitch beyond their control; that it would not stop at the treacherous stage of Popular Frontism, but that the workers in the industrial North once “liberated” would move irresistibly in the direction of the Socialist revolution, smashing the Stalinist organisations in the process. This would constitute a mortal danger to the usurpers in the Kremlin and for that reason they prefer, if possible, to bolster up the reactionary and dictatorial regime of Badoglio which has no democratic support among the Italian people.

This is one of the reasons for the policy of Stalinism, in recognising the reactionary Badoglio government. Another reason is the differences among the so-called “United Nations.” Basing himself on an agreement with British and American imperialism against the Socialist Revolution, nevertheless Stalin is afraid of his Allies and attempts to manoeuvre in the game of power politics in the same way as they do. They have been bolstering up Badoglio as a prop against the Italian workers but also to serve their imperialist interests. Not in the least interested in democracy and freedom, they have postponed the question of the regime in “liberated” Italy till the capture of Rome. They have done this with the obvious intention of strengthening the monarchy and its accomplices and agents and facing the masses with a fait accompli. But the Stalinists, to use the old phrase “have been getting in first.”

In a leading article, the Times reveals the annoyance of the British imperialists and demands the coordination of the foreign policy of the Allied powers, but at the same time it cannot repress its malicious glee at the discredit which Stalin’s policy brings on the Soviet Union in Italy. In the Times of March 15th we read:

“Many persons who have hitherto regarded them [Badoglio and the monarchy] as standing for every sort of anti-democratic influence and Soviet Russia as a pattern for all virtues will be compelled to change their view when they see the King and Marshal Badoglio exchanging friendly messages with Marshal Stalin. Thus the scales will be for the moment appreciably tilted in favour of the monarchy and against the republic.”

The Stalinists in Italy have based their whole policy on a fake struggle against Badoglio. Yesterday the British Stalinists made the same empty gestures. Now they write on the recognition of this gangster regime:

“But seems probable that the British Government will follow the Soviet Government in establishing direct diplomatic relations with the Badoglio Government.”

And in its leader column this organ of conscienceless hacks in some embarrassment writes with feigned pride of the exorcising of the “Bolshevik Bogey” by this latest example of Stalinist diplomacy. They write truer than they think. By this new act, the Stalinist bureaucrats show clearly that they stand on the other side of the class barricades. But these traitors are mistaken. No power in the world will be able to dam the tide of mass revolt that is developing in Europe. Today the heroic Italian workers are defying the terror of the Gestapo and the S.S. Tomorrow, no Badoglio, no King will be able to hold them down. The Allies may dream of supporting these reactionaries with the aid of Anglo-American bayonets. The workers and soldiers of Britain and America, will not allow themselves to be used to repress the revolt of’ their class brothers struggling for Socialism. Together with the workers of Europe and Russia they will establish the Socialist United States of Europe.