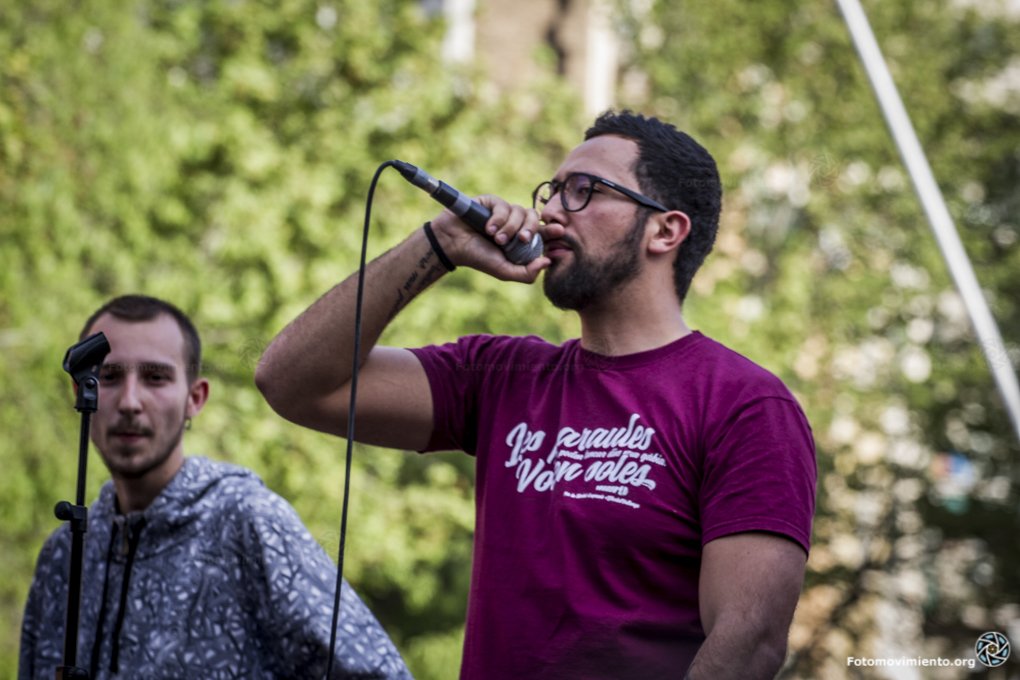 On Thursday 24 May, rap artist Josep Miquel Arenas, better-known as Valtonyc, was supposed to turn himself in to Spanish police to start his three-and-a-half-year jail sentence. He had been condemned for “glorifying terrorism” and “injuries to the Crown” over the lyrics of several of his songs. Rather than spend time in jail for his opinions he decided to flee the country and go into exile. Spain’s list of political exiles just acquired another name.

The sentence against Valtonyc, which was deliberately designed to make him spend time in jail, was meant to be an exemplary sentence – a warning to others – and is part of a general assault on democratic rights and freedom of expression in Spain. Valtonyc was tried and sentenced last year by Spain’s National Court (Audiencia Nacional), a tribunal which is supposed to try crimes against the Crown, organised crime, terrorism, narco-trafficking, etc. and which is the direct continuation of the hated Franco-era Public Order Tribunal. The sentence was then confirmed in February this year by the Supreme Court.

As the date of his jailing approached, a solidarity campaign grew, with concerts and public appearances by Valtonyc at several cities, demonstrations and rallies. Often he was joined by fellow rap artist Pablo Hasel, who has also been condemned to a total of five years in jail in two separate sentences over the contents of his lyrics.

As part of the campaign, under the slogan of #NoCallarem (“we will not shut up”) a group of musicians recorded a video clip and a song in which they repeated portions of Valtonyc’s incriminating lyrics. The song, “Los Borbones Son Unos Ladrones” (“Bourbons are thieves”) became an immediate hit and has had over 2.8 million views on YouTube.

If the Spanish justice system was consistent, all those involved would also have to be tried on the same charges. Valtonyc himself refused to be silenced and published a new album called “Repeat Offender”:

10 days ago Valtonyc, who lives in the island of Mallorca, publicised the fact that the police had given instructions to all airlines to report any plane ticket bought in his name. That led to a campaign in which supporters bought plane tickets to different destinations in order to throw the police off.

Yesterday, as the deadline for him to enter jail neared, Valtonyc published a tweet warning he would not make the police’s job easy and that “to disobey is legitimate and a duty when faced with this fascist state”.

It was later revealed that he had already fled the country between 10 and 15 days ago. His whereabouts are still not known, but there is speculation that he might be in Belgium or Switzerland, where there are already a number of Catalan political exiles linked to the struggle for a Catalan Republic.

There are two features common to many of the current trials and sentences against freedom of expression in Spain. One is the criminal charge of “glorification” of, or “apology” for terrorism, which the PP toughened in 2015 to include messages spread over internet. This is a catch-all category that is scandalously used to curtail freedom of expression and is aimed exclusively against the left. To give one example, a group of Madrid youth, organised in a small vegan anarchist collective called Straight Edge (SXE), were charged with terrorism. The evidence against them included tweets they had published, including one where they said “Death to Capitalism” and another that said “Goku lives, the struggle continues” – a clearly ironic reference to a Japanese cartoon character from Dragon Ball Z!

A 23-year-old YouTube journalist, Alex Garcia, has been summoned to the National Court on charges of glorifying terrorism, over material he published on his channel: mainly interviews and reports of social struggles, as well as interviews with former members of terrorist organisations. He could face two years in jail.

As a matter of fact, in Spain there are no active terrorist organisations. ETA declared a complete ceasefire back in 2011 and has now disbanded itself. Still, people are being charged and sentenced for “glorifying” terrorist organisations, which no longer exist! Between 2011, when ETA declared its ceasefire, and 2018 there have been 121 sentences for glorification of terrorism, four times the number of the previous seven years when ETA was still active.

The other common denominator in many of these cases is the accusation of “injuries against the Crown”. This is particularly scandalous because the monarchy is one of the most discredited institutions of the whole of the 1978 regime. Opposition to the monarchy is most acute in Catalonia where over 60 percent of the people have absolutely no confidence in the institution (0 on a 0-to-10 scale). Overall confidence is rated at 1.82 percent. In the Spanish state as a whole, 37 percent say the abolition of the monarchy would be an improvement, while only 23 percent say it would be negative.

Clearly, the ruling class is worried about the growing opposition to the monarchy – one of the central institutions of the 1978 regime – and is using the law to attempt to frighten people into silence. It is actually having the opposite effect. 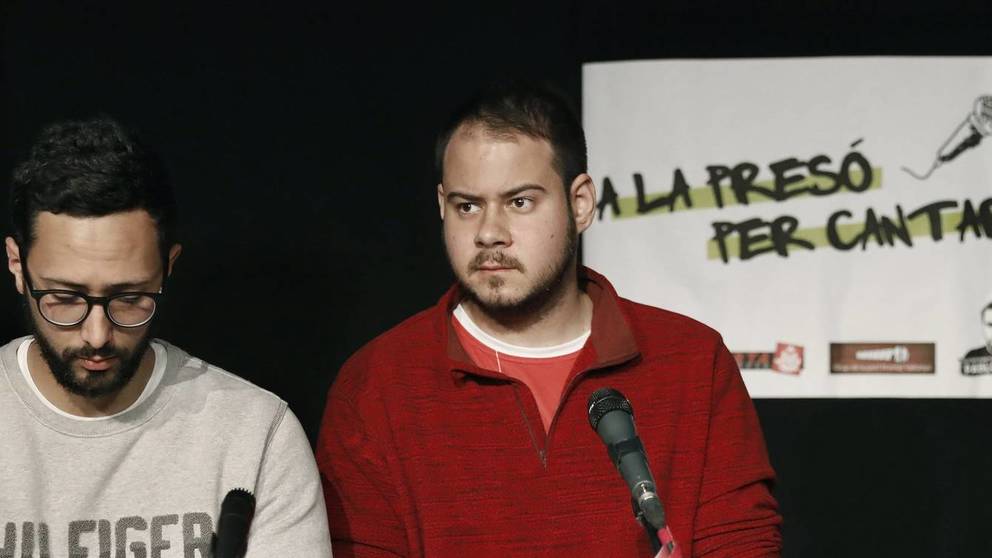 Demonstrations took place in several cities across Spain yesterday against the jailing of Valtonyc and there will be more today. The Spanish Justice Minister has announced that there will be a euro-arrest warrant against him. This might prove to be yet another embarrassment for the reactionary Spanish justice system, which has already been rebuffed by decisions in Germany and Belgium over the extradition requests for Catalan politicians in exile.

It is worth noting the dereliction of duty on the part of the main left-wing organisations in Spain over this assault on democratic freedoms and freedom of expression. United Left has openly condemned the jailing of Valtonyc and today has announced that they will offer lodging for him wherever he might be in Europe. So far, Podemos has remained silent over him going into exile. Both organisations should have organised a common front in defence of democratic rights to coordinate nationwide demonstrations and rallies, used their positions in the institutions to highlight this case, organise a national march on Madrid etc. It should be possible to force the repeal of the hated “gag law” as well as to strike off the penal code “glorification of terrorism” and “injuries to the Crown” crimes. However, in most of these cases, the leaders of Podemos and IU, to different degrees, have remained silent or refused to use their whole muscle to organise a serious campaign.

Mass mobilisations should physically prevent anyone from entering into jail for the crime expressing their opinions. The lack of a coordinated response only has the effect of encouraging the regime and frightening everyone into silence. The cases are piling up. Activists are being tried and sentenced over all sorts of things: participation in peaceful roadblocks, peaceful resistance against evictions, political opinions expressed in social media…

It has now been announced that 14 people are going to be tried over clashes with the police on the night of 15 May 2011, when the indignados movement first took to the streets. The prosecutor is asking for a six-year jail sentence. An activist with the Catalan Committees for the Defence of the Republic, Adri, from Esplugues de Llobregat, has had to go underground to avoid being arrested on charges of terrorism for his participation in a peaceful road blockade. A journalist with the left-wing site La Haine has been charged with assaulting police officers and could be sentenced to six years in jail over events that took place in 2014 during the ‘Surround Congress’ protests. He was covering the protests as a journalist and was assaulted by the police, who then attempted to frame him for assault, despite clear video evidence to the contrary. Dozens of Catalan activists are facing trial over acts of civil disobedience in defence of the right of self-determination. In Alsasua (Navarre), eight youth are being tried for terrorism over a bar brawl with off duty Civil Guards and face 375 years in jail altogether. 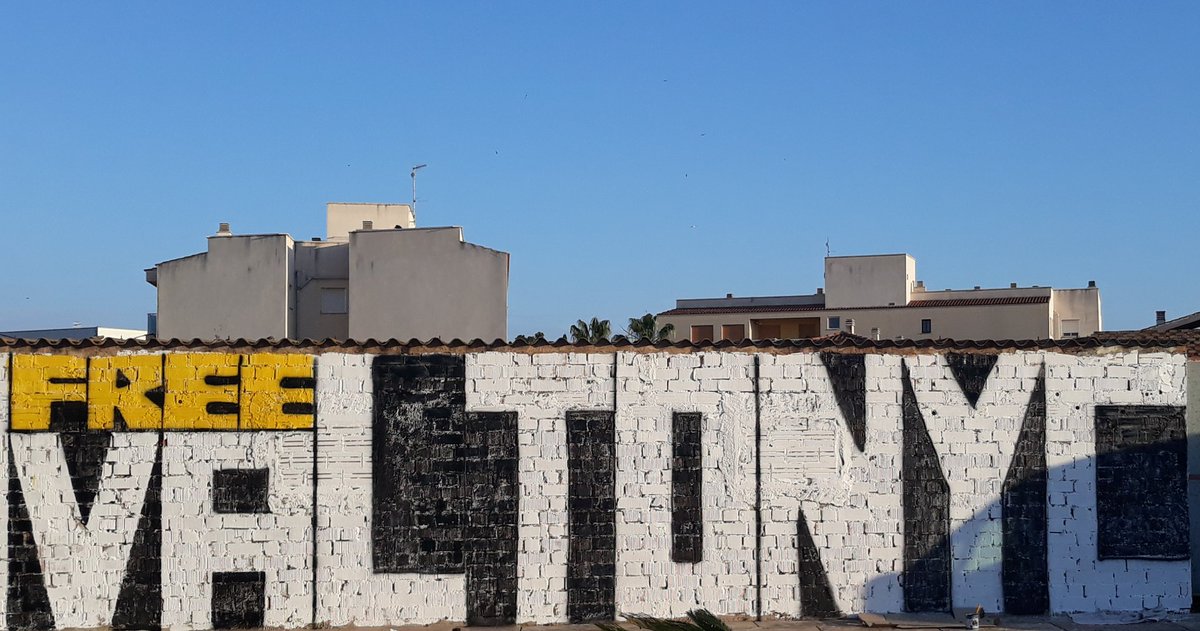 The defence of democratic rights and freedom of expression should be a central question for left-wing and trade union organisations across the Spanish state / Image: FOTOMOVIMIENTO

Perhaps the most farcical example is that of left-wing actor Willy Toledo, who is being tried for offending religious feelings in a case brought up by the fundamentalist Association of Catholic Lawyers after the actor posted a message on social media where he said “I shit on God and on the dogma of the sanctity and virginity of the Virgin Mary”. Yesterday he refused to turn up at the trial alleging that neither God nor the Virgin Mary had turned up as witnesses after he requested they testify as to whether they felt offended by his comments. Apart from the farcical nature of this case, this is another serious case of curtailment of freedom of expression.

The defence of democratic rights and freedom of expression is therefore not a side issue but should be a central question for left-wing and trade union organisations across the Spanish state. Only mass mobilisation can provide an effective response.