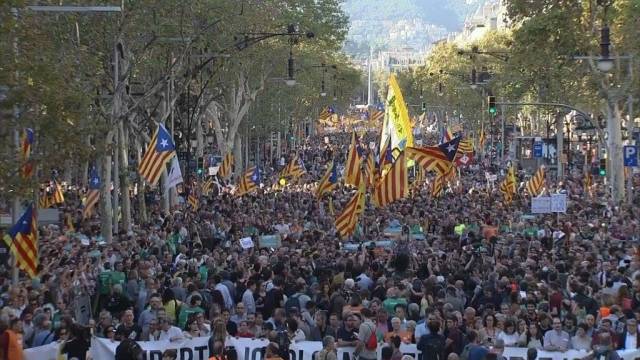 450,000 marched on Saturday, October 21, in Barcelona (according to local police) with tens of thousands gathering in other towns and cities across Catalonia, to demand freedom for the two Jordis (held without bail on sedition charges) and to reject the Article 155 coup announced by Spanish president Rajoy in the morning.

At the end of the council of ministers, Rajoy announced the details of the measures his government wants to implement and will be voted by Senate next week (possibly Thursday or Friday).

These measures amount to a coup against democracy in Catalonia. Rajoy wants to dissolve the Catalan Parliament (within six months or earlier, as soon as the situation "becomes normalised again"), will sack the Catalan president, vice-president and all the Catalan ministers, will take over the running of Catalan government directly from Madrid, will curtail the powers of the Catalan parliament while waiting for elections (it will not have the power to elect a president, to pass a vote of no confidence in the authorities, and any law it wants to pass will have to be approved first by the Spanish Senate which will have absolute veto powers). As well as these general measures, the Spanish government will have specific powers to control Catalan police, finances, telecommunications and the Catalan state-owned media (in the interest of "neutrality").

This is an absolute scandal which will give a party which has only 8.5 percent of the vote in Catalonia, absolute control over its government.

Prominent PP politicians have said that when elections take place in Catalonia, parties that propose independence will not be allowed to stand on that program. If you can't win an election, remove your opponents!

The measures proposed had been agreed beforehand with PSOE and Cs (Citizens) and of course have the backing of the King as well. This is not a measure taken by the PP government but a defensive reaction by the whole of the 1978 regime.

The state prosecutor has also warned the Catalan president that if he were to declare independence in response to these measures he would be indicted with rebellion, a charge that carries a 30-year prison sentence, and could be facing pre-trial detention. The same fate can affect Catalan government and parliament members if they are party to such a declaration.

These measures have been rightly been denounced by Catalan government parties PDECAT and ERC, as well as the CUP, CSQP and the Comuns, as a coup against democracy. A number of prominent PSC (Catalan PSOE) mayors have signed a letter opposing the measures, and Sta Coloma PSC mayor has resigned from PSOE Federal Committee as a result.

The brutal character of the measures proposed has also put the alliance of Barcelona mayor Ada Colau with the PSC in the council under strain. The Basque bourgeois nationalist party PNV, which backs the PP government, has also come out against the proposed use of Article 155.

The demonstration today was massive. Trains going into Barcelona were packed and the whole route of the demonstration was packed with people before it even started. The mood was angry and defiant. A significant number of political leaders who are against independence and have argued against a unilateral declaration were present.

At 7.30pm, after the demonstration, the presidency of the Catalan Parliament issued a press release through its speaker Carme Forcadell denouncing the measures and saying that Catalan parliament will not budge.

Later on, at 9pm Catalan president made a televised statement in which he denounced the measures and announced that he will convene the Catalan parliament to discuss the matter. Significantly he has not declared independence nor said he will ask parliament to do so. He also has not made any mention of what measures his government will take to resist them.

There is a lot of pressure from the ranks of the movement for a declaration of independence and to organise mass civil disobedience to resist these measures. There is talk of a general strike. The Committees for the Defence of the Referendum (CDRs) mobilised from the different towns and neighbourhoods for the demonstration and in discussions in the last few days have demanded the proclamation of the Republic.

We are entering into a crucial week in this struggle. Despite its indecisiveness, the Catalan government has very little room for manoeuvre. In its last letter to Rajoy on Thursday Puigdemont announced that he would be forced to declare independence if Article 155 was used. The question is: if a Catalan Republic is declared, how can it be defended? It is clear to everyone that the EU, in which PDECAT and ERC leaders had such faith, will not intervene on the side of democratic rights nor upset the status quo.

The only way a Republic can be achieved is by revolutionary means. If the Catalan government and Parliament majority are serious about it they should declare one and then organise the resistance, barricade themselves in their offices and call on the people to organise and defend the buildings, the democratic institutions through mass demonstrations, civil disobedience and a revolutionary general strike to paralyse the economy.

The CUP and the CDRs have the duty to advance that perspective and start building for it, regardless of what the Catalan government does or does not do. Bourgeois and petty bourgeois politicians have shown their indecisiveness already on many occasions. People like Mas, Santi Vila and others are clearly sabotaging the movement at each stage. We can't wait to see what they want to do.

The leaders of Unidos Podemos also have a grave responsibility. Their position in the last few weeks has been scandalous, calling for dialogue and blaming both sides for being "irresponsible". Instead they should be explaining the fundamentally undemocratic character of the 1978 regime and organising the struggle to defend the democratic rights of the Catalan people, linking that to the struggle against capitalist austerity, for jobs, houses and bread and to put an end to the ‘78 regime.

A revolutionary opportunity has opened in Catalonia, the question is, will there be a leadership that can raise to the challenge posed?

Marxists stand unconditionally for the right of self-determination of the Catalan people and argue for a Catalan Socialist Republic as a way to spark an all-Iberian revolutionary movement.