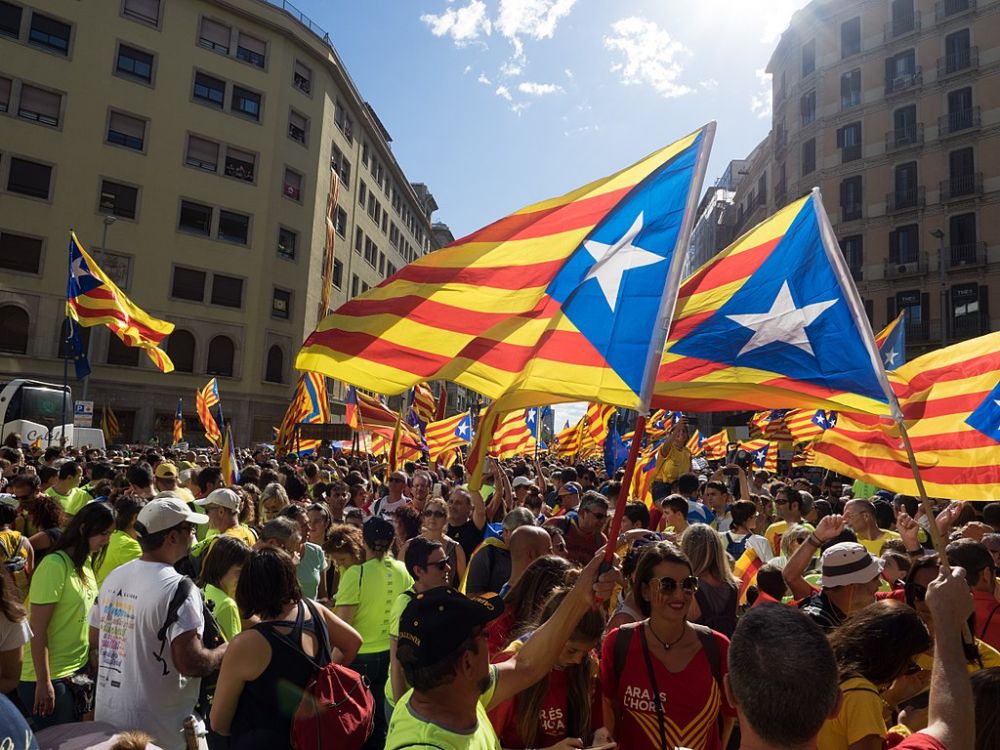 Nine Catalan political prisoners, who have been held in remand for almost two years, have been given lengthy jail sentences of between 9 and 13 years by the Spanish Supreme Court for sedition and misuse of public funds. And what was their “crime?” The organisation of the Catalan independence referendum on 1 October 2017. This is a scandalous, undemocratic ruling that reveals the rottenness of the Spanish 1978 regime. The International Marxist Tendency rejects these outrageous sentences and calls on the labour, socialist and democratic forces of the world to mobilise against them with all their might.

The Catalan political prisoners have been cleared of rebellion, but found guilty of the crime of sedition, which is taken directly from the Franco-era penal code. It involves “rising up publicly and tumultuously to prevent, through force or beyond legal means, the application of the law”. There was in Catalonia no “tumultuous rising”, nor “use of force”. What did occur was a mass movement that took to the streets in an organised manner to exercise the democratic right of self-determination. The trial itself was full of irregularities and arbitrariness on the part of the judges, who were belligerent against the defence and systematically ruled evidence out of order.

One of the pillars of the Spanish 1978 regime, born out of a rotten compromise between the workers’ leaders and the dictatorship after the death of Franco, is the unity of Spain – guaranteed by force – and the denial of the right of the nations to freely choose whether they want to remain in Spain. Defiance of this principle is considered defiance against the whole system. This is why the Spanish state used brutal repression to suppress the referendum, then went on to arrest the leaders of the Catalan government and close down the Catalan parliament. Now it has handed out exemplary sentences, which are meant as a warning against anyone trying to repeat the same challenge.

Mass mobilisations are already underway in Catalonia. Students have walked out of schools and universities, and thousands are gathering in towns and cities to protest this scandalous ruling. They are demanding the immediate release of all political prisoners and defending the right of self-determination. This is the way forward. As was proven in October 2017, the Spanish regime can only be combatted through mass action.

The International Marxist Tendency stands with the Catalan masses in their struggle for self-determination and in defence of democratic rights. We already took a clear position demanding the release of the Catalan political prisoners. The leaders of the Catalan government, now sentenced to jail terms, at the crucial moment in 2017 vacillated and did not take the struggle to the end. That has not saved them, but lessons must be drawn from this experience. The struggle for a Catalan Republic, which would represent a massive blow to the Spanish 1978 regime, can only be successful through revolutionary means. It must also be combined with the struggle for labour and social rights (housing, education, health care, rights at work) so that it can have a broader appeal, in Catalonia and throughout the Spanish state.

The International Marxist Tendency expresses its solidarity with those condemned and with the CDR members arrested in September of this year, who are being held in remand. We demand their immediate release without charges. They are all political prisoners, detained for exercising basic democratic rights. We call on the labour movement; and democratic and socialist organisations around the world to mobilise against this assault on democratic rights.

Solidarity with the mobilisation of the Catalan masses!

For a Catalan Socialist Republic as a spark of the Iberian Revolution!