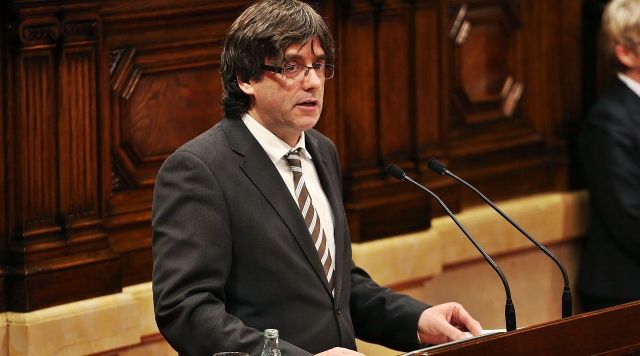 It seemed as if everything had been decided in advance. Catalan president, Carles Puigdemont, was going to go to the Catalan Parliament and announce the formation of an independent republic, as he was bound to do by the results of the 1 Oct referendum.

That would be followed by the suspension of Catalan autonomy on the part of the Spanish state, which had declared the referendum illegal, and perhaps even the arrest of the Catalan government members for rebellion. In the end the clash was delayed, but probably not averted. 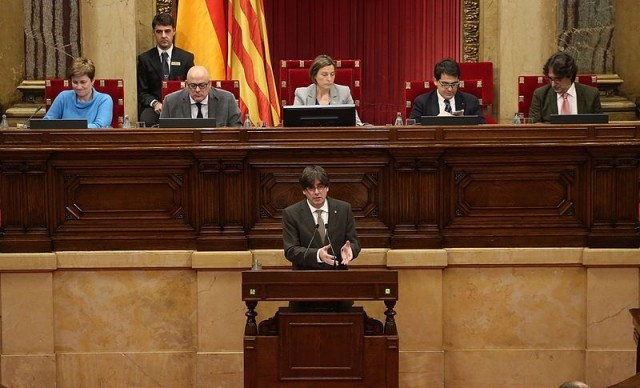 In the days leading up to the Tuesday, 10 October session of the Catalan parliament, president Puigdemont had come under intense pressure from bourgeois public opinion. The Catalan bosses’ organisations (united in their opposition to independence) had told them in no uncertain terms, in public and behind closed doors, that he should not take any further steps towards independence.

This almost unanimous position of the Catalan capitalist class was articulated clearly by Duran i Lleida, the leader of Unió, a political party that had been a close ally of CDC (the predecessor of Puigdemont’s PDECAT), an alliance that broke when CDC became a pro-independence party. In a TV interview on the day, Lleida said that “Capital wants stability and it knows that it [i.e. independence] creates insecurity” and added that the Spanish government would have “no other option but to use Article 155”, which allows for the suspension of Catalan self-rule.

To the pressure of the Catalan capitalists (who in the last few days have moved the legal residence of the largest Catalan companies to the rest of Spain) we must add the pressure of the European Union capitalist bosses, who also dislike “instability”. In a public statement, the president of the European Council, Donald Tusk, warned the Catalan president “to respect constitutional order and not to announce a measure [Unilateral Declaration of Independence] which would make dialogue impossible”. There must have also been a number of private calls from European heavyweights.The day’s sequence of events had been agreed beforehand between the Catalan ruling coalition JxSi (United for Yes, comprising bourgeois nationalist PDCAT and the social-democratic ERC) and the anti-capitalist pro-independence CUP which provides the necessary MPs for a parliamentary majority. President Puigdemont was going to read a full statement declaring a Catalan Republic and then announce that its implementation was going to be suspended to allow time for negotiation and talks.

At the last minute, the session was delayed by an hour and the president changed the script. Instead of reading the declaration of the Catalan Republic he made a statement on behalf of his government. The key point was when he explained that “with the results of the 1 Oct referendum Catalonia has won the right to be an independent state, and it has won the right to be listened and respected” (my emphasis). Then he added: “having reached this historic moment … I assume, in presenting to you the results of the referendum … the mandate that Catalonia shall become an independent state in the form of the republic.”

Note that the use of words was particularly non-committal and vague. At that point, the crowd following the session from outside Parc de la Ciutadella erupted in cheers. That was not to last, for just two sentences later he added: “and with the same solemnity the government and myself, propose that Parliament suspends the effects of the declaration of independence so that in the next few weeks we embark in a dialogue, without which it is not possible to reach an agreed solution”. The faces of the crowd changed, from elation to disbelief. The CUP parliamentarians refused to stand up and didn’t clap at the end of the speech and their spokesperson Anna Gabriel made a sharp speech complaining that this was not what they had come to the session for.

After the session was over, the MP of the pro-independence majority, in a separate room, went on to put the signatures to the actual Declaration of Independence, a document which, so far, has no legal effect and will not be published as an official document in the Catalan government bulletin.

The reaction of the CUP and many amongst the ranks of the people who have mobilised, in the hundreds of thousands, in the last few weeks and braved brutal police repression to make sure the referendum went ahead, was one of disappointment, anger, but also, in great measure, recognition that achieving a Catalan Republic would not be as easy as they might have expected. The CUP then issued a warning to the Catalan government that they would give this attempt at talks only a limited timeframe and that in the meantime they would not take their seats in parliament (which JxSi needs for a parliamentary majority).

The way in which Puigdemont’s statement was made and its content reveal clearly the weakness of the strategy of the Catalan bourgeois and petty-bourgeois politicians in the Catalan government. First of all the masses were kept outside of the Parc de la Ciutadella, where the Catalan Parliament building is. They wanted the session to be free from the direct pressure of the masses which have mobilised in the last few weeks.

Secondly, the statement is an attempt to get European powers involved in the conflict, so that they can somehow mediate between the Catalan and Spanish governments. This is foolish in the extreme, as the European capitalist powers do not care one iota about the right of self-determination of small nations (though they are of course happy to use it as a fig-leaf when it suits their purposes). If there was a major breakdown of “law and order” threatening serious economic and financial consequences, they might consider intervening, but any intervention would not have the interests of the Catalan people at heart. 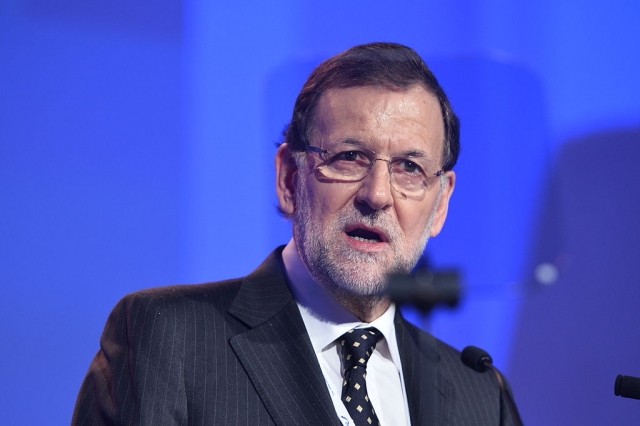 The comparison that has been floated in Catalan nationalist circles with the way Slovenia became independent (first a declaration of independence which was suspended in the hope for an agreed referendum, and six months later a final declaration) is completely misguided. At that time there was already a foreign imperialist power (Germany), which was plotting for the breakup of Yugoslavia for its own reactionary reasons. Furthermore, support for independence in Slovenia was overwhelming, when in Catalonia it is not.

The other side of the coin to the manoeuvres and half-hearted steps taken by the Catalan government is the reaction of the Spanish state. This morning Rajoy made a statement coming out of a council of ministers in which he explained that he had sent a written requirement to the Catalan government to explain if it had or not declared independence.

This, far from being a gesture of goodwill or a respite in the tensions, is a legal prerequisite for the application of Article 155 of the Constitution which allows the central government to suspend, partially or completely, autonomic powers. This is the way the Spanish regime will act. It cannot allow the slightest shadow to be cast over the rule of law and Spanish legality and it will respond with all means at its disposal, legal as well as repressive.

The PSOE leaders have already said that they will fully support the implementation of Article 155, adding that the negotiation Puigdemont proposes is “illegal”. In order to cover themselves they have also announced an agreement with premier Rajoy to convene a “constitutional reform” commission which will work over a period of six months. This is not even a proper carrot, to balance the Article 155 stick.

Everyone understands that the Spanish 1978 regime will never allow for the right of self-determination to be included in the Spanish constitution (short of a revolutionary situation in which they risk losing everything). Any constitutional reform involving the two main parties of the regime (PP and PSOE) will only produce small, secondary amendments.

In the afternoon session of the Spanish Congress, Mariano Rajoy clarified the limits for any ‘reform’: “the sovereignty of Spain as a whole cannot be negotiated, nor the indivisibility of the Spanish nation” and he added: “they are trying to confuse us over an alleged right to decide, which is a cunning way to invoke a right to self-determination which is not recognised in any constitution”.

Therefore it is likely that in the next few days the Spanish state will again take measures against the democratic rights of the Catalan people and resort to repression. The conflict is not over by any means. A showdown has just been averted by a few hours, perhaps days or at most a few weeks. The Spanish state is sure to make good use of the 12 Oct Spanish national day, to mobilise the forces of Spanish nationalism in the streets, including another demonstration that has already been called in Barcelona.

The events of the last 24 hours clearly demonstrate a few central points that we have stressed from the beginning: the setting up of a Catalan republic (even the exercise of the right of self-determination) in the context of the Spanish regime is a revolutionary task and therefore cannot be led by the Catalan bourgeois and petty-bourgeois politicians.

A revolutionary task means relying on the power of the organised and mobilised masses, which has been on display in the events of 20 September (when 50,000 surrounded the building of the Catalan Finance Ministry in an attempt to prevent the actions of the Civil Guard); 1 October, when hundreds of thousands occupied schools, opened and protected polling stations; and 3 October when again hundreds-of-thousands brought Catalonia to a standstill and took the streets in dozens of towns and cities. 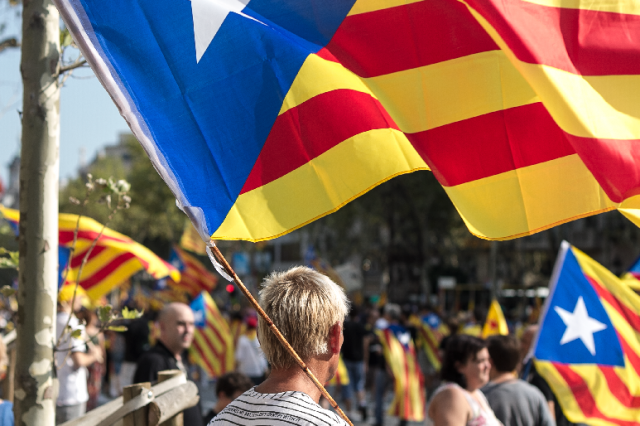 The cause of a Catalan Republic needs to widen its social base of support by appealing to those sections of the Catalan working class that are justifiably wary of the Catalan bourgeois leaders of the government. To a certain extent that already happened as a result of police repression on 1 Oct, but it needs to go further.

While the figures of the referendum have to be taken with caution (police repression closed hundreds of polling stations where 700,000 people were registered, and seized dozens of ballot boxes which could never be counted), it is clear that turnout was significantly lower in the working-class areas surrounding Barcelona and Tarragona, where the Spanish-speaking Catalan workers are concentrated. Thus, while overall turnout was 43 percent, in the industrial working-class Baix Llobregat county it was only 32 percent; and in the Barcelonès country (including Barcelona, Badalona, Santa Coloma de Gramenet, Sant Adrià del Besos and Hospitalet) it was 36 percent.

These layers can only be won by a clear identification of the idea of a Catalan Republic, national and democratic rights, linked to the idea of reversing austerity and cuts, and the struggle for jobs, homes, health care, education and pensions for all.

This is why Catalan Marxists argue for a Socialist Republic as the only way forward. Such a program would also be the best way to appeal to the working people of the rest of the Spanish state in a common struggle against the 1978 regime.