South Africa
Share
Tweet
87 people were arrested on Saturday April 6 at a protest outside the house of Johannesburg's mayor, Amos Masondo, in South Africa. The protest was against the practices of the privatised South African electricity company ESKOM, which has been disconnecting users who cannot afford to pay their bills. It was organised by the Soweto Electricity Crisis Committee (SECC) which has trained activists in how to reconnect people's power supplies. 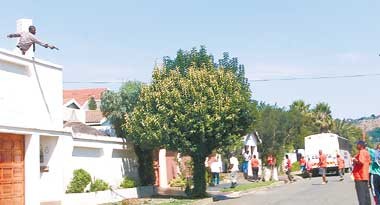 Eighty-seven people were arrested on Saturday April 6 at a protest outside the house of Johannesburg's mayor, Amos Masondo, in South Africa. The protest had been organised by the Soweto Electricity Crisis Committee to protest against the practices of the South African electricity company ESKOM, which has been disconnecting users who cannot pay their bills from the electricity grid in Soweto, the country's largest township.

The arrests took place after one of mayor Masondo's security guards fired at the crowd with live ammunition, injuring two of the protestors, a youth from Thembalihle and a pensioner from Tshiawelo. Then the crowd responded by throwing stones and smashing Masondo's water meter.

One of those injured by the shots was 67-year old pensioner Samson Khumalo, who supports his wife and five grandchildren on his R570 monthly pension, who had his water and lights cut off a month ago after he fell R500 into arrears. Speaking to a Sunday Times reporter he said: "This government promised us a new life, a good life, but there isn't any…at home there is only bread to eat and sometimes not even butter because there is no money." (Sunday Times, April 7, 2002)

A spokesperson for the mayor said: "We have repeatedly informed these people that the Mayor has nothing to do with outstanding electricity bills and they must deal directly with Eskom."

But SECC chairperson Trevor Ngwame, who was an ANC councillor in Soweto, replied by saying that they wanted to make the ANC accountable to its promise of delivering free water and electricity to the people, a promise which was prominent during the ANC December 2000 local council election campaign.

After spending two nights in jail, the arrested protestors were formally charged on Monday. Some of them, mainly pensioners and minors, were released on bail, but at least 40 of them were refused bail and transferred to Diepkloof Prison where they will remain until April 16 when their case will be heard. Amongst those who are still in jail are SECC chair Ngwane and South African Municipal Workers' Union provincial organiser Rob Rees. Their bail application was turned down on the basis that police needed time to verify protestors' addresses! In the meantime, the security guard who fired at them is still free.

In a press statement demanding the immediate release of the protestors, SAMWU General Secretary Roger Ronnie declared: "We must not lose sight of the fact that evictions, service cut-offs and high service charges within an environment of spiralling unemployment have become a feature of the everyday lives of the protestors and many other communities across the country. It is regrettable that the demonstration took an ugly turn but the union calls on the government to address the legitimate demands for basic services that poor communities are making."

This is just the latest in a series of protests in townships around the country over the last few years against water and electricity cut-offs and evictions. These are being applied by ANC and Democratic Alliance councils alike against residents who fall into arrears in their water, electricity and rent bills. In many cases this is due to the replacement of flat-rate payments for services by metered bills. 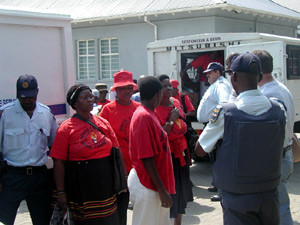 In a place like Soweto, Eskom is trying to get residents to pay for arrears, some of which have accumulated since the boycott campaigns which were part of the struggle against apartheid in the 1980s. According to a study by Wits University, 90 percent of all Soweto households with electricity are behind in their payments. Of the 1.5 million people who live in Soweto, about 20,000 customers get their electricity cut off every month and sixty-one percent have had their service shut off within a 12-month period.

Against this background the Soweto Electricity Crisis Committee was created about a year and a half ago. One of its most popular campaigns has been Operation Khanyisa ("to light" in Zulu), in which the SECC has trained activists in how to reconnect a power supply. Similar organisations have been created in other townships around the country to reconnect residents to their water and electricity supplies and move evicted families back to their homes.

One of the main reasons for Eskom's insistence on getting the money from arrears is the forthcoming privatisation of the publicly-owned company. No private investor will want to buy Eskom, if this is a business which cannot get its customers to pay! Eskom blames the problems on a "culture of non-payment", but in reality most of these households simply cannot afford to pay.

The struggle in Soweto, like those in other communities up and down the country, are the people's response to the economic policies of the ANC government. Since the adoption of the misnamed Growth, Employment and Redistribution (GEAR) programme, the government has been implementing the same policies which the IMF and World Bank have been demanding from countries all over the world: privatisation, opening up of the markets, "liberalisation", etc. The consequences have been disastrous. Far from creating jobs, hundreds of thousands of workers have been laid off, growth has been sluggish and very little redistribution has taken place at all.

SECC activist Bongani Lubisi explains the feeling of millions when he says: "We thought that when we got rid of the old government that our black government would take care of us. But instead the capitalists are getting richer while the working people lose their jobs and can't even meet their basic needs." (Washington Post, November 6, 2001) 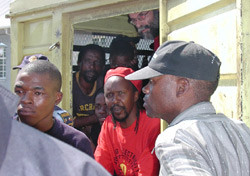 Despite limited improvements in a number of fields, the capitalist policies of the ANC government have created widespread disillusionment amongst the millions who participated in the liberation struggle and then voted the ANC into power. Ironically, in some cases it has been Communist Party leaders from their positions as ANC ministers who have been implementing these policies.

Today is the tenth anniversary of the assassination of Chris Hani in 1992, who was then the general secretary of the South African Communist Party. In words that should make today's "Communist" ministers think hard he said:

These words are now more relevant than ever in South Africa. The ANC leaders in government have abandoned any pretence of fighting for socialism, but the masses who put them in power are still fighting for the basic demands, continuing with the legacy of Chris Hani.

(Photos by Florencia Belvedere of the Anti-Privatisation Forum.)

We urge all In Defence of Marxism readers to send strongly-worded but polite messages demanding the immediate release of the arrested protesters to:

Solidarity messages can be sent through: