Pakistan
Share
Tweet
South Waziristan is a Tribal area in Pakistan, on the notorious Durand Line drawn by the British in 1893. The presence of a primitive tribal system in this area and the absence of any social infrastructure clearly reveal the impotence of the Pakistani bourgeoisie. What is new is the fact that a Marxist is standing for parliament in the area, offering a socialist alternative to the barbarism that threatens the whole region.

Current events in South Waziristan clearly highlight the internal weakness and contradictions of the Pakistani State. The Pakistani Army, battling with Taliban fighters, gets into the newspaper headlines almost daily. In the last few weeks the battles have intensified as the Taliban have captured important strategic forts of the Pakistani Army in Sararogha and Sipla Toi.

South Waziristan is one of the Tribal Agencies included within FATA (Federally Administered Tribal Areas) by the Pakistani State. Lying along the notorious Durand Line drawn by the British in 1893, this area has a long history of battles and wars. The presence of a primitive tribal system in this area and the absence of any social infrastructure clearly reveal the impotence of the Pakistani bourgeoisie.

The Mehsud and Wazir tribes dominating this area have rich cultures and traditions. Both tribes have their characteristic dance styles, which mark their festive occasions. However, the contradictions of combined and uneven development that have brought war and destruction on this area have turned the place into a living hell.

The "dollar Jihad" promoted by US imperialism against the Soviet Union in the 1980's promoted the phenomenon of fundamentalism which has now become a monster. The poor and underprivileged people of the area are caught between the fierce battle going on between the Pakistani State and the fundamentalist Taliban forces. Both are battling to get hold of the black economy of billions of dollars which is mainly based on opium production.

On the one hand the clerics are imposing their will upon the people in the area, while on the other hand the Pakistani Army threatens the common people with home searches and curfews. People whose lives have become more miserable due to this fighting want an end to it all. But neither Pakistani capitalism nor the sermons of the clerics can offer them an alternative that can lift them out of their miserable lives.

In this situation comrades in the area are spreading the message of socialism, which is the only hope for the wretched people. Comrade 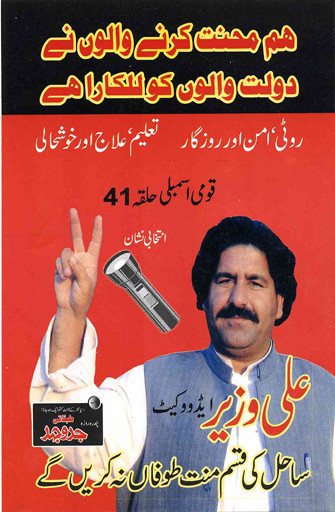 Ali Wazir is contesting the elections in NA-41 constituency, which includes Wana, the capital of South Waziristan along with the districts of Tiaraza, Birmal and Trikhel. This constituency has 64,170 male and 29,907 female voters who will cast their vote at 78 polling stations, if the elections are held on 18th February.

Comrade Ali Wazir is leading a revolutionary election campaign on the slogans of socialism. The slogans on his poster are, "We the toilers, have waged a war against the wealthy" and "Bread, Peace, Employment - Education, Health, Prosperity". In his meetings he has explained that only alternative to this war and destruction is a socialist society. He has taken a position both against the Pakistani state and the mullahs and has stated that only class war and not religious and national war can bring prosperity to the area.

In the 2002 elections Maulana Abdul Malik won this seat as an independent candidate taking 8005 votes. Maulana Malik has the support of Maulana Fazl-ur Rehman, one of the staunch supporters of the Taliban. Fazl-ur-Rehman who was the leader of the opposition in the last National Assembly, himself patronizes many Madrassahs that produce the Taliban.

This time round the people have become tired of listening to anti-state sermons by these mullahs, as their previous experience has shown them that these same mullahs are actually the puppets of the Pakistani Intelligence agencies. Also, this time they have an alternative which stands both against the barbaric mullahs and the bloodthirsty Pakistani State and imperialism. Such a stance appeals to their hearts.

The already deplorable living conditions have worsened over the past few months and currently the basic necessities such as flour have been in short supply and people are migrating from the area. According to Urdu language BBC website, a person from the Tiaraza area in South Waziristan, Noor Ali, told one of its correspondents that, "Food supplies have finished in the area. People cannot do anything but leave. The people cannot tolerate the problems of Waziristan, but the government has closed the roads for the poor people." Another person, Mqarib who is a driver, told the BBC correspondent in Taank near Manzai that, "The army has seized more than a dozen trucks of flour bags near Manzai and have thrown the drivers in jail."

Now the local Taliban are attempting to reach out to the masses for social support and want to gain sympathy by telling stories about their helplessness and innocence. But the real problem of the people is hunger, poverty, health and other basic necessities which neither the Taliban nor the Pakistani State can offer them. The economic crisis within the Pakistani State does not allow for any kind of reforms in the area. This is why the people are seriously searching for a revolutionary alternative.

At this crucial juncture the election campaign of Comrade Ali Wazir with a clear socialist alternative is gaining wide support. If the elections are held in this area then the comrade has a big chance of winning and defeating the candidates supported by the mullahs and nationalists. There is no alternative on a nationalist basis. Only by severing the Durand Line through the carrying out of a socialist revolution and the building of a socialist federation of the sub-continent, including Afghanistan, can the problems be solved.

The present tense situation in the area after the recent attacks by the Taliban at Sararogha and Sipla Toi forts have increased security risks for the comrades taking part in the election campaign. The chances of elections actually being held in this area are diminishing every day. It is evident that one wing of the ISI (Pakistani intelligence services) wants to spread this insurgency throughout the whole country in order to keep the masses out of the political process. The bomb blasts on Mall Road in Lahore and in Peshawar links in the same chain.

The situation is also worsening in the Dera Ismail Khan and Taank, cities adjacent to South Waziristan. The people migrating from South Waziristan are settling in these areas. However, the Pakistani Army has started search operations in these cities and the surrounding areas, harassing the common man and woman.

The candidate of the Pakistan Peoples Party in NA-25 Taank is Dawar Khan Kundi who is contesting against Atta-ur-Rehman, the brother of Fazl-ur Rehman. The slogans painted by the campaign team of Dawar Khan on the walls of Taank city are "Socialism is our economy" and "We want the end of Feudalism and Capitalism". Dawar Kundi along with Faisal Kundi, who is contesting in NA-24 DI Khan city against Fazl-ur Rehman, are tipped to win their seats with big margins.

Due to fear of the victory of these candidates, the ISI is attempting to sabotage the whole election process. Comrades are playing a key role in the campaign of Dawar Kundi in NA-25. Dawar Kundi's belief in socialist ideas is growing as every day passes and he is showing a keen interest in joining the IMT. If the elections are held this time and Trotskyists win in Wana, Karachi and Kasur then these elections could become the parliamentary elections of Pakistan that mark the beginning of a process that will eventually lead to a socialist victory of the working class.