Students at Witswatersrand University, also known as Wits University in Johannesburg, South Africa, have taken strike action in response to the announcement that tuition fees will be increased by 10.5%, accommodation costs by 9%, and upfront registration fees by 6%. 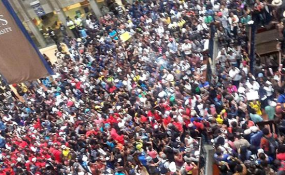 Students are rejecting the attempts by university management to justify these increases by saying that the cost of stationary imported from abroad has increased and that they are increasing the wages of the lecturers. While management attempts to divide and conquer, the students have been keen since the start of the semester to be on the side of the workers whose jobs the university plan to outsource. In fact many workers, including outsourced cleaners, marched alongside the students on Tuesday.

A video on the Facebook page of the group shows a medicine student’s plea to raise funds to be able to start her course. In the video she explains how she had excellent marks and was admitted to the University but now she is struggling to fund her studies. In fact one of the slogans used by the students is “Being intelligent is not enough if you are poor”.

We are on our way to Empire Road where the struggle continues!

On Wednesday the university was brought to a standstill as the protesters organised a sit-in in front of the gates of the university’s Braamfontein campus. Beginning with around 100 students the action gained momentum as it spread around the campus and students decided to disrupt lectures with chants. The protest was the biggest in the recent history of the institution, involving thousands of mainly black students.

Ex-president of the student representative council Mcebo Freedom Dlamini told protesting students that the action was to be continued until management dropped the proposal of a fees increase. He also said that as well as fighting the fees increase, students are also fighting against a university management that is anti-black and the system as a whole. Students have been pictured waving communist flags and the protest clearly has an anti-capitalist mood.

The university has responded by saying that protest must be restricted to a particular area of the campus so as not to disrupt lectures and threatening disciplinary action against anyone who infringes this rule. It seems that, as far as the university is concerned, it is fine for management to threaten the living standards of students and limit access to higher education, but they will not allow students to disrupt a lecture in defence of the right to study.

The Marxist Student Federation sends a message of solidarity to the students and comrades in South Africa. Your fight is our fight. We fight together against any limitations on access to university for the poorest in society. We stand in solidarity with your resistance against management attacks. We stand with you as you join ranks with those workers whose jobs are at risk. We salute you in the fight against racism, against apartheid. And comrades, most importantly, we stand with you in the struggle against capitalism.

Our battle for a free, accessible and quality education is a battle for a better future. Governments around the world are cutting funding and allowing universities to become more like businesses and less like places for learning and development. In the UK they are suggesting lifting the cap of £9000 a year and privatising the students’ debt.

Beatrice Papapietro, on behalf of the Marxist Student Federation