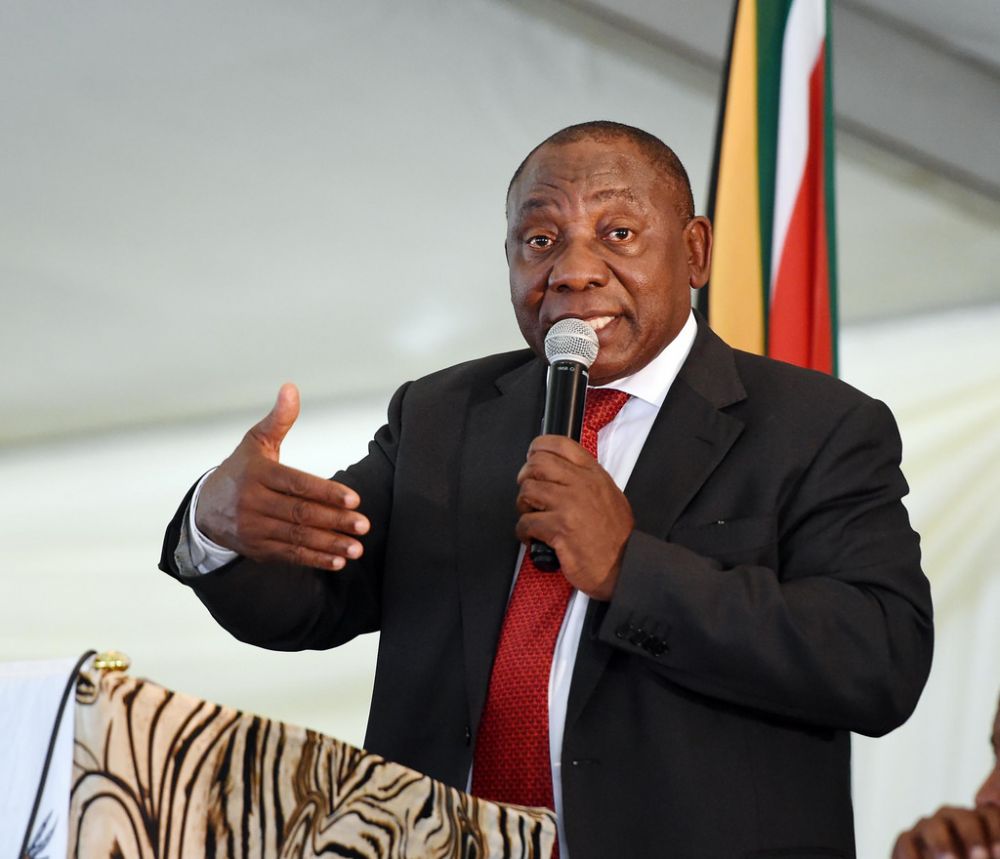 On 21 February the middle-class illusions in Ramaphosa received a shattering blow when the outgoing finance minister delivered a brutal austerity budget. This was just one day after the new president had told everyone during his State of the Nation Address that a “new dawn” has broken.

The move by Ramaphosa’s government to try and plug the 50bn rand black hole in the budget by raising the rate of Value Added Tax is a direct attack on the working class. The impact of the economic crisis is being put squarely on the shoulders of the workers, the poorest and the most vulnerable sections of society. Naturally, this was welcomed by the three big ratings agencies. This should tell us in whose interests the government is acting.

Big business was delighted at the proposal. The Chamber of Mines called the budget “tough but necessary” – that is, tough for the working class and necessary from the point of view of big business! Moneyweb called it “an investor-friendly budget.” After a rough few weeks on the global markets, South African investors could now pop the champagne. Moneyweb was celebrating the fact that the rich were spared and that the burden of the crisis will be paid by the poor:

“While global markets were choppy last week, Wednesday’s budget is positive for local markets even though consumers will cough up more at the tills and petrol pumps. From the point of view of individual investors, the budget is positive too. For one thing, there are no additional taxes on investment returns (in the form of capital gains tax or dividend withholding tax).”

That is correct. Wealthy people will not be paying additional tax on capital gains and dividends. The rate of tax on trusts and on companies will also remain unchanged. Transfer duties on the sale of properties will also remain the same. But that is not all – the rich can now also move an additional 500 million rand abroad because of looser exchange controls. This will make it easier for the fat cats to take their loot out of the country – and not only through illicit financial flows, which by itself is a massive drain on the economy. All of this is happening while the poor are expected to cough up higher rates of taxes through a rise in VAT.

An additional 36bn rand in revenue will be raised, mostly by hiking the VAT rate from 14 percent to 15 percent. The VAT increase will raise an additional 22bn rand. There will also be other indirect taxes such as a fuel levy and excise duties which will bring in an additional 2bn rand. But the working class is not only expected to pay on the revenue side. In order to cut the deficit from 4.3 percent of GDP to 3.5 percent, there will also be massive cuts of 85bn rand over the next three years. This means that there will be more than 30bn rand less for things such as schools, houses, railways and municipal infrastructure – all things that affect the working class the most. 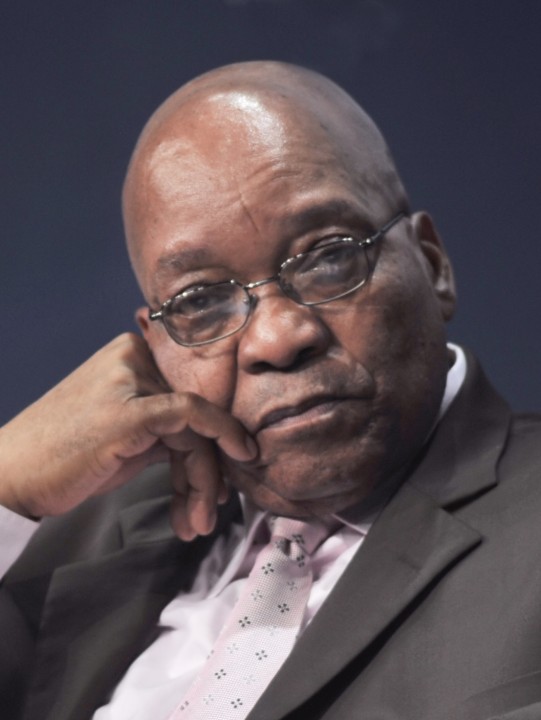 The government is funding the ‘free’ tertiary education for first-year students, announced by Jacob Zuma in December last year, by putting the burden on the working class / Image World Economic Forum on Africa

In order to fund ‘free’ tertiary education for first-year students, which was announced by former president Jacob Zuma in December last year, the government was scrambling to find an additional 57bn rand. The introduction of fee-free higher education is of course a big victory for the mass student movement of the last two years. But in the end this was done in the most callous way possible. The whole purpose of this has been defeated by putting the burden on the working class.

The problem is that the massive cuts and the hike in VAT will not even begin to solve the economic crisis. Quite the contrary! By putting the burden on the working class in the form of cuts and higher taxes, all the government is doing cutting demand in the economy. Cutting government spending and raising taxes on the workers will slow down the meagre 1.5 percent economic growth expected this year even more. This will prompt the government to increase borrowing. And in order to qualify for further borrowing and please the ratings agencies, the government will have to make further cuts in the future, which in turn will cut demand even further. This is a race to the bottom and will lead to a disaster for the economy.

The imposition – and now, the raising of the rate of Value Added Tax – is a very emotive issue in the history of the class struggle. It was first imposed in South Africa in 1991. It caused a massive uproar from the labour movement and nearly led to the overthrow of the apartheid government. This was during a revolutionary upheaval. The economy was in tatters and the apartheid regime was fighting for survival. Washington was pushing the regime to enter into formal negotiations with the liberation movements. The fear in the West was that the situation could lead to a full-scale overthrow of the system. As part of the package of reforms, the IMF insisted on scrapping the General Sales Tax and replacing it with VAT. VAT is a regressive tax that disproportionately hurts the poor, especially the 55 percent of South Africans who live below the poverty line.

This increased hostility from the working class was one of the reasons why the regime fast-tracked plans to proceed with the Codesa negotiations. The ANC government knows how emotive this issue is. But the fact that they have announced their plans and risk the backlash is an indication of the extent of the economic crisis. After all, ‘someone has to pay’. And since we are living under capitalism, the burden is expected to be carried by the working class.

But the government is walking on a very thin tightrope. All the trade union federations have unanimously rejected this proposal. This is a sign of the seething anger bubbling beneath the surface. Even the right wing of the labour movement were forced to come out against the rate hike. The country’s biggest federation, COSATU stated:

“Government’s response to its budget problems is to take money from workers through VAT and below inflation income tax bracket hikes. This will hurt workers and their families by taking money from their pockets and making basic food and other living expenses more expensive”.

“This budget constitutes a frontal attack on the gains of the workers. This is demonstrated by the grandstanding orthodox, conservative austerity measures presented in form of budget cuts, regressive tax regime, lowering of head counts in the public service, and an affront on workers’ wages and conditions of employment.”

This has caused new divisions inside the ANC itself. The caucus is divided on the issue. ANC members of parliament’s standing committee on finance came out openly against the VAT increase, stating how the VAT hike would affect poor people. The chairman of the committee Yunus Carrim said:

“We as the ANC are also very concerned as our allies – Cosatu, the SACP and the labour movement and civil society – about VA…We’re worried about whether national treasury has done an impact study to show its effect on the poor and lower income earners.”

Carrim is missing the point. For the National Treasury it is not a matter of “impact on the poor”, but about who pays for the crisis: the workers or the capitalists? And since the burden is being put on the poor, then naturally this will have a dire impact on the working class and the poor. But the main concern is not about the impact this decision will have on the poor. For the likes of Carrim the concern is about the ‘consequences’...for the government! This is why he is now crying crocodile tears. This issue will put further pressure on the government from both the working class and the capitalist class and will deepen the class struggle. 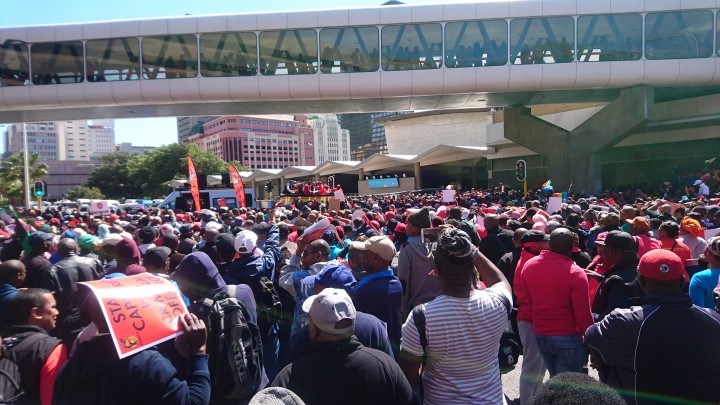 COSATU: VAT hike "will hurt workers and their families by taking money from their pockets" / Image: Discott

The more left-wing South African Federation of Trade Unions were more scathing, correctly calling it an “onslaught on workers.” Already it is planning mass action to protest against the VAT hike and against the budget as a whole. Its Central Committee is expected to endorse taking strike action at a meeting later this month. This is the correct road to take. But a strike by itself will not be enough to force the government to change its policy. This is not a matter of a ‘bad’ policies by the government. It flows as a natural consequence of the crisis of the capitalist system. From the point of view of the ruling class this is the correct road to take. The only way forward for the working class is to make the capitalists pay for the crisis of their system. This means the expropriation of their land, their banks and monopoly industries.