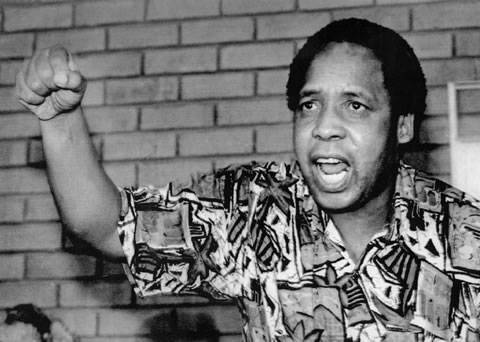 On Saturday, April 9, the Pretoria Central branch of the South African Young Communist League held a political seminar and a memorial session on the anniversary of the death of the South African Communist leader Chris Hani, where two speakers addressed the gathering, Leon Wiitboi, the branch secretary and Ali Nooshini of the International Marxist Tendency.

The first speaker to address the meeting, comrade Leon Wiitboi, opened his speech by explaining how the assassination of Chris Hani by the apartheid regime in 1993, was still felt by many people in South Africa. He also underlined that it was the mass uprising following this assassination that put the final nail in the coffin of the hated regime. He said that he has great respect for the South African masses that struggled and continue to struggle for Chris’s slogan of “one man, one vote”.

However, at the same time Leon explained that today we can see that this wasn’t the end of the road for the liberation movement. He made a harsh criticism of those of Chris Hani’s contemporaries who have now found comfort in the corridors of the state and in the boardrooms of big companies, while postponing the question of socialism to a distant future. He said that today it is clear that the true material liberation of the masses can only be achieved through a socialist revolution. Leon concluded by saying that the ideas of Marxism that Chris Hani adhered to, in spite of what the bourgeois and the renegades of the workers’ movement say, are more relevant today than ever before.

After Leon, Ali Nooshini, a comrade from the International Marxist Tendency currently in South Africa, also spoke. Comrade Ali started off by reminding the comrades how the bourgeoisie had proclaimed the death of socialism and class struggle more than 20 years ago. But today it is clear for all that the contrary is the fact. The revolutions in the Arab world have crushed all myths about the age of revolution being over and highlighted the fault lines between the capitalists and the workers on a global level. He said that revolutions are not made by agitators or powerful men; revolutions are made by the masses and prepared by the capitalist system that is not capable of satisfying their most basic needs.

The comrade, who recently wrote a widely circulated article about the situation in South Africa (Reformism or Revolution – On the YCL congress and the future of communism in South Africa), underlined the fact that the situation is not different here in South Africa. Seventeen years after the fall of the Apartheid regime, which was brought down on the basis of a broad mass movement, the working masses of South Africa still endure great suffering. While many concessions have been won in the last 17 years, these same concessions are being undermined every day as unemployment and poverty rise. Today social inequality in South Africa is higher than during the apartheid era.

Ali explained that the masses of South Africa are feeling the contradiction between the constraints of capitalism and their needs, and they are pushing to move further. He said that the enormous growth of the Communist Party and its Young Communist League, as well as the impressive strike of the public sector workers last August and September, showed that the South African workers are indeed very radical and willing to struggle. He said that the problem of the revolution lies not within the masses, but with the leadership of the ANC and the SACP who refuse to put themselves at the head of the struggles of the workers and connect them with the struggle for a socialist society. Ali said that the main task today lies in reinforcing these organizations with the ideas of Marxism in order to lead the class struggle in South Africa to its logical conclusion – socialist revolution. He ended his speech by proclaiming his full confidence in the ability of the South African masses to take society – and thus their destiny – into their own hands and overcome all obstacles.

After the speakers, there was a vibrant debate between the comrades present. Despite the short notice at which the meeting had been organised and the fact there was a big political event with ANC Youth League leader Julius Malema on the same day, more than 20 people turned up to the Chris Hani meeting. The enthusiasm generated by the debate was also shown by the fact that 1200 Rands (200 USD) worth of Marxist books was subsequently sold from the book stall that the comrades had set up.

In the coming weeks comrade Ali Nooshini will speak at a series of meetings in South Africa. On Tuesday, April 12, the comrade is talking at the Pretoria YCL Tshwane University of Technology branch. Also on Thursday, April 14, he will be speaking at the SACP West Rand Dr. Yusuf Dadoo Workers’ Institute. Besides these meetings, comrades from the YCL are preparing several other public meetings as well as a series of discussions on the fundamentals of Marxism.