South Africa
Share
Tweet
We have received these observations about the election day in South Africa and comments about the general political situation in the country.

South Africans braved a bitterly cold morning across most of the country to go and vote in their droves today. I arrived at the polling station at just past seven sporting a red T-shirt with a bright yellow hammer and sickle on the front. The queue of voters was already 500m long.  The only other observable political T-shirts were those of the ANC and its tri-partite alliance partners the South African Communist Party (SACP) and the Congress of South African Trade Unions (COSATU). Many black voters wore their political colours openly and with pride. Most white voters wore no political colours preferring to be ensconced in thick winter wear. 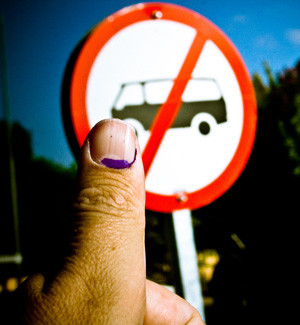 Indelible ink on the left thumb indicates that a person has voted. Photo by Axel Bührmann on flickr.

Our ward is in the middle-class area of Auckland Park in close proximity to both the South African Broadcasting Corporation's headquarters and the University of Johannesburg.  The black voters voting here are upbeat university students, cocky in their support for the ruling ANC and its outspoken youth league leader, Julius Malema, and domestic workers, shop workers and garden workers. Many white voters brought their children along, clearly the fact that their domestic workers ‘nannies' were also voting meant that the madams could not leave their offspring in the care of the domestic.

Behind me two young cadres of the ANC discussed the secret ballot. "I am proud of the party I am voting for! My vote does not have to be a secret!" one remarked enthusiastically. Further back a white voter commented on the number of vehicles from provinces other than Gauteng parked in the street, inferring that there must be some ‘irregularities' happening. The white voters are heeding the hysterical call of Helen Zille to "STOP ZUMA!" by voting against the ANC.

Despite the white minority population being better off materially than they have ever been under Apartheid, large numbers of whites vocally berate the ANC at every opportunity. The white minority capitalist class were the main beneficiaries of the neo-liberal Growth with Equity and Redistribution (GEAR) policy, the self imposed structural adjustment programme that made Trevor Manuel the Minister of Finance and Thabo Mbeki the blue eyed boys of the Washington Institutions  such as the IMF and the World Bank. They made shareholding alliances with key political figures in the ANC in the minerals plunder that occurred in provinces such Limpopo, Mpumalanga and North West Provinces. The new found wealth of the nouveau-riche is garishly displayed in the imitation Tuscan villas situated in gated golf estates emphasizing the new notion of "housing apartheid" deepening the still existing spatial arrangements of old style racial segregation. These "salt and pepper"[1] gated communities are guarded by private security companies founded by the demobilized officers of the old Apartheid army. Prominent luxury vehicles such as Hummers, Bentleys, Porches pass through the security controlled gates of the estates.

The predominantly white capitalist class warned on Monday 20 April that a two-thirds majority for the ANC spelled doom for the economy and will be felt at the Johannesburg Stock Exchange. This display of ingratitude comes despite 14 years of government servitude and compliance to the demands of capital at the cost of the working class and the poor, which is exactly what led to the demise of the Mbeki clique at the ANC's Pholokwane conference in 2008. 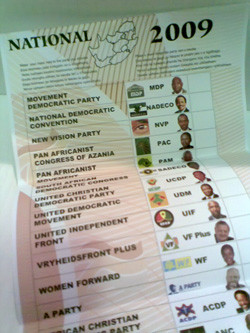 Part of the national ballot paper for 2009 elections. Photo by warrenski on flickr.

COSATU has warned that its support for the ANC in this election and for Jacob Zuma at Pholokwane comes at a price. Cde Solly Phetoe, the leader of COSATU in the North West Province, complained that the provincial executive of the ANC in the province did not include enough members of COSATU or the SACP on candidate lists. Dissatisfaction was also expressed in other province by the left wing of the Tri-Partite Alliance. In the North West Moss Phakwe, a prominent trade unionist and town councilor was shot dead in his drive way on 15 March. He was shot twice as he sat in the front seat of his car and no valuables were taken. Phakwe was clearly assassinated. Sources in COSATU allege that he was shot for investigating corruption involving the mayor of Rustenburg, Mr Wolmarans, and the District Mayor of Mafikeng, Mr Themba Gwabeni.  Cde Phakwe along with Solly Pethoe were also prominent in leading the uprising against the pro Mbeki leadership of the ANC in the province before the Pholokwane Conference of the ANC which ousted the Mbeki clique in 2008. Cde Phakwe was also a prominent communist. Interestingly this blatant attack against a prominent working class leader in the country has been totally ignored by the bourgeois media.

There were also several reports today of delivery protests organized in poor working class areas to coincide with the elections. In Alexandra Township 200 protestors protested about the slow delivery of housing. Posters emblazoned with "One Vote = One House" was prominent. Delivery protests also occurred in the Eastern Cape. Hardly a week passes without several delivery protests around the country, including a debilitating truck drivers' strike which took place over Easter. The National Union of Mineworkers (NUM) has also given notice of an above inflation pay increase demand of 15%. A surface worker currently earns around SAR3000 (US$300) per month before deductions while and underground worker grosses SAR5000 (US$500) per month. These starvation wages are in stark contrast to the billions raked in by mining corporations during the recently ended commodities boom, and the millions made by Corporate CEOs.

Clearly the working class and the poor are voting for the ANC in large numbers with the understanding that the leadership of the liberation movement have been put on notice: swing to the left...or else!