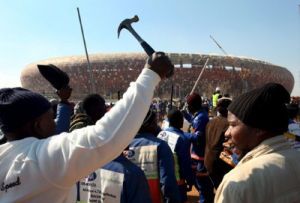 South African miners and building workers have come out on strike, affecting the building projects for the 2010 World Cup. Here we publish a solidarity meassage from Mexico.

We have learned that on July 8th, 70,000 construction workers and miners in South Africa went on strike, and this directly affects the plans for the 2010 World Cup taking place next year in that country. In response the organizing committee of the event, said in a statement that "the workers are the ones keeping alive the project of the 2010 World Cup.” We reply that not only do they keep this alive, but the whole of society.

The bad working conditions in this country are reflected by the fact that these workers are paid an hourly wage of 4.5 Rand (US$0.55). When compared to the billions generated by the World Cup, this is something worse than a mockery, so the workers have demanded an overall wage increase of 13%. Yesterday afternoon hundreds of workers had gathered wearing their work overalls and armed with sticks. This is the beginning of a struggle that – fortunately - can be very costly for the bourgeoisie.

This strike is not the first, nor is it the only one; national health service doctors and transport workers are also in struggle. Lesiba Seshoka, spokesman for the NUM, said: "Not only will the World Cup stadiums be affected. We are talking about power plants, hospitals, roads, and other sectors. This will last until they (the employers) understand the situation and offer a 13 percent annual wage increase.”

South Africa is building six new soccer stadiums for 2010, and also restructuring another four, and press reports indicate that the strike could affect the ongoing project of building of a high-speed train rail link between the airport and Johannesburg. We cannot allow the bourgeoisie and big business sports to become even richer because of the miserable wages paid to those who maintain the whole of society. We send a greeting from Mexico to the striking class brethren, members of the best team in the world, the working class.

Solidarity with the struggling workers in South Africa!
Support for the strike of the National Union of Mineworkers!
Workers of all countries, unite!