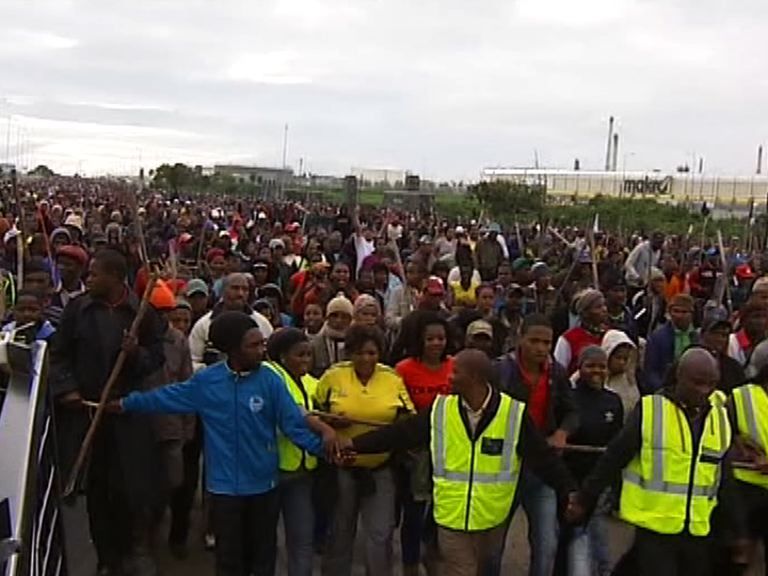 The number of civic protests in South Africa has skyrocketed to new record highs. New figures which were released by the Civic Protest Barometer of the University of the Western Cape on 19 February 2015 show that the number of protests by communities, so-called ‘’service delivery’’ protests, more than doubled between 2007 and 2014. The researchers also show that 2014 was the year with the highest number of these protests on record.

The report states that between 2012 and 2014, Gauteng had more protests than any other province. Between 1 April and 10 May 2013 Gauteng was hit with an astonishing 560 protests according to the provincial police.  Since 2007 Gauteng's share of protests had been rising more rapidly than any other province. Cape Town was the most protest-prone municipality, with 84 protests last year, followed by Johannesburg, eThekwini, Tshwane and Ekurhuleni. These five municipalities accounted for half of all protests recorded.

Commenting on the figures, the report states: "Issues relating to municipal services and the administration of municipalities were cited more often as the cause of protests than all other grievances put together.  In addition the barometer tests one hypothesis about the causes of protests, namely that it signals a 'rebellion of the poor', against the empirical data."

These protests are now truly part of daily life in the country. This is especially true in the decade after 2004 which has been characterized by escalation of popular protests and increased militancy reminiscent of the anti-apartheid struggle days. Intelligence service company Municipal IQ recently showed that South Africa had almost one protest every second day in 2014 with Gauteng being the most protest-ridden province. Furthermore, by January 2013 the data shows that service delivery protests in 2012 accounted for 30 percent of protests recorded since 2004. Between 2008 and 2013 approximately 3000 protests took place.

Most of the recorded protests took place in the informal settlements or poor urban areas in the country’s biggest metro areas such as Cape Town, Johannesburg and Ekurhuleni.  Poor or non-existent delivery of services, such as housing, electricity, water and sanitation, are at the top of grievances of most communities. Another reason for the explosion of public protest is rooted in very high levels of youth unemployment. Out of these protests, a large number of grassroots organisations have emerged like Operation Khanyisa, Abahlali baseMjondolo, No Land! No House! No Vote!, and the Ses’kona Peoples Rights Movement.

2015 has already started with a series of high profile protests like in Malamulele and Mohlakeng. What this shows is that the working class and poor communities are looking to radical solutions to the unbearable conditions under capitalism. But these protests also reveal the lack of a revolutionary leadership with a programme, as we have seen in Malamulele where the grievances were channeled into impotent demands for a separate municipality. But the struggle against poverty, unemployment and the lack of housing will not be solved by attempts to isolate the community, but rather to combine the demands of all the protesting communities under a revolutionary programme which is linked to the revolutionary socialist transformation of our society.