The entire land redistribution programme in South Africa is being bedevilled by a mixture of feudalist and capitalist land rights, with the liberal constitution of the country protecting private property as a 'right', while the majority black African population not having private property in land, still being subject of a pre-colonial property dispensation that came to be entrenched under Apartheid. 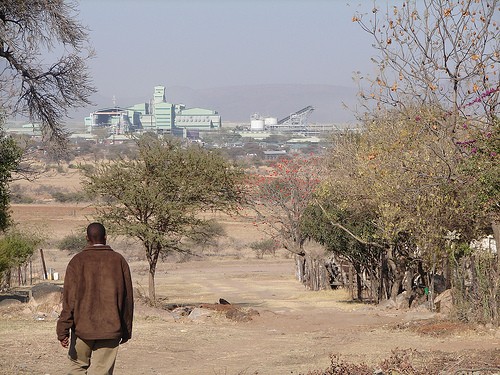 The Apartheid capitalist system in South Africa was largely based on the mining sector, with South Africa being the biggest producer for most of the 20th Century of gold, diamonds, platinum and many platinum related minerals such as chrome and vanadium. Apartheid capitalism exploited the cheap labour provided by the black African majority, which lost control over their main means of production in land in a series of savage wars of dispossession in the 19th Century. By 1913 the notorious Land Act was passed which restricted the black African majority (80% of the population) to 13% of the land in so called "Native Reserves." Blacks were also prevented from becoming urbanized by a variety of laws that restricted their movement and limited residence to these overcrowded reserves. Initially only black men were allowed into the white cities where the gold and diamond mines were located to provide cheap migrant labour. These mineworkers were paid "single men's wages" as the mine bosses argued that their families could eke out a living for themselves back in the reserves. Thus migrant workers became semi-urbanised proletarians, they could almost be described as a peasantariat [1], who once they were consumed by capitalism were discarded back into remote marginal rural areas often sick with TB, silicosis, sexually transmitted diseases and or crippled by mining injuries.

The Native African National Congress was formed at more or less the same time that the Land Act was passed and was immediately tasked as a liberation movement to contest the land question in South Africa. A central mobilizing factor in the entire liberation struggle was the land question. Thus the Freedom Charter passed in 1956 demands that "the land shall belong to all who live on it." The 1969 Morogoro Conference of the ANC resolved that "In our country - more than in any other part of the oppressed world - it is inconceivable for liberation to have meaning without a return of the wealth of the land to the people as a whole." The Morogoro Conference also warned that liberation would be meaningless if "an elitist group among the oppressed people to gain ascendancy so that they can replace the oppressor in the exploitation of the masses." (ANC 'Strategy and Tactics', Morogoro).

Yet in the early 1990s in twist of historical fate it was discovered that the marginal land to which proletarian families had been banished to eke out a living contained the richest platinum mineral reserves on the planet. Now history began to repeat itself in that these people whose ancestors were herded off their land by colonial power at the behest of mining capital is once more being brutalized, but this time by the very government that they had elected again to force them off the land at the command of mining capital.

So on 23 May 2009 peasant landowners from Roodekraal, near Sun City, marched to a prospecting site of Impala Platinum mine, to give the corporation notice to leave their land with immediate effect. The mining company failed to consult the community, a requirement of the law, whose land the mining company invaded and they do not want any mining to take place. Despite this, a joint venture of Impala Platinum and the Royal Bafokeng has started prospecting on their land. The communities have engaged in rolling mass actions from 23 May onwards. The Minerals and Petroleum Development Act (MPRDA) requires that mining corporations 'consult' communities before commencing with prospecting. "Consult" is a very weak term; it is what doctors and lawyers do when dealing with their clients. Consultation does not require consent or approval as an outcome. Thus the MPRDA is extremely weak and biased towards the capitalist mining corporations.

These communities bought the two pieces of land in Brits in the North West province of South Africa 1907, and finishing paying for these portions of lands in 1912. In 1923-1924 they were forcefully removed by the colonial government of the Union of South Africa and resettled at Roodekraal Spruit.

When the African National Congress came to power in 1994 a critical part of its mandate derived from its promise of land redistribution and land restitution. With People were encouraged to reclaim land from which they were forcefully removed after the passing of the notorious 1913 Land Act. The affected communities lodged their first land restitution claim on 11 June 1997, was followed by the second claim on 28 September 1998. They lodged both individual claims and communal claims with title deeds and shares including minerals rights. Their claim was gazetted in 1999.

With regard to Roodekraal Spruit where their forefathers were resettled, the government only allocated them 7469 Morgen 360 square without including the Ysterfontein land even though they were also forced out of Ysterfontein. Eventually an agreement was reached concerning the restitution of the communities land. 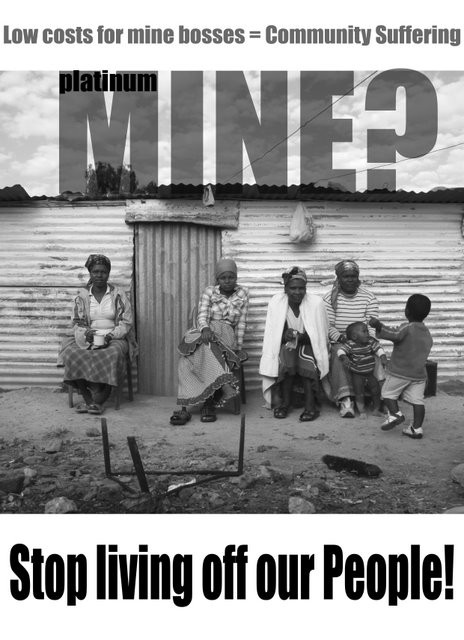 The agreement was that for every ¼ hectare taken they would get 1 hectare back at the new place where they were relocated, but they only received 1.5 Morgen for every 1 Morgen. They were also promised three boreholes, but these never materialised. In all the negotiations there were no Bafokeng tribal authorities or members, yet the community was surprised to find that the Bafokeng now have portion of their land. The affected community is opposed to the Royal Bafokeng for also dispossessing them of a portion of their land. The entire land restitution/redistribution programme in South Africa is being bedevilled by a mixture of feudalist and capitalist land rights, with the liberal constitution of the country protecting private property as a 'right', while the majority black African population not having private property in land, still being subject of a pre-colonial property dispensation that came to be entrenched under Apartheid. In effect this largely leaves the racial Apartheid spatial divisions in place. Although the constitution allows for government to nationalise land, including white owned farm land where it is in the national interest, the government has opted for the reformist "willing buyer, willing seller option" which has also proved a failure. The government must use its constitutional power to nationalise all large land holdings and place them under the control of peasant communities to be run in the interest of the people who work the land and the country as a whole.

Community representatives say that "They now find themselves having to go to the land claims court and even to embark on rolling mass action to protect and defend our land" (Source Jubilee South Africa, National Office, Press Alert, 23 May 2009).

The newly ANC government is faced with a test of its credibility. It promised to be different from the Mbeki regime which preceded it, and which was openly anti-working class and pro-capitalist. The people in rural communities supported the call by COSATU, the SACP and the left within the ANC to back them in ejecting Thabo Mbeki at Polokwane in 2007, the people, the families of the proletariat in rural areas once more heeded the call of COSATU, the SACP and the left within the ANC to put the new ANC leadership into power in the April 2009 elections, now the masses are waiting to see if the same ANC leaders will support the cause of the people, or if they are going to support the cause of profits.

[1] They were proletarianised mineworkers, whose families were left to eke out a subsistence living on marginal land in rural areas revered to as native Reserves, later as homelands commonly referred to as Bantustans.