As in many other Austrian cities (Vienna, Bregenz, Graz, Innsbruck, Salzburg) there was also a demonstration in Linz in solidarity with the mass movement against the Turkish goverment of Erdogan and against the heavy handed crackdown of the police. Over 1,000 people attended this very boisterous and militant demo through Austria's third biggest town on Saturday, June 8. It was organised by different Turkish, Kurdish and Alevi left-wing organisations and cultural groups. 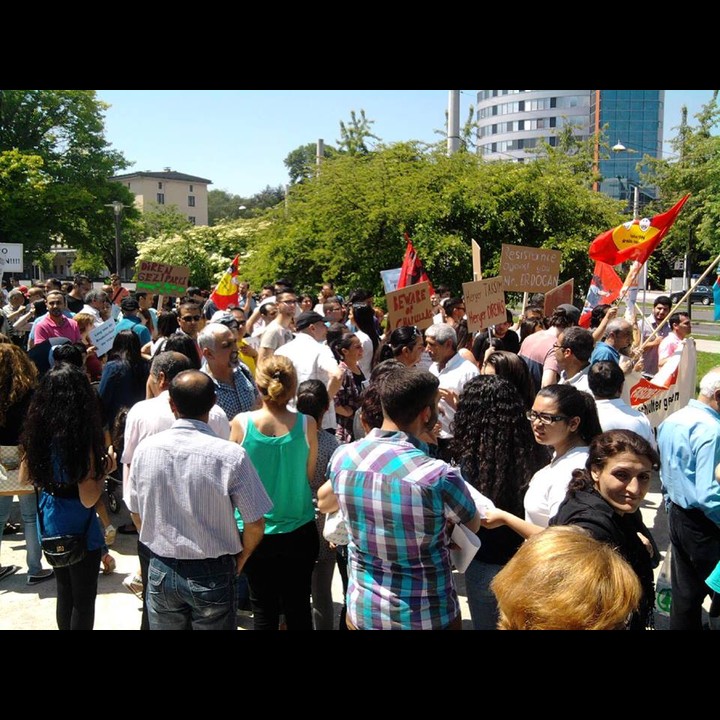 As you can see on the videos, there was a lively clapping and shouting of slogans such as "Her Yer Taksim Her Yer Direniş" ("Taksim is everywhere, everywhere is resistance"), "Tayyip İstifa"("Tayyip [Erdogan] step down"), "Hoch die internationale Solidarität" ("long live international solidarity"). Accompanied by the loudspeakers of the van the people sang Turkish working class songs.

One of the speakers referred to the hypocritical role of the leaders of the European Union, who are shedding crocodile tears because of the use of brute force by the Turkish police against the movement. He said that if they are serious, they could have shown their "democratic" behaviour in their own backyard – referring to the police brutality against demonstrators in many European countries, such as was the case two weeks ago at the Blockupy demonstration in Frankfurt.

In this context it is also a scandal, that according to a report by a worker at Atatürk Airport a cargo plane from Spain full of tear gas canisters arrived in Turkey. The Spanish government can be made directly or indirectly (by not prohibiting the depature of the plane) responsible when those canisters are used against demonstrators in Ankara. This action must to be condemned by the European working class!

The Marxists of Der Funke and the Socialist Youth of Römerberg/Linz joined the demonstration and handed out 300 leaflets, arguing that the movement in Turkey lines up with other movements in the Arab world and Southern Europe fighting against corrupt regimes and a rotten system. We explained in our leaflet, that when we demonstrate here in Austria, we are not only supporting a radical political and social change in Turkey, but that also here, where we live and work, we need this fundamental change. Our politicans still present migrants as "guests". Their income is lower, it is more difficult for them to find a flat or work, and they are discriminated against. This division is deliberate and is aimed at weakening the workers and youth.

In Turkey as in Austria the fundamental problem is a system, that works in the interests of the profits of a small minority. There will be no real democracy as long as capitalists, bankers and corporations are in charge.

Let's support the protests in Turkey and fight together for our emancipation, in Austria, Turkey and everywhere!

Together with the left-wing organisation of Yeni Demokrat Gençlik (YDG) we are going to organise a public meeting on Friday, where an eyewitness will report his impressions of the demonstrations in Istanbul.