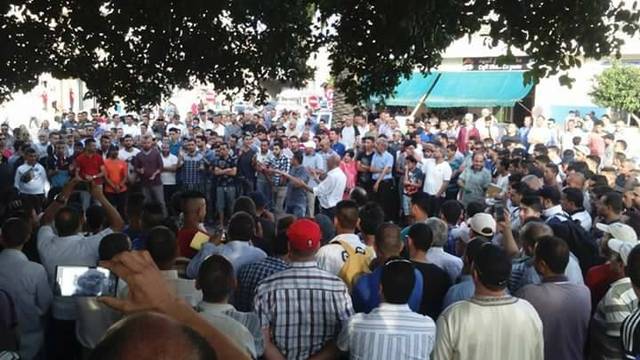 Since last October, Al Hoceima and its neighboring regions have seen a big protest movement. The direct reason behind this has been the crushing of a young fish vendor (Mohsen Fikri) in a garbage container by local officials after protesting the confiscation of his goods. Behind the movement however there are other deeper reasons, such as dictatorship, exploitation, marginalization and unemployment: i.e Capitalism and its state.

This heroic mass movement, which has stood up against all forms of repression and harassment, has inspired the workers and revolutionaries in the rest of the Morocco, where a wave of solidarity struggles has started. This is a nightmare for the ruling class and its state.

After months of mixing repression with empty promises, the state has now moved to reveal its true nature and has increased the pace of repression. Recently, a large wave of arrests has been launched, including most of the leaders of the movement. The state has also resorted to thugs and criminals to attack peaceful demonstrations in many cities.

The detainees in the prisons of the dictatorship are subjected to torture and humiliation. The Moroccan youth and the masses throughout Morocco are attacked with brutal repression. It is our responsibility to struggle to stop this barbarity. We demand the immediate release of political prisoners, a halt on all repression and of the government to meet the demands of the protesters – that is, to punish those responsible for the killing of Mohsen Fikri, stop marginalization and instead build hospitals, schools, employment and other just and legitimate demands.

The International Marxist Tendency calls on all workers youth, revolutionaries and trade unionists to support the struggle of the Moroccan masses. We ask you to take up the struggle in your organisations and pass solidarity messages, to spread awareness about the repression and to expose the reactionary nature of the regime in Morocco.

An injury to one is an injury for all!

Send letters of solidarity to:

As well as a copy to contact@marxist.com and contact@marxy.com to pass on to the activists in Morocco to let them know that they are not alone.