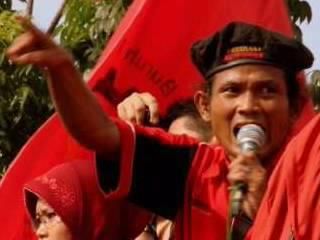 The recent criminalization case of comrade Sultoni Farras, a worker activist from Progresif Union and Sekber Buruh, who is being sued with “Unpleasant Action” law by the bosses, puts forward a question that at first seems petty but if we look further turns out to be quite fundamental in the workers’ struggle. This relates to the question of “pleasantness” and “unpleasantness”. (Note: in Indonesia, the word “pleasantness” can also mean “happiness”)

It can be said that the question of happiness makes up the basis of human life. Every human being with all their efforts wants to seek happiness, and therefore also seeks to avoid unpleasant things. From primitive era to today’s modern era, from our primitive ancestors who wore nothing but loincloth to today’s suited men and women, everyone seeks happiness, physically and spiritually. With their both hands, who bestow upon them the ability to labour, human beings from all periods pursue happiness: which is to be free from hunger (food), to be protected from the searing heat of the sun and the cold breeze of rain (house), and to cover their bodies (clothing).

This pursuit of happiness is the thing that keeps pushing the whole society as a whole forward. However, in history, society doesn’t proceed in a straight line, where all layers of the society works hand-in-hand to pursue their common happiness. No! Since slave society ten thousand years ago until now, there are two classes in society that in their pursuit of happiness are locked in an irreconcilable struggle. They are the oppressor and the oppressed: slave owners and slaves, landlords and peasants, and today capitalists and workers.

What is pleasant for the workers is unpleasant for the capital owner, and vice versa. Workers are happy to earn high wages, the capitalists are happy to receive high profits. Basic economics lesson says that wages and profits are irreconcilable. The scenario of mutual happiness between the workers and the bosses is merely a dream, and even a trick for the oppressed to not struggle for their interests. We often hear from politicians or smart pundits – and worse even, some labour leaders – who say that we can have a society where workers and capitalists hold hands and sing “Kumbaya”. The arrest of comrade Sultoni, who is fighting for the workers, with the “Unpleasant Action” law is a testament to how utopian this scenario of mutual happiness. If they wish so much for workers and bosses to be in a society where they can be happy together, let them also be ask the capitalist to suffer together with the workers: work in factories, from 8 to 5, hauling heavy sacks of cement, live in 3 by 4 meters barrack-like room, and paid minimum wages.

Comrade Sultoni – and many other labour activists who have been charged with this law – in reality have done the correct things by committing unpleasant action, that is unpleasant for the bosses and their state. In today’s society, the law actually means “Unpleasant Action Toward the Ruler”, and as long as the capitalists rule then those who will fall victims to these laws are the other classes: workers, peasants, and urban poor. There is no such thing as a neutral law. Today’s law is written by the capitalists and for the interest of capitalists. We shouldn’t fall under the illusion – spread by the men and women of law – that this law is to serve the people in a just manner.

The “Unpleasant Action” law will only serve the toiling masses if the workers are in power. Thus, when a boss refuses to pay decent wages to the workers, he or she can be charged under that law because he or she is making workers’ stomach unhappy, growling every day because of hunger. If the bosses fire workers or close factories because the workers organize trade unions, then workers can charge them with unpleasant action. If peasants’ land is being forcibly taken from them, then those large palm tree plantation owners can be sent to jail for making the peasants feel unpleasant.

Below is a solidarity call for comrade Sultoni (from KPO-PRP) that we ask the readers to act upon. As this article is being published, on Monday (29/1) hundreds of workers protested in front of Bekasi police station against the arrest of Sultoni. The police answered the protest with violence and threat of arrest. The pressure has workers, as the police temporarily allow Sultoni to go home that night.

Sulthoni Farras is a worker that became a victim of layoffs at a company in the capital city of Jakarta when the crisis hit in 1998. Despite this, he continued with the struggle by building the cross-sector union that later became the union Federation Progresip under the confederation KASBI. Sulthoni also encouraged unity of workers and at the time took part in the uniting of unions in the alliance Aliansi Buruh Menggugat (ABM) and became the coordinator of ABM in the larger Jakarta region. This unity is now embodied in the development of the Greater Jakarta Workers Joint Secretariat (Sekber Buruh) in which Sulthoni is a presiding member. In 2009 Sulthoni Farras also received a legal aid award, awarded to those that consistently struggle for human rights, including the rights of workers.

True liberation of the working class is not possible without a political struggle and a the establishment of a political party for the working class. Because of this belief, Sulthoni joined the Working Peoples Association that later developed and led to the formation of KPO PRP. Sultoni sits on the national committee of KPO PRP.

One of the struggles that Sulthoni was active in and that led to the criminalisation, was the liberation of PT Dongan workers from the system of contract work and wage theft by the owner of PT Dongan, Park Jung Sik.

PT Dongan employs approximately a thousand workers, mostly women. The plant produces quality wigs for export. Before establishing a union, the workers of PT Dongan were like slaves. Their employment status was unclear despite several years of work at the plant. They were still considered contract workers despite having worked there for between four and ten years. Their wages were always being cut for various reasons, such as for transport and catering. Meanwhile, the government through the Department of Labour, shut their eyes to what was happening.\

Amid the rising labour movement in Indonesia, workers at PT Dongan became increasingly aware of their rights and power. Starting slowly but surely, the workers at PT Dongan began to consolidate. At first, only dozens of workers met to discuss their rights and the possibility of forming a union, until finally a conference was held and attended by the majority of workers of PT Dongan.

After the conference that established a union, the threats began to haunt them. The company planned to get rid of all workers on contracts. This troubled, and then made the workers angry. The threats continued, even though the workers had been employed there for years. Triggered by the intimidation the workers of PT Dongan became active and forced the company to meet all their basic rights and also make all contract workers permanent workers.

On the 7th of September, 2012 negotiations between the workers and PT Dongan took place going until 9:30pm. From those negotiations it was agreed that all rights (maternity leave, an end to wage cutting for transport and food, provision of food and drink and so on) would be provided). A joint agreement was also decided upon by both sides.

However, in the development of the company PT Dongan, the company has responded by denying these agreements and criminalising the active union workers of PT Dongan. Sulthoni Farras was then determined as a suspect in line with article 335 KUHP, misconduct, by the Bekasi police.

Send your solidarity statement to: kpo.prp@rakyatpekerja.org

Provide solidarity by changing your Facebook profile picture with a photo of Sulthoni Farras.