Belgium
Share
Tweet
HOV Belgium participated in organising a large meeting of some 350 people in solidarity with the Venezuelan Revolution. With a packed agenda, important speakers from both Belgium and Venezuela spoke on the revolution and the need for solidarity. Meetings such as this show concretely that the ideas and the message of the Venezuelan revolution are spreading well beyond the borders of the Latin American country.

Until a few years ago, Venezuela was a blind spot on the world map for most left activists. Today, it has become the point of reference in the struggle for a better society. On December 9, 350 people gathered in Brussels to learn more about the Bolivarian Revolution.

This day of solidarity took place at the headquarters of the Christian union ACV/CSC in Brussels. Guy Tordeur, secretary of the Christian union ACV Brussel-Halle-Vilvoorde, stated that in Belgium too, the working class falls victim to neo-liberalism, and that the recent events at the Volkswagen factory in Vorst are a clear example of this. For this reason, Tordeur is very happy with Chavez's victory, because Chavez "is trying to build a genuine alternative". He was also delighted to be able to introduce Ruben Linares, a speaker from the Venezuelan trade union, the UNT. Now that the new trade union has seen the light of day, Tordeur stressed that there is an opportunity for the ACV to urge for the official recognition of the UNT as the real trade union in Venezuela.

Next up, Katia Nouten of Oxfam Solidarity, introduced the four guest speakers at the plenary session: the American sociologist Gregory Wilpert of www.venezuelanalysis.com, the Venezuelan ambassador in Belgium, Alejandro Fleming, Ruben Linares of the UNT, and Frans Wuytack, a Belgian priest who actively took part in the struggles in the working class districts of Caracas.

Gregory Wilpert started by saying that never before has a Venezuelan president been elected by such a large margin. He continued by summing up the many achievements of the Bolivarian Revolution in laying out the vision of "Socialism of the 21st Century", which is a core discussion in Venezuela today. He stressed that Venezuela is already transcending capitalism, for four reasons: 1) Venezuela has no need for foreign investment, 2) Venezuela doesn't tag along behind the old elite, 3) the Venezuelan government is centred around participatory democracy, and 4) there is a clear move towards "cogestión" (co-management) and co-operatives. One million Venezuelans are already working in co-operative structures. There are still various obstacles that lie ahead on the road to socialism; the external obstacles, as Wilpert calls them, like imperialism, the opposition on the world market, are quickly losing ground and have diminished in influence. The main - internal - obstacles are nepotism and corruption within the state apparatus and the dependency of the Bolivarian movement upon one sole person, i.e. Chavez. So the challenge today is to structurally consolidate the revolution at a grassroots level.

Ambassador Alejandro Fleming mainly spoke about the revolutionary process. Chavez himself has filled the ideological void which existed before. But the old state apparatus is corrupt, so that even today, people cannot make full use of it. Yet, this is changing as well. The people themselves are the engine of this process. That is why the government dedicates so much effort to education. A people that is kept in a state of backwardness, will always be prone to manipulation by a populist leader. In saying this, Fleming threw one of the main points of criticism of the opposition - i.e. that of Chavez being a populist - back in their face. Fleming also defended the Venezuelan government's international measures, that were ill received by the press. "We stepped out of the Andes Community because it defends the interests of the rich." The Venezuelan government's priorities clearly lie elsewhere.

Trade union leader Ruben Linares started his speech by describing an excursion he made in Belgium. Upon arrival, Erik Demeester (Vonk Hands Off Venezuela Belgium) had guided him to a picket at the Volkswagen assembly factory and concluded: "VW is the kind of answer that capitalism gives to the people, i.e. exploitation and looting." After that, he explained how the Bolivarian revolution had grown out of a spontaneous uprising. In 1989, the people thought: "This country is rich with oil, and yet we are hungry." That is why they took to the streets, but the government brutally suppressed it. 4,000 people lost their lives. The new movement around Hugo Chavez was the people's response. Today, every Venezuelan has a weapon to fight back, and Ruben took out his weapon to prove this: the Bolivarian constitution. When the rich or the state try to violate their rights, the people quote from the constitution. On December 3, 63 percent of the population voted for socialism. For many it isn't entirely clear what this means yet, but most of the people already see the clear difference with their earlier lives, and have come to the conclusion that socialism is something good. Linares ended his flaming speech with Che Guevara's infamous words: "Socialism or death", which was welcomed by the most thunderous applause that day.

Before Frans Wuytack started his speech, the participants of the meeting watched a promotional trailer for a documentary about his life, made by his son Fabio, who reconstructed his father's life and work in the working class districts of Caracas, and linked this up with today's events. "I am not an expert on Latin American economics or politics," Frans Wuytack stated, "but I am here today to give testimony to the courage of the Venezuelan people!" He pleaded that the people not submit themselves to the bourgeoisie. "Have we become the altar boys of capital?" said the former priest. He referred to Chavez's speech to the United Nations, and to the Belgian prime minister Verhofstadt who kisses the hand of Bush. Frans spoke about his experiences in Venezuela during the 1960s, about the struggle for better living conditions in the working class regions. It was a time when thousands of people marched to the city centre to demand drinkable water. The police asked: "Do you have an authorisation to demonstrate?" And there reply was: "No, we don't... but we are thirsty!" At the time, the people were not able to win their demands. This changed when a woman walked down from the hills carrying her dead child in her arms and followed by her other children. She walked many kilometres and refused to move until she spoke to the person in charge. Thousands of people came to support her and soon the pressure was too heavy to resist and the authorities had to bow. One woman had started this. From this experience Frans concluded that the struggle is worth it, every day, again and again.

After the speeches, time was given for questions from the floor. From most of these questions, it was clear that the participants wanted to learn more about the Bolivarian Revolution, and also that the process in Venezuela generated a lot of enthusiasm. One woman asked - she almost begged - how we could transplant this experience to Belgium?

Partly due to the lack of time there was no time for contributions from the floor, only questions. This is a pity because debating and exchanging ideas corresponds to the living spirit of the Bolivarian revolution and by extension to every revolution.

Ruben Linares was a living witness to the importance of ideas in the revolution and the importance of reading. He referred to Chavez's own way in stimulating reading and debating. On television he tells for instance: "I'm not Trotskyite but I read Trotsky, I'm not a Marxist but I read Marx. And I read Rosa Luxemburg etc." Ruben Linares also referred to the debate Chavez has started about the need for one party regrouping all the revolutionary forces (something completely different is told by the bourgeois media who present his proposal as a way to establish a one party state). The trade unionist explained that this proposal stimulated the debate in the Bolivarian movement about the kind of party that was needed to take the revolution forward. "But the landless peasants say that they don't want to be in one party together with the big landowners who oppress them and the workers don't want one party with the bosses". These debates sharpen the ideological understanding of the tactics and the forces needed to advance the revolution. 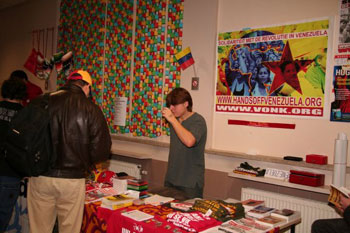 This plenary session was followed by two workshops and the screening of different documentaries. One workshop dealt with the role of the media in informing the world about Venezuela. Ronnie Ramirez, Maurice Lemoine and Michel Collon explained the role of the media in the Bolivarian revolution and the lies of the media against the process. Ruben Linares was the central speaker in the workshop on trade unions. Ruben sketched the birth of the UNT and the debates going on in the revolutionary union. Bruno Verlaeckt from the Socialist Union in Antwerp, which organises the building workers, petrochemical plants, etc. as well as Omer Mommaerts from the Christian Union of Brussels stressed the importance of the struggle of the workers movement in Belgium.

At the end of the meeting a debate was held which was led by Erik Demeester and different speakers shed light on various aspects of the Bolivarian revolution. Socialist Party senator Sfia Bouarfa, an international observer of the Venezuelan elections, certified that the elections were very democratic. Her Green colleague, Josy Dubié, confirmed this but added that in Venezuela the good slogans of the anti-globalistation movement - to give back the wealth of the country to the people- was becoming reality. Paul-Emile dealt with the relationship between Venezuela and the European Union. He reminded us that the EU had approved the military coup in 2002 against Chavez. During the recent debate in the United Nations on the membership of Venezuela on the Security Council all European countries (with the exception of Italy who abstained) followed the position of the United States. The program of the EU for Latin America is to create a free trade zone, something different from ALBA, which should serve as an example of the way forward. Marcelo Estrada from Bolivia explained how his country was developing relations with Venezuela and Cuba within ALBA. He concluded by saying that a new era has been opened up for the peoples of Latin America. A representative of the Cuban embassy formulated an important idea shared by all the organisations that participated in the meeting. "Even if we sometimes have different ideas, what brings us together is the support for the political process in Venezuela". At the end the four speakers from the opening meeting intervened. Ruben Linares, the last speaker of the day, concluded with the cry, "Socialism or death!" A thunderous standing ovation and the singing of revolutionary slogans marked the end of the day.

Undoubtedly this day of solidarity represents a serious step forward for the movement in solidarity with the Venezuelan revolution. Hands Off Venezuela is now proposing to continue organising meetings and solidarity based on the example of the successes in Antwerp and Brussels and to extend the message of the Bolivarian revolution to other cities in Belgium.

View a picture gallery of this event