Details
In Defence of Marxism
21 November 2006

Mexico
Share
Tweet
Pickets in solidarity with the struggle in Oaxaca took place in several countries yesterday. Today we provide reports on pickets in London, Moscow and Athens with more to follow soon.

Picket of Mexican Embassy in London

On Monday, November 20, more than 40 people gathered at the Mexican embassy in London in support of the National Democratic Convention and the APPO of Oaxaca, Mexico.

The National Democratic Convention (NDC) held in the Zocalo Square of the Mexican capital on September 16, and attended by more than one million people, voted that Andres Manuel Lopez Obrador (AMLO) should swear in as the legitimate president of Mexico on November 20, which he did yesterday in the same Zocalo Square before tens of thousands of supporters.

At the swearing in ceremony Lopez Obrador announced his 20-point programme. At the top of the list was the call for "the renovation of the public institutions, the call for a national debate and the promotion of a referendum for a new constitutional framework".

He also expressed his desire to organise millions of representatives around the country through the NDC's. "Our movement ‑ he said - is born out of our decision on July 2 to remove the illegitimate government and start building a new republic."

The picket of the Mexican embassy in London, which had been called by the Hands Off Venezuela campaign, as decided at the Second National Conference,took place between 5pm to 6.30pm and attracted a wide range of people from all political orientations and backgrounds. This time, in contrast to the previous picket, there were no arrests and the drummers filled the street with their rhythms from beginning to end. 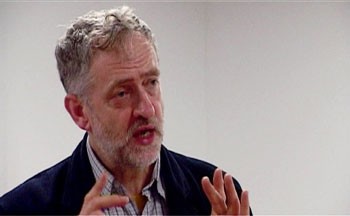 Later in the evening a meeting was held at the NUJ headquarters. Rob Sewell, a steering committee member of the Hands Off Venezuela campaign, introduced Jeremy Corbyn MP. Jeremy, who is a member of the John4leader platform within the Labour Party is an expert on Latin America and was present at the NDC on September 16, when it was unanimously decided that AMLO would swear in as the legitimate president of Mexico. (See Mexico: 1 million strong Convention elects "legitimate government")

Jeremy Corbyn started his speech by giving a background of the struggles behind the PRD and the achievements of Andres Manuel Lopez Obrador as mayor of Mexico DF, "where - Mr Corbyn said - he had built 40,000 council houses, when in that same period none have been built here". He said that the forces behind López Obrador were the same radical forces that are sweeping Latin America and recognised the enormous challenge that the movement of the masses and the NDC poses the current Mexican institutions.

He concluded that we must be very supportive of this struggle and of the NDC's decision to present a fight against the electoral fraud and moved to elect AMLO as the legitimate president of Mexico.

After Jeremy Corbyn's speech a documentary film about the struggle of the people of Oaxaca against the State governor, Ulises Ruiz, was screened. The film, which mainly focused on the APPO (Popular Assembly of the People of Oaxaca), its origins, aims and the repression it faces, was welcomed with a huge round of applause when the lights came back on. 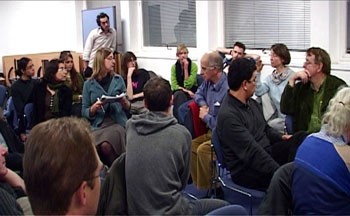 This was followed by an open and lively debate about the character of these struggles in Mexico and the way to build up solidarity with them in Britain.

There were many different opinions expressed. From those who considered that the struggle against the electoral fraud and the struggle of the people of Oaxaca were rooted in the same problem, the malaise of the world capitalist system, and that, although expressed in different ways because of their particularities, these struggles will have to be linked up if they are to be successful, to those who considered that only the struggle of Oaxaca and the APPO were worthy of solidarity and sympathy, since it epitomised a real movement from below in contrast to the movement form above that the NDC seemed to represent; to those who believe that the best way to build up solidarity is to fight in Britain to change the structure of our society, and finally those who believed that solidarity had to be "kept out of politics".

At the end an email list was put together with the intention of coordinating the solidarity movement with Mexico and a new day of action was called for December 1.
[Hands Off Venezuela also published a report of the picket and meeting ]

Picket in Moscow outside Mexican Embassy

On Monday November 20 a petition (see below) was handed into the Mexican Embassy signed by supporters of the International Marxist Tendency, the socialist movement "Vpered" and the CWI. We were spoken to by a policeman who said he didn't know how to help us but advised us to go to the consular section. This turned out to be good advice since after Russian holiday makers had left and the consular official had stopped explaining the procedure for receiving visas on the telephone she read the petition, asked us to state clearly who it was addressed to and told us to enter the main door. There Tatiana Kabanova, the Embassy's press secretary, received the petition. She asked us to write down our contact details for the Embassy which we duly did, and then left, looking forward to reading the latest news about the struggle in Mexico and other solidarity actions internationally.

We, the undersigned, are inspired by the revolutionary events that have taken place in Mexico, especially the struggle of the teachers in Oaxaca province and the magnificent mobilization in support of Andres Manuel Lopez Obrador's presidential campaign. In July when the rigged election results were announced we organized a picket of the Mexican Embassy to protest against the falsification of the results. We are still concerned by the undemocratic policy of the current government, and fully support every measure taken by the people in their fight against the illegal machinations of the state.

In particular we express our complete solidarity with the heroic class fighters in Oaxaca, where federal police and government troops have been sent in to repress the teachers, who had the support of the local community in running to affairs of the city.

This is why we request the Mexican Embassy in Moscow pass on to the authorities in Mexico the following demands:

1) An end to government repression against Oaxaca workers

2) The transfer of presidential power to Andres Manuel Lopez Obrador 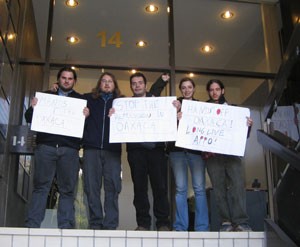 We organised a protest outside the Mexican embassy about the events in Oaxaca. The ambassador was not there but we left a letter of protest with the secretary of the embassy. It was signed by 28 trade unionists and members of the Left (Pasok, KKE and Synaspismos). Among them was the vice president of GSEE (Greek Trade Union Confederation) Alekos Kalivis and the ex-MP of Synaspismos and member of the Secretariat of the party, Panagiotis Lafaganis.