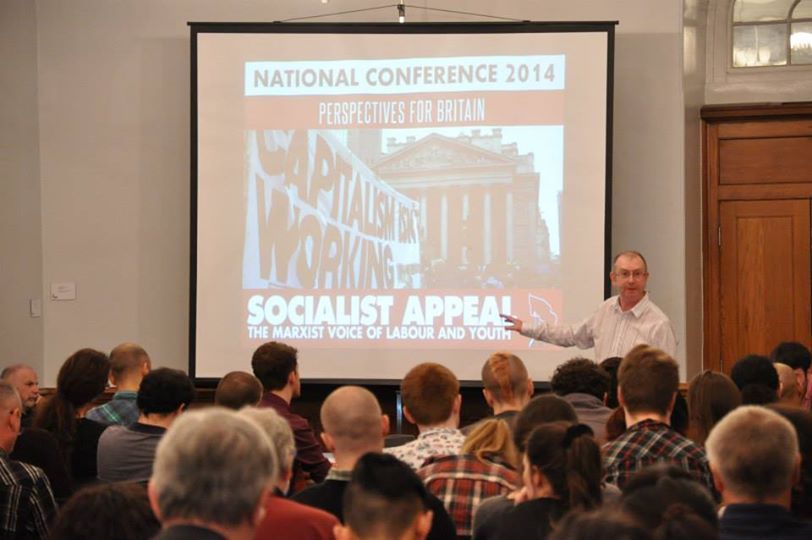 This year’s annual conference of Socialist Appeal supporters and sellers saw another record turnout. Over the weekend of Saturday 5th and Sunday 6th April, more than 120 Marxist activists convened in London to discuss the perspectives for revolution and the organisational tasks at hand for the Marxists in Britain.

Throughout the conference, the growing role of young activists was unmistakable, while the level of political insight was second-to-none. Marxist ideas have the power to cut through the present situation with necessary answers to the crisis of capitalism, and are increasinly upheld by a strong base of youth all around the country. These factors provide great cause for optimism.

The first discussion of the conference was on British Perspectives. Rob Sewell, editor of Socialist Appeal, began the discussion by stressing the importance of linking events in Britain to those on a world scale. With that in mind, he used the example of the crisis in Ukraine, a perfect case of capitalism’s inability to find a solution to its inherent contradictions, to show what an incredibly weak state Western – in particular British – imperialism has been reduced to. And yet the British ruling class continues to drive savage attacks on workers’ living standards and has plans to continue to do so for the next decade at least, but there is relatively little struggle offered in return.

Many contributions in the discussion explained that the complete political bankruptcy and ineptitude of the current leaders of the labour movement in Britain is the reason for the current ebb in the class struggle. Ed Miliband has given little hope to the working class. On the few recent occasions he has suggested mild reforms, Labour has experienced a surge in the polls. Despite this obvious litmus test, he generally finds it much easier to cede to the interests of big business.

The industrial disputes which have taken place in the recent period have been under the direction of union leaderships without any clear programme. Such labour leaders have de-escalated struggles under the slightest pressure from the bosses. Meanwhile, any movement soon runs out of steam without a plan or strategy for how to win. These deplorable tactics have demoralised union members and could have disastrous effects. But a perspective often pointed out was that the working class in Britain already understands far more than its leaders, and already stands far to their left. Some comrades described some trade union initiatives, with the involvement of Socialist Appeal supporters, that have already been taken from the ground up by workers who aren’t provided with a lead from the tops of the unions. 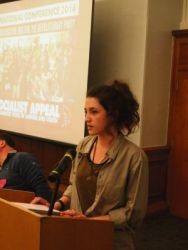 In addition to perspectives on the labour movement, the question of Scottish independence was highlighted. Scottish supporters of Socialist Appeal pointed out during the discussion that Scotland would be no better off leaving Britain on a capitalist basis, and that such a move would be detrimental to the unity of the British working class. Nevertheless, comrades did raise the point that a majority ‘Yes’ vote is a possibility we should prepare for. The question must be understood fully, not least because many ‘Yes’ voters are class conscious and understandably angry at the established parties which have formed a coalition advocating the ‘No’ vote.

The conclusions to draw from these perspectives on Britain are in the final analysis hopeful ones: there has never been a greater need for the ideas of Marxism in Britain than now, and the voice to argue for these ideas is getting louder year on year. 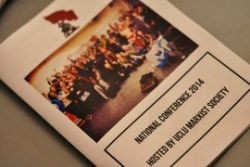 One of the biggest successes for the supporters of Socialist Appeal in the last year has been the founding of the Marxist Student Federation (MSF), an organisation to which all student Marxist societies in the country are affiliated. It is Socialist Appeal supporters in the universities that have taken the initiative to set up Marxist societies, which are now organised under the national banner of the MSF. Many of the supporters at the conference were students and young workers attending for the first time, having recently joined a Marxist society and the MSF; several of these young activists gave outstanding reports and perspectives based on the previous months’ activity with the MSF.

Not only did the federation hold its founding conference in February, with more than 70 in attendance, including visitors from across Europe, but the MSF has already been extremely active in its first year of existence. National affiliation has provided student and young worker comrades with a network through which to co-ordinate interventions in the student and labour movements, best exemplified by solidarity picketing outside universities for the recent higher education strikes.

This work represents a beginning of the natural tendency of revolutionary students to turn towards the labour movement, and provides great experience to students for their future involvement in working class struggle itself. As was pointed out by Alan Woods, Marxist author and writer, regardless of particulars, Marxists are first and foremost neither students nor workers, but communists.

Forward to the Fortnightly

In light of the current “Forward to a Fortnightly” campaign, the conference agenda was changed this year from the usual programme, as a separate World Perspectives discussion was eschewed in favour of a longer discussion on the Socialist Appeal newspaper. At last year’s conference the plan to work towards the increasing of production from one paper issue per month to one per fortnight was announced, and the launch of the fortnightly campaign at the beginning of this year is putting that plan into practice.

Producing a paper every two weeks will represent a massive step forward for the Marxist tendency in Britain. It will lay the basis for a much larger intervention in the labour movement, which will be much needed given the perspective for the increasing intensity of the class struggle. But such a step is only possible with – and is truly reflective of – the quantitative and qualitative growth in the supporters of Socialist Appeal: ultimately the determining factor in how big an impact the paper makes.

However, as national paper organiser Ben Peck explained, the paper itself is the primary means for collective organisation in building a Marxist tendency in the movement. Lenin likened the Marxist paper to “to the scaffolding round a building under construction, which marks the contours of the structure and facilitates communication between the builders, enabling them to distribute the work and to view the common results achieved by their organised labour.” The array of impressive results achieved by Socialist Appeal supporters in the last year were reported at the conference, from paper sales to interventions in the student and trade union movements. Such achievements demonstrated beyond doubt that it is ready to expand to a fortnightly.

The final session of the weekend was introduced by Fred Weston, editor of www.marxist.com, who gave an overview of the progress being made by the Marxists in other countries as part of the International Marxist Tendency.

Fred reported on the growing influence of Marxist ideas in America, highlighting that workers and youth in the USA are increasingly questioning capitalism at a time when US imperialism is in decline. The role of the Marxists throughout Latin America was also commented on, particularly in Brazil, where supporters of Esquerda Marxista (The Marxist Left) have made a bold intervention in the mass movements taking place in the last 12 months.

The successes of the Marxists in Greece, organised in the Communist Tendency of SYRIZA, were also reported. The Greek comrades have also recently moved to a fortnightly paper, which is even being distributed in kiosks across Athens, and are playing an important role in offering a genuinely revolutionary programme inside SYRIZA.

The most impressive successes reported, however, were those of the Marxists in Pakistan - organised as “The Struggle” - who are having to fight for socialist ideas in the most extraordinarily difficult conditions, facing the daily threat of terrorist attacks and drone bombings. Nevertheless, the Pakistani comrades have built an impressive organisation which is intervening on a leading level in all major struggles of workers and youth across the country .

Overall, the picture for the forces of Marxism across the world is one of growth and success. Fred concluded by highlight that in every country there is a common radicalisation amongst the youth, who are being more affected by the crisis than any other layer. The task for the Marxists is to reach these radicalised youth and offer them a revolutionary way out of the crisis. 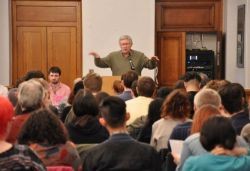 Several supporters remarked from the floor – and many more informally – that this was by far the best conference Socialist Appeal had ever held. The palpable level of enthusiasm in the room, the sheer number of young comrades, and the confident mood amongst attendees made for an extremely uplifting weekend.

Alan Woods finished the conference by echoing the sentiment of others about the quality of the conference. Moreover, he quoted a young comrade from Edinburgh to issue a warning: “If you lose faith in the working class, you have nothing.” Thanks to the ideas of Marxism, Socialist Appeal supporters have an immense confidence in the revolutionary potential of the working class in Britain and internationally. It is this confidence in the ideas of Marxism and in the power of the working class that makes Socialist Appeal supporters the most optimistic people in Britain.