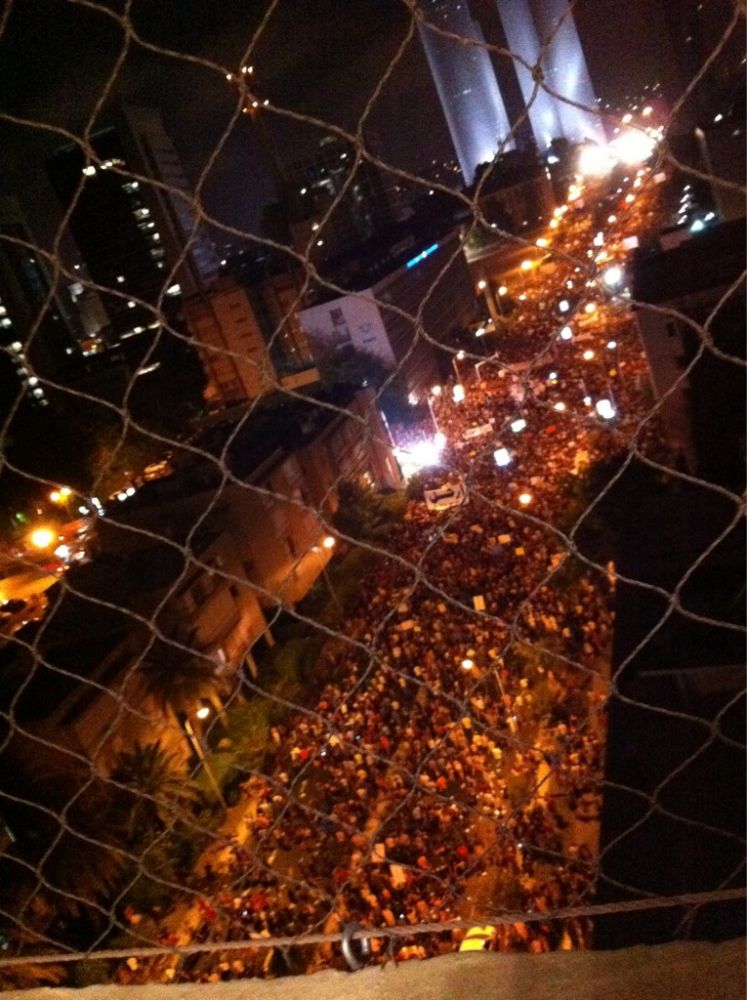 Incredible scenes in Tel Aviv. On Saturday, August 7, over 300,000 took to the streets of a city with a population of less than half a million. Other demonstrations also took place on Saturday, with 30,000 gathering in Jerusalem, and thousands gathering in other cities across the country. The total figure of demonstrators is difficult to estimate, but it could be anything between 400,000 and half a million, in a country of 7.7 million inhabitants. Amongst the familiar demands for “social justice”, a number of banners could be seen bearing the slogan, “Resign, Egypt is here.” Tellingly, resign was written in Arabic.

Opinion polls show up to 90% of Israelis support the movement. This would seem an astonishing statistic in such an ethnically and socially divided country as Israel. However, the severe crisis of Israeli capitalism has created dire conditions across the board.

"It's hard to live in this country, we go to the army, work and pay high taxes and still don't earn enough to finish the month financially," says student and bar-worker Ehud Rotem. Grandmother Betty Eppel agrees: "It's true that we don't have much unemployment but the wages are so low that we work really hard and can't finish the end of the month."

“The average Israeli salary is about $2,500 per month while teachers and social workers typically earn less than $2,000 a month. Rent on a modest three bedroom apartment in central Jerusalem can cost upward of $ 1,500 per month and more in Tel Aviv.

With 20% of the population living below the poverty line, and pensioners reduced to rummaging through dustbins for food, the ‘dream’ of a Jewish homeland has become a nightmare for poor and working-class Jews.

As with the revolutionary movements in Egypt, Greece and elsewhere, the ‘moderate’ figures pushed to the fore seek to keep things within ‘safe’ channels. "We're not demanding a change to the ruling coalition,” said National Student Union Chairman Itzik Shmuli as he addressed the crowd, “We're demanding human economic policy that doesn't destroy people, that can see people's distress and that doesn't only crunch the numbers." 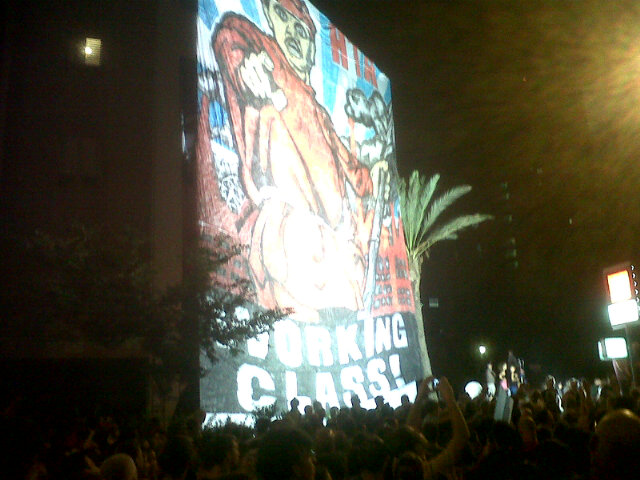 working_class But the masses are much more radical. The plethora of chants included, "People before profits," "Social justice for the people," "Working class heroes," and "The cure for privatisation is revolution.” A huge placard could also be seen copying a famous Soviet Red Army recruiting poster, bearing the words, “Working class.” In Jerusalem, supposedly a bastion of reaction and religious extremism, protestors could be seen carrying the red flag. Despite the propensity of the Israeli media to talk of a ‘protest of the middle-classes’, there is clearly growing class-consciousness amongst the working class.

Programme of the movement

As with the recent revolutionary upheavals across Europe and the Arab world, a common feature is the seeming unity of all classes against a regime that is no longer able to satisfy any section of society. In common with the other uprisings, much of the initial organisation was done via Facebook and word-of-mouth. Despite this looseness of organisation, the movement has coalesced around a set of concrete demands:

These demands have been drawn up by the students union, which has found itself pushed to the head of the movement. What is missing, however, is any explanation of how they are to be achieved. Israeli capitalism, the system which enriches a tiny handful at the top, whilst keeping the vast majority of Israelis living hand-to-mouth, and perpetuating a brutal occupation of the Palestinians, offers no way out. This movement is a direct challenge to the authority of the state, and to capitalism itself.

These concrete demands, therefore, should be linked to the question of the capitalist system by asking the obvious question: how can they be funded? The only answer is through the nationalisation of the banks and big monopolies under democratic workers control, so that the country's wealth can be used to solve the problems of the majority. 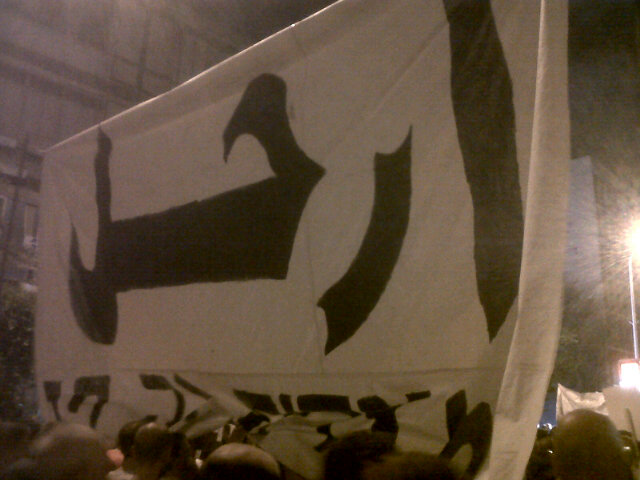 Egypt is here Many of the people protesting on the streets have already drawn the conclusion that Netanyahu’s government must go. We agree. But protests alone, no matter how big, are not enough to topple a government. As shown by the experience of the Arab revolution, what is needed is a decisive intervention by the organised working class. The strike of the municipal workers on Monday last week was a first step. Now the Histadrut must call a general strike.

At the same time, the movement needs to get organised if is to be sustained. Action committees should be set up in all neighbourhoods and workplaces and these should be linked through elected representatives at a local and national level.

The movement has focused on the demand for Netanyahu’s resignation as the way forward, but if the Netanyahu government falls, what will replace it? ‘Centrist’ Kadima have opportunistically latched onto the protests to attack the ruling Likud coalition, but despite their criticisms of ‘neoliberalism’, they offer no alternative. The Labour Party has been in decline since the economic crisis of the 1970s smashed the cosy relationship between the labour movement and state (see the section on Labour Zionism in Israeli workers and youth join the revolutionary wave). Without the Israeli state guaranteeing a virtual monopoly of jobs for unionised Jewish workers, the Labour Party had no alternative but to pursue right-wing free-market policies. Over the past decade, it has propped up numerous right-wing governments.

The Israeli Communist Party have been the only political force in Israel to consistently oppose the attacks on Israeli workers and poor, and the occupation of the Palestinians. Whilst still small, they have been growing, and their strong showing in the 2006 municipal elections in Tel Aviv shows they have a basis of support, particularly amongst the youth. However, it is one thing to criticise the right-wing, another thing entirely to offer an alternative; the Communist Party do not have a clear programme of how to change society.

The Communist Party should stand on a clear socialist programme:

Che Guevara banner Such a programme would win mass support, and go a long way towards addressing the needs of the people in the region. The movement in Israel must reach out to the downtrodden masses in Palestine. Israeli Arabs are participating in the movement, but an uprising in Gaza and the West Bank, supported by the Israeli workers and poor, would deal a serious blow to capitalism in the region.

Some supporters of the Palestinian cause have criticised these movement describing as a “cynical uprising of the privileged” who while oppressing the Palestinians “attempt to pose as being oppressed themselves” and argued that it should receive no support from the Arab revolution at large. This point of view has nothing to do with revolutionary Marxism and does not take the Palestinian cause one step forward.

As the movement develops, those participating in it will inevitably start to make the link between their struggle and the national oppression of the Palestinians. This has already started to happen. Some are asking why the same government that spends millions every year in the settlements does not have money for social housing. As police started to arrest activists still blocking the streets after the massive demonstrations in the last couple of weeks, the people chanted back “police state, police state”. Many will now wake up to the fact that this state which is supposed to guarantee them “security” against the “terrorist threat” coming from the “Arabs”, is in fact protecting the ruling class against the majority. 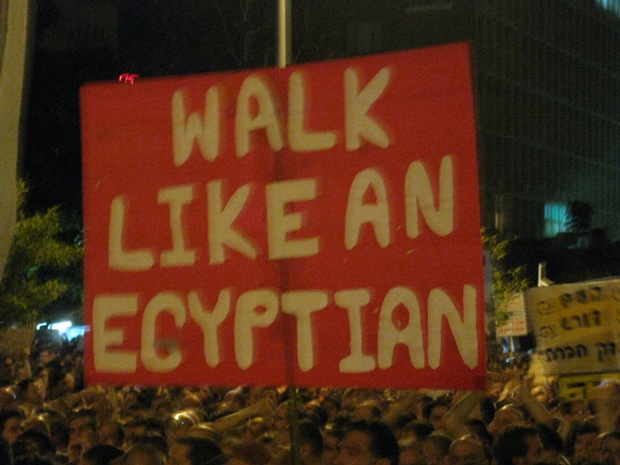 Walk like an Egyptian The chants of “Mubarak, Assad, Bibi Netanyahu” reflect the fact that the Israeli social justice movement identifies with the Arab masses who have overthrown their own dictators. Banners in Arabic in Tel Aviv declare “Egypt is here”, another read “Walk like an Egyptian”, something which would have been unthinkable less than a month ago. The main slogan of the movement has already become “the people want social justice” which is chanted as “ash-shaab yureed tzedek khevrati", the first half in Arabic, copying the most famous slogan of the Arab revolution “the people want to overthrow the regime”.

This movement, unprecedented in the 60 years of history of the state of Israel, has already gone very far. Its continuation can only push it in a more anti-capitalist and revolutionary direction. What is needed now is to build a leadership that is up to the tasks posed both by objetive conditions and the demands of the movement. Even a small group of Marxists, in these conditions, if working skilfully and connecting with deeply felt aspirations of the mass movement, would have a big impact.