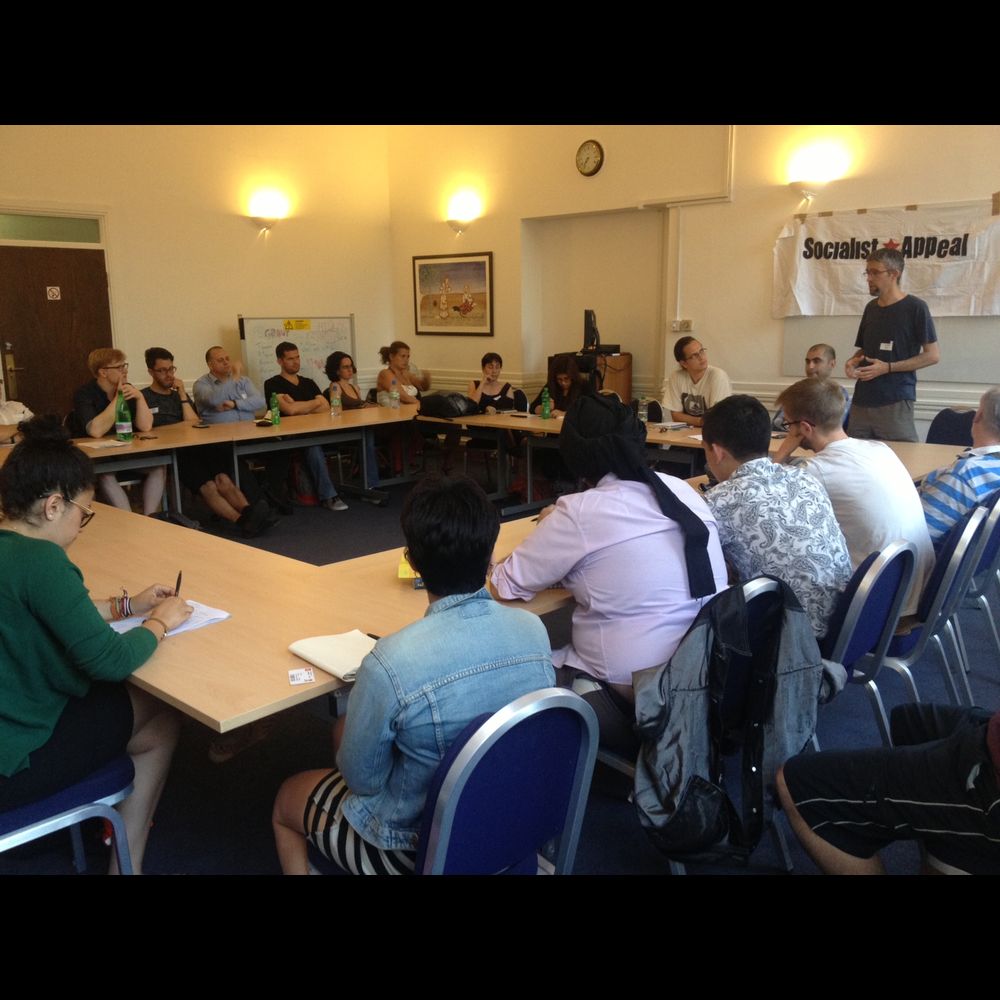 On Tuesday 09th of July Socialist Appeal and the SOAS Marxist Society hosted a discussion at SOAS to analyse and discuss the current revolutionary situation in Egypt and, more broadly, in the Middle East. Jorge Martin and Hamid Alizadeh from the International Marxist Tendency opened the meeting to a crowd of around 40 attendees. 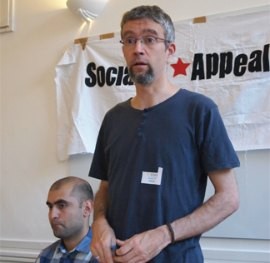 Jorge offered an extended view of the political and economic context through which demonstrations and revolutionary situations started to develop in Egypt. Stepping away from a mainstream, bourgeois interpretation of the first mass mobilisations in January 2011 as some kind of spontaneous manifestation of discontent, the perspective of the Marxists has always stressed the point that workers in Egypt had been mobilising for years before the overthrow of Mubarak. A process of political class formation and the development of class consciousness has been taking place in Egypt as a result many decades of pauperisation of working conditions, the dismantlement of social programmes, and the extreme concentration of wealth and political power in very closed circles of the ruling class. Mass unemployment, rising inequality, political repression and widespread poverty were all causes of people’s radicalisation.

Jorge explained how the period between the fall of Mubarak in February 2011 and the recent events of June 30th was far from democratic; even if elections took place, participation was extremely low and the legitimacy of candidates was disputed since the very beginning. Egyptians faced an impossible choice when compelled to vote either for a representative of Mubarak’s regime (Ahmed Shafiq) or for Mohamed Morsi, member of the Muslim Brotherhood. Therefore, Mr Morsi’s government faced a crisis of legitimacy since the beginning. Not happy with that, his rule was characterised by the a lack of fulfilment of his campaign promises. His social conservatism married economic neoliberalism, and the strong alliance between top businessmen and the Brotherhood became evident. Amidst high unpopularity, mass mobilisations asked for an end to his presidency, while large demonstrations took place in almost every city of the country.

It is precisely in this context of popular mobilisation that we should think twice before following the general line arguing that what happened in Egypt was a “coup d’état”. As Jorge explained, the army only took power because it realised that popular rule was against its interests, but not because it had any key differences with the Brotherhood. In other words, it is basically because of the mass revolutionary movement that the government fell and the military simply bandwagoned on the mobilisation to take power amidst the confusion.

Regarding the situation in the Middle East, Hamid presented an overview of the situations in Syria, Tunisia, Iran and Turkey. Outcomes have clearly been different, but there is a common analysis to be made, which is that mass movements got their strength not from previously established organisations (most unions were either illegal or co-opted), but because of conscious reassembling of people that are directly facing the material conditions of a capitalist system that is unable to provide even the slightest economic and social security or welfare. The problem, of course, is that disorganisation and the lack of a true revolutionary leadership have created this unstable situation, but the revolutionary momentum is still going on, as has been proved by episodes of protest in Tunisia, Turkey and Iran.

Comrade Hamid stressed that the political tradition in the Middle East is much more inclined towards the left than what mainstream analysis of political Islam wishes us to believe. Socialist and nationalist experiences in Egypt, Syria, Iran, Algeria and Libya, even if never broke completely with capitalism, are historical evidences of the progressive tradition of the region. Today’s mass mobilisation should identify themselves with this reality and frame their proposals and programmes in that direction.

The following discussion was particularly fruitful. Comrades and contacts presented extra ideas, arguments and questions that helped to complete the analysis of the situation. For instance, reactions of world medias and global leaders have been highly hypocritical, suggesting that mere elections (even in the Egyptian context) were enough to consider Morsi’s government as democratic, and that the coup d’état simply destroys any progression in the democratic life of the country. We clearly condemn the military opportunism, but we recognise the origins and motives of the popular struggle, and stress the importance of maintaining its combative dynamic. Real democracy needs workers’ councils and a revolutionary programme, and by building it, the masses will realise that the military generals do not share their same interests.

Another interesting point that was debated was the possibility of a civil war in Egypt. The risk exists inasmuch as tension is developing, but the question is who would fight against whom? The Muslim Brotherhood’s base of support is shrinking. Working class people and peasants that had voted for the Brotherhood are now turning the other way, and the class composition of demonstrations around the country is showing this. State repression would only radicalise the masses and the army knows it, and even current clashes against sympathisers of Morsi show that it is not necessarily a counter revolutionary movement, but only the result of the contradictions that are been unveiled during this process.

The health of the workers’ movement is improving and independent unions (or old ones that were “liberated” by the workers) are mushrooming. There is a new wave of confidence on collective action and, even if there is a risk of atomisation among so many organisations, there is also real potential for a coordinated workers’ movement, and the simple fact of its existence shows that the revolution in Egypt has already achieved important things.

As a concluding remark, we invite all comrades to keep an eye on the developing of this revolutionary situation and to approach Egyptian organisations in universities, for example, in order to spread the ideas of Marxism. In the media we will hear that the ruling class in Egypt will consolidate some kind of Constitutional Democracy and the revolution will be “over”. We should be aware that, in any case, it will be the result of opaque negotiations among the elite that will keep workers interests at bay. A stronger mobilisation can only be accompanied by a stronger organisation and a clear revolutionary leadership.

For further analysis on the Arab Revolution, purchase a copy of the IMT's book "Revolution Until Victory", with articles by Jorge Martin and Alan Woods.