European Union
Share
Tweet
On April 5 while the EU finance ministers and bankers were meeting in Brdo pri Kranju (Slovenia) 35,000 workers from all over Europe marched through Ljubljana demanding higher wages as inflation eats into their living standards. A delegation of the IMT from Austria, Italy and Switzerland was present.

While EU finance ministers met in Slovenia last Saturday to discuss the next round of attacks against the living standards of the working class, trade unions from all over Europe took to the streets of Ljubljana to demand higher wages. Under the mounting pressure of ordinary workers struggling to make a living, trade union leaders have been forced to publicly call into question the year-long "consensus" over wage restraint. 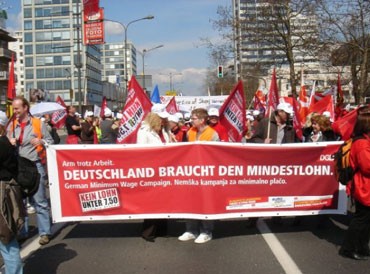 The European Trade Union Confederation (ETUC) had called the demonstration in Ljubljana, as Slovenia currently holds the EU presidency, as a way of sending a message to EU finance ministers and chairmen of the central banks who were gathering for a summit in nearby Brdo pri Kranju, Tito's old holiday residence. That message was "Enough is enough!" The speeches of the trade union leaders clearly reflected a deeper feeling of discontent among their rank and file, as consumer prices are soaring while wages are falling behind.

According to the ETUC, around 35,000 turned out, while the police tried to play it down, claiming only around 10,000 turned. Although participation was certainly higher than the police figures (as is always the case), it could have been much higher if there had been a real effort on the part of the European trade unions to mobilise in the factories and workplaces.

A large part of the delegations that travelled to Slovenia were made up of trade union officials. According to a Slovenian comrade who had participated in the recent demonstrations against the attacks of the right-wing government, the turnout of Slovenian workers was also disappointing. Most ordinary workers did not even know about the demonstration at all. This was not only due to the predictable media blackout on the issue, but, unfortunately, also because the Slovenian trade unions had not made any real effort to advertise and mobilise for the demo. 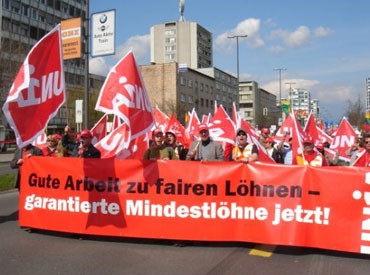 Around 10,000 of those present were Slovenian workers and they were the most militant section of the demo. IMT leaflets, which had been produced in various European languages including Slovenian, met with great interest. Many workers were prepared to give donations for the printing costs of the leaflets.

An indication of how big the vacuum on the left has become, no left parties were visible on the demonstration - apart from a 35-strong delegation from Italy's Rifondazione Comunista, of which the comrades of the Marxist tendency FalceMartello made up a significant part. Political leaflets, a customary sight on demonstrations, were conspicuously absent in Ljubljana.

From the platform, trade union leaders denounced the evils of falling real wages, but failed to put forward any concrete demands around which the international labour movement could unify and redefine its goals. Many a trade unionist and worker who went back home after the demonstration must have asked himself or herself, what the next step would be. Trapped as the various trade union leaderships are in their essentially nationalist outlook that wage increases reduce the "international competitiveness" of one's "own" country, they stop short of the idea of a truly international campaign for the defence of wages.

Instead, they hope that demonstrations such as the one in Ljubljana in itself can make the European leaders "reconsider" their position. As a trade union official put it when speaking to the Austrian delegation on the way back home: "Many a decision at the EU summit might have looked different if we had not come to Slovenia."

While it was of course necessary to show publicly one's opposition to EU policies, demonstrations like this can help to draw more people into the struggle. It can help raise the level of consciousness that the working class movement is indeed international. However, what is needed is a concrete campaign for the defence of living standards. And this would be much easier to carry through if it were done on an international scale. We know how easy it is for the ruling classes to play off the working class of one country against the workers of another.

For a sliding scale of wages!

IMT supporters distributed leaflets calling for the slogan of the sliding scale of wages to be put forward by the international trade union movement. This means that wages are automatically adjusted for the rate of inflation. In times of galloping inflation, this is the only serious demand which sums up the interests of ordinary working people. Trade union leaders have limited themselves to raising vague demands of "wage increases" while stopping short of any concrete proposals. Unfortunately this is no accident, as the reformists quietly accept the bourgeois argument that wage indexation would push employers to raise prices even more, setting off an inflationary spiral.

We must answer to these objections: If capitalism is incapable of guaranteeing the most basic standard of living to the workers, then it is time to think about an alternative. We certainly cannot accept any further deterioration of our situation. If we do this because we are afraid of undermining the profitability of capitalism, we are doomed to sink with it. The trade union movement would then just become a mechanism to make the workers accept the interests of the bourgeoisie. 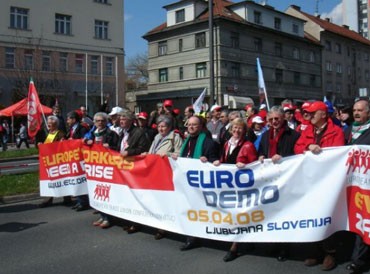 However, there has been a shift in the tone of trade union leaders over the past few years which was also evident on the demonstration in Slovenia. More radicalised speeches will draw increasing numbers of workers into activity. One trade union after another, no matter how much they may be dominated by the right-wing, as it used to be in the past, will be forced onto the path of struggle sooner or later.

The problem cannot be solved by trade unionism alone, however. The capitalists are not prepared to willingly concede a greater share to the workers. This will lead to an increasing political polarisation between the classes. The workers will increasingly look for a political alternative. The failure of the leaders of the mass organisations to offer this alternative is the most important feature of the present situation. All over Europe, no significant political force is putting forward a programme against inflation. With the situation of the workers becoming increasingly difficult, however, this force is bound to emerge. And it cannot but be a revolutionary force. Join the IMT in building a left opposition within the labour movement in all countries!

The overall delegation of comrades of the IMT was made up of around 20, from Italy, Austria and Switzerland. From Italy we took a stall and political material, including the multi-lingual IMT leaflet of which we distributed many copies. What struck us was the lack of any other political material being distributed! 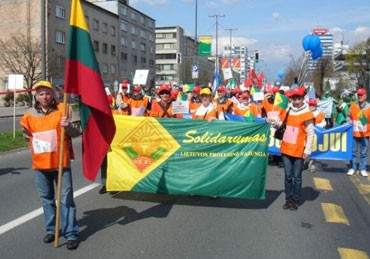 As the Austrian comrades noted, most delegations had a large proportion of trade union officials. There were two exceptions, the large Slovenian turn-out and the Polish Solidarnosc delegation. The Slovenian workers gave us a very warm welcome, eagerly snapping up our leaflets. On our delegation we had Slovenian speaking comrades who helped enormously.

The Solidarnosc delegation was of a completely different nature. Some of them even threatened our comrades manning the stall simply because they saw the name of Lenin on one of the books being sold. They also insulted the Trieste PRC delegation demanding that they remove their red flags with the hammer and sickle. It is no wonder that in Poland the old official trade union, the OPZZ has emerged as the preferred organisation of many Polish workers!

Again, in line with what the Austrian comrades have reported, there were hardly any representatives of left parties. Even the Italian PRC delegation from Trieste was rather small, with around 30, of which 10 were supporters of FalceMartello, the Marxist Tendency in Italy.

It seems that the CGIL also did not mobilise its forces, apart from its Pensioner's Union which had a sizeable turnout. On a humorous note, it was funny to see these older Italian workers taking leaflets calling for a sliding scale. They jokingly said that they had "struggled" to abolish it, referring to the fact that in Italy workers did indeed have a sliding scale and it was taken away from them!