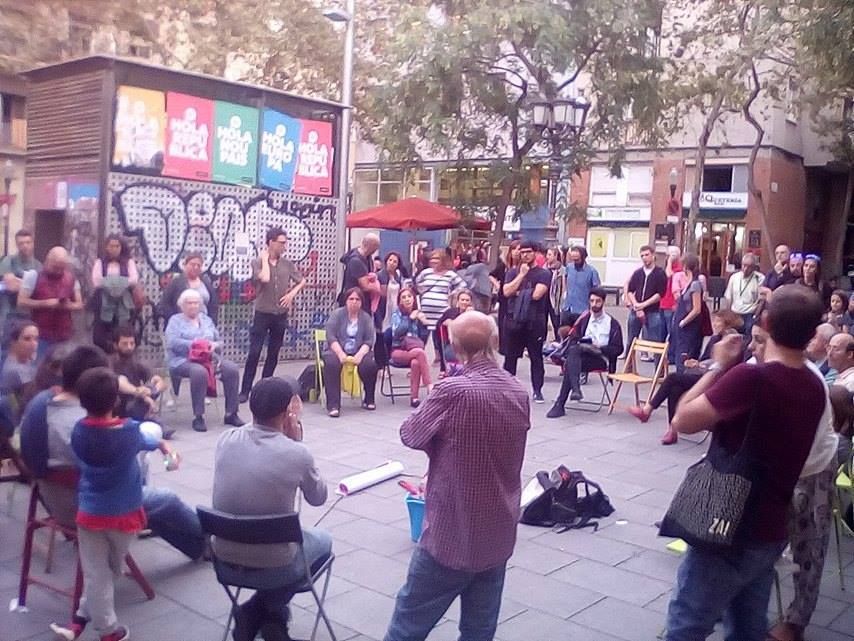 The situation in Catalonia keeps accelerating. This morning [yesterday, Thursday, September 21st], students and staff at the universities walked out and staged a rally attended by 5,000, and at many schools classes have been cancelled. University staff and student unions have declared for an indefinite general strike.

At noon, tens of thousands gathered at the seat of the Supreme Court in Barcelona to demand the release of those arrested yesterday. Many students were there, and also groups of workers, like the firefighters, who came in their uniforms, and who had staged a protest in the morning at their station. Other rallies took place in the afternoon and in other Catalan towns and cities.

The calls for a general strike are gaining traction, and important unions like the CGT or the CSC, and IAC, which are influential in important sectors, have declared in favour of a strike (although the big federations UGT and CCOO have not). The dockworkers are boycotting the police ships.

In the evening, I attended a neighbourhood defence committee at Poble Sec. Around eighty people showed up. The discussion was very interesting. It went from the need to form pickets and organise "caceroladas" (pots and pans protests) to combat repression, large groups to go and put up posters (a dangerous activity these days), to create information networks to ensure a rapid mass response to repression, to map all polling centres in the area for the referendum and to prepare pickets to defend them, to reach out to other neighbourhoods, to create a fighting fund, etc.

A woman summed up the whole thing: October 1 (the date of the referendum) starts today. Interestingly, the composition was mostly working class and there were no Catalan flags present, only banners for independence and for the republic, and the whole discussion revolved around fighting repression and making sure the referendum goes ahead.

At night there was a protest across the city banging pots and pans and honking with cars. It was truly impressive (I attach a video taken from my place – my phone is terrible and doesn't do credit to the event, but it was impressive).

After Wednesday’s events, the rhetoric of the Spanish government and its allies has changed. Now they are willing to offer concessions if the Catalan government calls off the referendum. They literally state that now only Catalan president Puigdemont can solve the problem, while browbeating the Catalan government for bringing out "their followers" onto their streets.

The truth is that the acts of repression on Wednesday have got the ball rolling; they have sparked a mass movement that has overwhelmed both the central state and the Catalan government. One does not simply crack down on fifty thousand protesters: the police had to beat a retreat from the CUP headquarters when they tried to raid them, and abandoned the besieged Civil Guards to their own fate in the Conselleria building.

Now they are desperately clutching at Puigdemont to try to save the day, but he is no longer fully in control of the situation, the masses have taken the lead: a mass that is determined to vote on October 1 and declare the republic on October 2. Repression has only given the referendum a more democratic and less nationalistic allure and expanded its base of support. In fact, the arrests on Wednesday targeted second-rate figures. According to "legality", the state should have arrested president Puigdemont and vice-president Junqueras and their cabinet, but they are aware that this would provoke an all-out insurrection. The state is facing a dilemma. It may try to use repression again, but this would only enrage the masses further. But, then again, showing weakness only emboldens the masses further.