Sinn Féin made a big surge in the Euro and Council elections. What are the reasons behind this development? What programme does Sinn Féin propose? And what does the growth of SF mean for workers across the Island? 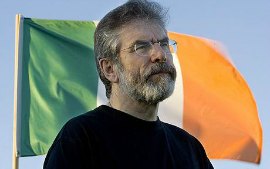 The European and Council elections saw those parties in Ireland that have become associated with the austerity being hammered in the polls. Both Fine Gael and Fianna Fáil, the Tweedle Dum and Tweedle Dee of bourgeois politics in Ireland and the right wing leadership of the Labour Party have earned the opprobrium of Irish workers over the last years. This is hardly a surprise given the depth and length of the austerity programme since 2008.

But whereas in France and Britain where the right wing Front National and UKIP made big gains or Greece, Spain and Portugal where the left made significant progress, in Ireland it was Sinn Féin who made the breakthrough winning three seats in the South and topping the poll in the North.

To secure greater investment from the European Investment Bank to create jobs in Ireland north and south.

Against a background of mass unemployment, emigration and economic crisis, austerity and attacks on the public sector this is a very mild and timid programme.

How much investment would the European Investment Bank have to pump into the Irish Economy to overcome the impact of bailing out the banks? What sort of strings would be attached? The truth is that against the background of the most serious economic crisis in the history of world capitalism this is too little; far too little to make any fundamental difference.

In truth, the crisis in the eurozone and the experience of the bailouts, and not just the Irish bailout, has been that increasingly the Troika and Germany have come to dominate the Commission and the Council of Ministers. The idea Ireland can both participate in the euro  and choose what it takes part in within the EU is utopian, the state has already ceded monetary policy sovereignty to the ECB and the bailout demonstrated the extent to which the Irish state is dependent on the EU apparatus and how it dances to the tune set by the Troika. As Connolly explained in relation to British Imperialism :

“If you remove the English army to-morrow and hoist the green flag over Dublin Castle, unless you set about the organisation of the Socialist Republic your efforts would be in vain.

England would still rule you. She would rule you through her capitalists, through her landlords, through her financiers, through the whole array of commercial and individualist institutions she has planted in this country and watered with the tears of our mothers and the blood of our martyrs.

England would still rule you to your ruin, even while your lips offered hypocritical homage at the shrine of that Freedom whose cause you had betrayed.”

If you substitute the Troika for the English Army and British and US capitalism for England’s capitalists then you more or less have the current situation summed up.

The section of Connolly’s article which immediately precedes these lines is far less frequently reprinted but very much worth quoting also:

“The Socialist who would destroy, root and branch, the whole brutally materialistic system of civilisation, which like the English language we have adopted as our own, is, I hold, a far more deadly foe to English rule and tutelage, than the superficial thinker who imagines it possible to reconcile Irish freedom with those insidious but disastrous forms of economic subjection – landlord tyranny, capitalist fraud and unclean usury; baneful fruits of the Norman Conquest, the unholy trinity, of which Strongbow and Diarmuid MacMurchadha – Norman thief and Irish traitor – were the fitting precursors and apostles.”

In the context of today’s Ireland the unholy trinity has been reborn as the Troika. The superficial thinking of 1897 is as evident today in Sinn Féin’s manifesto.

For example:  A new deal on legacy debt would make a marginal difference, but the driving factor in the Irish Economy is the development of world trade, and particularly trade within the eurozone which is still depressed. Combined with this in the past has been the level of inward capitalist investment into the state. These were major factors in the Celtic Tiger years which have turned into their opposite during the crisis. How many thousands of euro have been drained out of the pockets of Irish families since 2008? The impact of a new deal on legacy debt would be felt in the coffers of Department of Finance as a ripple on a balance sheet. While the unemployed live in misery and families struggle to pay the bills and feed their children.

In respect of the defence of workers living standards and conditions, even the more detailed list of policies is very vague. Although very worthy, it represents merely a series of minor reforms that will offer very little for working people; if that is, they were to become part of European Law. The best guarantee of worker’s wages and conditions is good trade union organisation linked to a fighting socialist programme.

The remainder of the main planks of Sinn Féin’s programme is reasserting Irish neutrality and a Border poll.

Sinn Féin’s programme is to all intents a vaguely left nationalist programme. Yet the Party has made a significant breakthrough. There is little evidence that voters flocked to the Party on the basis of huge enthusiasm for the policies.

So why did the “surge” for Sinn Féin develop as it has? Gerry Adams is well known of course and the Party has a long tradition. Sinn Féin have also supplanted the SDLP as the main opposition to the DUP in the North.  But perhaps the major factor in the South is that SF have not been blamed for the austerity, unlike every other main party.

There is a certain advantage in being well known but untested, until of course the test begins. SF’s dominant position in the North is of course a significant factor. But the economic and political situation in the South is very different. One factor is that the political crisis in the North is most clearly characterised by the crisis within Unionism and the Westminster austerity. The position is different south of the border.

There is a big political vacuum in the South, as a result of the economic crisis which has undermined FF and the Greens and now FG and Labour. In the case of the Labour, the role of Gilmore and the Labour Leaders who have tied themselves hand and foot to the coat tails of Fine Gael has been significant in growth of SF. SF have even called on trade unionists to abandon Labour, which is an indication of how bad the Labour situation appears.

Far from standing for an independent working class response to the crisis, they have sided with the ruling class. In the period prior to the last General Election there was a big swing to Labour representing workers looking for a way out of the crisis. Gilmore’s coalition with Fine Gael resulted in a collapse in the Labour vote which stands at 4% in the latest Polls. Labours collapse reflects a sense that Labour leaders have betrayed working people.

In that sense Labour are in a similar position to PASOK in Greece, who are in coalition with the capitalist New Democracy Party. Yet, unlike Greece, where the left Parties SYRIZA and the KKE grew in the last elections, with SYRIZA taking the biggest share of the vote, the left in Ireland blew the potential opportunity of developing a significant force to the left of Labour. The United Left Alliance fell apart due to left sectarian squabbling and rivalry between the Socialist Party and the SWP. The latest result of this squabbling has been the loss of the Socialist Party’s MEP.

While the left independents, PbPA and the SP won a handful of council seats. There was no “surge” on the left, which left SF as the only game in town. It is likely that the machinations of SF in the local councils and the failure of the Party to deliver any alternative to the austerity in the North or in Europe will slowly erode their support.

The alternative of Marxism

There is however another alternative, only Marxism has been able to explain the current crisis in all its stages, but most importantly we predicted it in advance. While the idea of a socialist transformation of society in Ireland may be seem far off, it is evident that capitalism has no answers. The closer SF or any party which fails to challenge capitalism gets to power, the more the contradictions of capitalism will undermine it.

But ultimately the only solution to the crisis in Ireland and indeed internationally is a genuine socialist alternative to capitalism, a 32 County Socialist United Ireland. The Workers Republic James Connolly’s programme.