On 27 November, protests broke out against amendments to the Referendum Law – eliminating the need for a 50 percent turnout of adult citizens to ensure the validity of the referendum – as well as against the Expropriation Law – making it easier for the state to expropriate the private property of ordinary working class people. All this is being declared as “in the public interest” – by which, of course, are meant the interests of big business.

Most citizens fear that these changes in the law are closely related to the announced arrival of the multinational company, Rio Tinto, which has intentions of mining lithium in western Serbia. This company is notorious throughout the world for the natural destruction it has caused wherever its operations are carried out. Since the announcement of the company’s arrival, there have been local mobilisations in western Serbia and beyond, but the adoption of these amendments to the law, which went ahead without public debate, triggered mass mobilisations on the streets on Saturday 27 November.

In several cities, these protests took the form of roadblocks, the blockade receiving the most media attention being that in Šabac. At one point, the police stepped aside, shortly after which an excavator appeared and tried to break through the protesters’ blockade, in complete disregard for their safety. The excavator was halted in a physical confrontation between the protesters, and the driver and his masked guard, who turned out to be a member of the ruling Serbian Progressive Party (SNS). Several thugs who were in the cars behind the excavator then joined the fracas, attacking protesters with sticks and hammers. This was a great moral victory for the protesters, however. For once, the SNS thugs did not get away with their violence without a serious response.

The SNS made efforts to spin the event as the violence of several demonstrators against innocent bystanders who just wanted to pass through to join celebrations of the anniversary of the party’s foundation that same day. The party gave their full backing to its excavator operators and held a rally demanding “justice” for them – although they had received real justice in the form of the punches that they had been served when they attempted to smash through the blockade.

The incident caused widespread disgust among the wider Serbian public. People who would generally speak out against violence, this time welcomed physical opposition to the SNS scum. Due to the arrogance of the regime, a much larger number of people in a far larger number of cities came out in protest on 4 December. The masses showed a growing willingness to respond to the potential provocations by Vučić’s bandits. In Novi Sad, after their initial provocations, around twenty of Vučić’s thugs took to their heels when approximately a hundred protesters chased them off.

As well as this example of the militancy of the masses, there has been a slight sharpening of the rhetoric regarding the arrival of Rio Tinto, which is increasingly seen as an onslaught by big business. Whilst this is a positive turn, it is essentially still only the first step, which does not, as yet, place the capitalist system itself at the centre of the question. 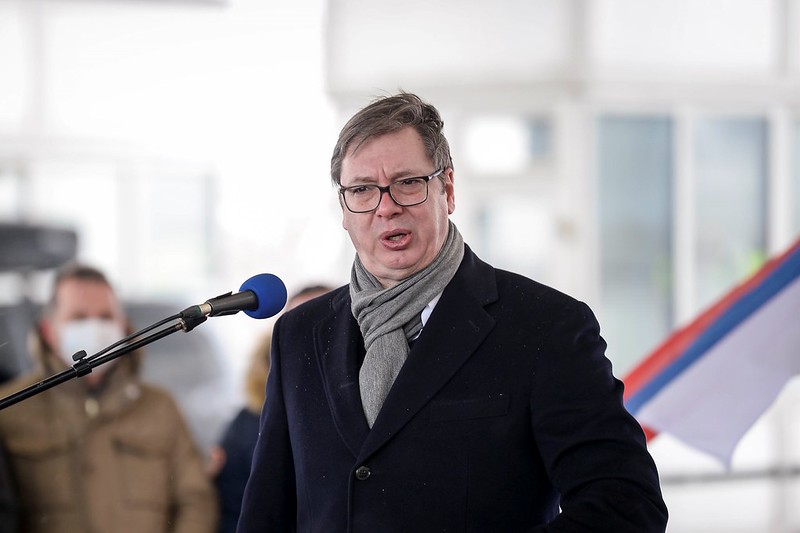 Faced with the power of the masses in the streets, Vučić has now pulled back on his planned amendments to the expropriation and referendum laws / Image: public domain

Faced with the power of the masses in the streets, Vučić has now pulled back on his planned amendments to the expropriation and referendum laws and has admitted defeat. Activists understand this as a victory, but it is not yet a complete one. It is a victory on Vučić’s own terms. The regime is trying to beat a tactical retreat to ensure Vučić’s popularity isn’t too severely dented in advance of scheduled elections in April. The Bonapartist policies of Aleksandar Vučić, who has carefully cultivated his image as that of a strict but just ruler, are based on acting as a ‘strongman’ who rises above the institutions, government and even his own party. With such a maneuver he is trying to consolidate a position of ‘supreme arbiter’ who “understands the people” and who is ready to apply disciplinary measures from up on high against the state apparatus itself in the name of “the public good”.

It is important to take note of how he has granted these concessions. In the midst of the blockades, he visited the Jadar River region, an area that is particularly threatened by the potential arrival of Rio Tinto. Large numbers of farmers from the region had joined the movement against the company. The SNS machinery then organised a meeting between the local farmers and Vučić. Widely followed through the media, Vučić secured his escape route. He tried to represent his decision to retreat as the actions of a merciful leader who has heard the appeals of locals. That is, he wants the public to believe he has changed course because he has “heard the voice of the people”, rather than having been forced by the pressure of the mass protests in the streets. Days later, in an admission of defeat, he was forced to hypocritically admit the legitimacy of these protests, saying that there are many sincere people in support of the protests, and that he was even personally concerned that some celebrities had even shown their support.

After this partial victory, the struggle will continue in various forms, with the main demand being the cancellation of all government contracts with Rio Tinto. And indeed, the regime will continue to try and find new ways to bring the company into Serbia.

The announced arrival of Rio Tinto and Vučić’s servitude to imperialism, to whom he sells not only our natural wealth but also our labour force, are a consequence of a system that is based solely on profit. These protests show that the part of the masses are loosing their fear. However, as long as the system remains intact, with or without Vučić, capitalists like those behind Rio Tinto will keep exploiting the working class and the natural resources of the country, one way or another. The best step for escalating these protests would be to connect with the workers’ movement, as the workers are the ones who can strike at the foundations of this profiteering system by means of the general strike – this would most effectively threaten Vučić’s rule, whilst preventing new attacks from big business.

Rio Tinto out of Serbia!