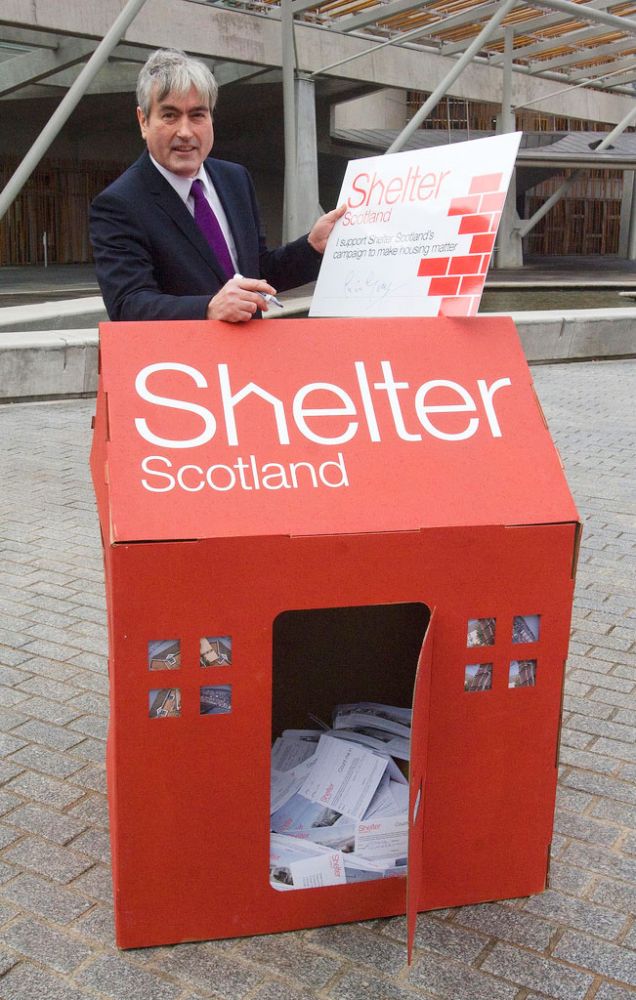 On Thursday history was made as the Scottish National Party, who only a decade ago seemed destined to play second fiddle to the Labour Party in Scottish politics, became the first party in the Scottish Parliament's twelve year history to form a single party majority. More importantly, for the first time there is a pro-independence majority in the Parliament, and consequently a referendum on whether Scotland should leave the United Kingdom will be held within the next five year term.

The Labour Party's performance in terms of seats was very bad, in what the Party tops have long considered their safest stomping ground. Labour lost seven seats overall; more importantly it lost twenty constituencies, the figure being topped up by seats on the regional lists, which are designed to even out constituency gains and make the result more proportional. One after the other previously safe Labour seats in West and Central Scotland fell to grinning Nationalists. Needless to say the Scottish Labour leader, Iain Gray, had announced his resignation by the next day.

Why the Nationalists won

So does this mark an increasingly nationalist feeling amongst Scots, are they champing at the bit to get out of the Union? In short: no. Opinion polls consistently put support for independence at around 25-30% and there has been no major upswing to accompany the SNP's sweep to power. There is one single reason why the Nationalists won on May 5. They ran a campaign that was, both on paper and in style, to the left of Labour. However, Salmond is in no way an undercover socialist (he was an economist at RBS once), and there were clear signs of pro-big business political alignment in the SNP programme. Salmond was unashamed in promising a five year public sector pay-freeze, which is a cut, possibly a big one, in real terms with inflation as high as it is. The day after his victory he was demanding corporation tax powers for Edinburgh in order to “keep Scotland's economy competitive”, which can only be read as a cut in tax for big business.

However, on the campaign trail it was a few key centre-left policies he was pushing: maintenance of free-prescriptions, no introduction of student contributions in higher education and investment in infrastructure to create jobs. The main concern of working class people in Scotland is the cuts. Scotland is very reliant on the public sector and, due to a deal Salmond struck with Cameron, the cuts have not yet fully hit the economy. Scottish workers sense a return to the dark days of Thatcher and voted for the party that talked most about investment and jobs. Labour did match some of the key SNP pledges, but only after the SNP had made them. They were playing catch-up the whole campaign. The Labour leadership completely misjudged the mood and tried to fight the SNP by standing to their right on law and order (promising an automatic six month jail sentence for those carrying knives) and by trying to whip up fears over independence. Most Scottish people know that you can vote for the SNP and then vote down separation at a subsequent referendum but there is only one chance to vote in a Scottish Government that might protect you from the worst of the cuts. They chose the Nationalists.

The failure of “centre-ground” politics 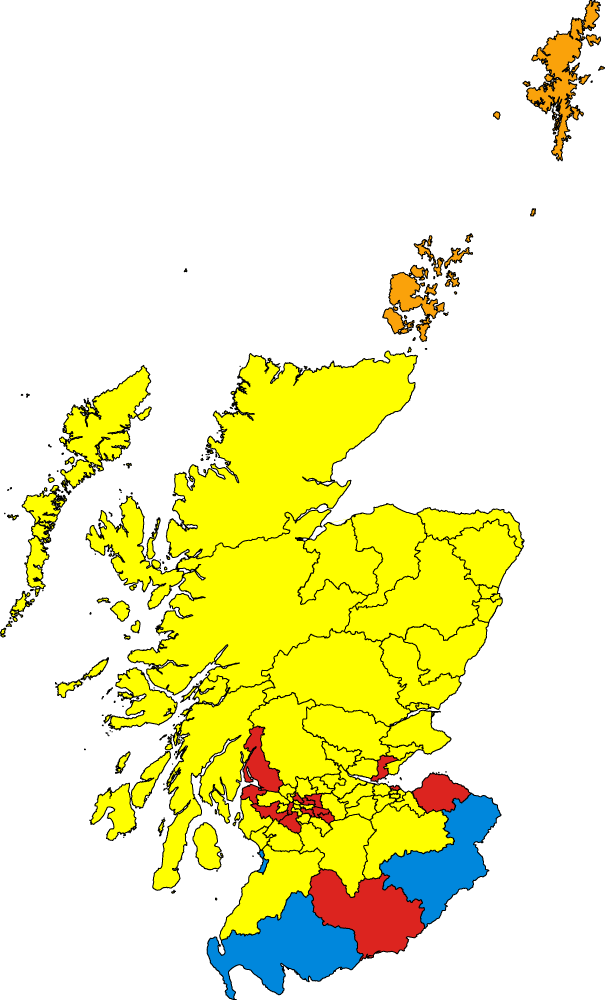 Results of elections on 5 May. SNP in yellow, Labour in red, Conservatives in blue and LibDem in orange. The result is a warning to those in the Labour Party who continue to claim that electoral success depends on “capturing the centre-ground”. In Scotland, during the most vicious Tory Government in generations, a Labour victory should have been guaranteed. Indeed, it looked like a Labour victory was a dead cert: opinion polls earlier this January put Labour on 49% of the constituency poll and 47% of the regional list. Yet Labour could only manage 31.7% and 26.3% at the ballot box last week, behind the nationalists on 45.4% in the constituency vote and 44% on the regional list. This reflected Labour’s woeful campaign where they stood more to “the centre” than the SNP and consequently lost resoundingly. If Labour had stood on a programme based on setting a budget refusing to implement cuts from Westminster by implementing a defiance budget they could have won a landslide victory. Instead Labour slumped to their lowest levels since the first devolved parliament elections in 1999.

The fact is that the current Labour leadership were not willing to implement such a programme. Iain Gray would have pushed through the cuts of Cameron and Clegg for them, as will Alex Salmond. The Nationalists will have no alternative but to make cuts because the Scottish Government block grant has been cut in line with other British departments. Salmond has talked about building houses, infrastructure projects, investment in renewable energy sources etc., but he still hasn't told us how he's going to pay for them. He will be forced by necessity to make huge cuts, despite his promises during the election.

The SNP victory throws Britain's constitutional future wide open. It was only in the last week of the campaign that an independence referendum was mentioned by the SNP and this was only to assure everyone that no bill would be brought forward until the second half of their term in office. Salmond's strategy has been to talk about independence as little as possible, and bide his time until further into the Tory-Lib Dem Westminster government, when there might be more of an appetite for independence. But despite his best efforts, the national question has reared its head, if only because of the SNP landslide. The Westminster government has said that it will not stand in the way of a referendum, and will allow the Scottish Government to set the question, probably knowing that any interference on their part would probably serve to make the idea of separation more popular.

As socialists we cannot lose sight of the real issues at stake regarding the national question. Nationalism is a blind alley, particularly under the current conditions of crisis. The SNP have made it clear that they are willing to force Scotland into a race to the bottom through lowering corporation tax and before the crash in 2008 cited Scotland as potentially ranking alongside Ireland and Iceland in the so-called “Nordic arc of prosperity.” The Labour Party leadership has responded to the SNP with a defensive call not to break up the union, but this is not a meaningful alternative to workers and youth facing cuts to their living standards.

Autonomy and the Labour Movement

We support full economic powers for a Scottish parliament, not out of a romantic nationalist sentimentality but because these powers could be used by Labour to propose and implement socialist policies, around which it could mobilise the labour movement in both Scotland and Britain as a whole against the Tory government.

In an age when big business is international, fighting struggles on national lines is limited. A Scottish Parliament, with full tax and spending powers, following a socialist economic policy would be a model to mobilise the whole British labour movement. There can be no socialist solution to this crisis in Scotland alone, as the big banks and corporations are based in London. We need to fight alongside our sisters and brothers south of the border, with an end goal of nationalising the City of London for the benefit of all the peoples of these islands.

For a Socialist Programme in Scotland

The Nationalists victory has made independence the issue of the day, and it should be answered as soon as possible. Whilst we are opposed to independence, we have always argued for an immediate referendum, as we believe the people of Scotland have the right to choose their constitutional future. A two question referendum must be called within the next year, the first question asking for full fiscal autonomy for the Scottish Parliament and the second on independence. If Labour was willing to campaign on these demands, and demonstrate how it would use extended financial powers to challenge Tory austerity, it could regain the trust it has lost through years of right-wing policies at Westminster and Holyrood. A socialist Scotland as a fighting example within the UK would be a serious challenge not just to the Tories, but to the whole capitalist system.