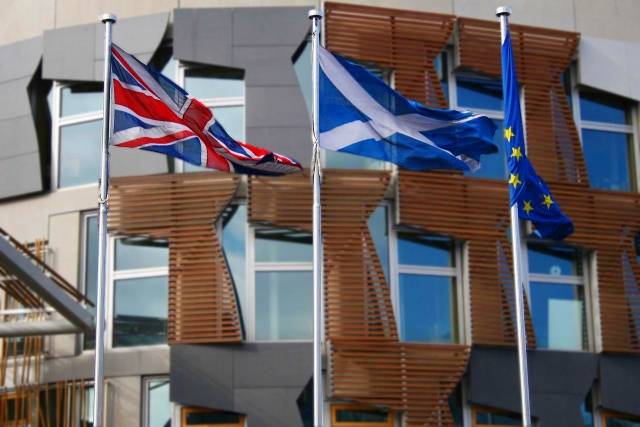 With less than seven months before Scotland goes to the polls over its future, the “No” campaign to keep together the 300-year old Union with England has once again been put on the back foot due to the clumsy intervention of the English Tory Prime Minister, David Cameron.

Cameron’s argument for the Union was a typical appeal to British nationalism and the Union Jack, sprinkled with references to his Scottish upper-class ancestry. It was made from the Olympic site in London and dubbed by opponents as a “Sermon from Mount Olympus”.

Cameron has been under pressure to intervene in the independence debate to shore up the lackluster performance of Alastair Darling, the former Labour Chancellor of the Exchequer and nominal head of the comatose “Better Together” campaign. This is clearly a dubious strategy as the intervention of a southern-based, English Conservative Prime Minister is in danger of just antagonizing Scottish people, so hated is the image of British Conservatism north of the border.

Even Cameron recognizes his limited appeal in Scotland, along with the Conservative Party. “I humbly accept that while I am sure there are many people in Scotland who would like to hear me talk about this issue, my appeal doesn’t stretch to every single part”, joked Cameron in the Commons. His red, white and blue Union Jack patriotism is synonymous with jingoism, and has no appeal to the vast majority of Scots, and is reflected in the fact the Tories have only one MP in the whole of Scotland. Figures from Ipsos Mori show the depth of feeling towards Cameron in the UK as a whole, where he has a net approval rating of minus 18, and in Scotland, where it is minus 30.

As a result, Cameron has become the Nationalists’ greatest recruitment sergeant. For this reason, the SNP leader Alex Salmond has urged the British Prime Minister to engage him in a television debate, which Cameron has steadfastly refused. Salmond would love the opportunity to paint the independence issue as one between Scotland and the English Tories.

Rather than go himself, Cameron dispatched William Hague, the Foreign Secretary, to Edinburgh to argue that independence would push Scotland out of the EU. It was it bit like Colonial Commissioners lecturing the outposts of the Empire. Then came the turn of Mark Carney, Governor of the Bank of England, who was sent north of the border to explain the difficulties of monetary union. Both escapades seemed to have backfired, thus provoking Cameron’s unwelcomed intervention. Cameron also sent George Osborne, the Chancellor, to tell the Scots they could not share the Pound with the rest of the UK if Scotland choses independence. As usual Osborne’s advice was accompanied with the usual threats. Again, Cameron plans also to hold a Cabinet meeting in Scotland, which under the circumstances can appear more like a London government meeting in a colonial outpost.

The Nationalists have of course played on the anti-Tory feelings of the majority of Scots. “A Yes vote will put Scotland’s future in Scotland’s hands, and will mean we will never again have to endure Tory governments, prime ministers and policies we didn’t vote for,” stated Nicola Sturgeon, Scotland’s deputy first minister.

With support for the “Yes” Campaign on 29% last month, reflecting a gradual increase in support for independence, as against 41% against, there are jitters coming from the “No” Campaign, viewed by many as the Establishment. With one million out of four million undecided, they are right to be concerned. A protest vote against the Tories and the Establishment could possibly tip the balance in favour of independence. Hence the fretting at Westminster.

Back in 2011, the polls showed a double-digit lead for Labour over the SNP. Within a few weeks, the Nationalists would beat Labour by nearly 14 percentage points in the constituency vote for Holyrood. This shows clearly the volatile situation in Scotland as well as the utter bankruptcy of the leadership of the Labour Party in Scotland, especially under Johann Lamont. Lamont’s recent attack on the “something for nothing” culture in Scotland was typical Blairite speak for ending universal benefits, raising tuition fees, and cutting free prescriptions. In many ways, the Scottish Labour leadership is worse than the party leadership nationally. They are increasingly viewed as part of the Establishment, especially by the youth. The party’s lack of any alternative to capitalism is serving to alienate working class people and play into the hands of the Nationalists.

Not surprisingly, the somewhat dim Alastair Darling wanted Cameron to campaign in Scotland as “the Prime Minister of the United Kingdom”, failing to appreciate the little fact of peoples’ hatred towards the Tory Coalition in London. The Scots have overwhelmingly rejected the Conservative Party and rightly hate the party of Thatcher with a passion. The Liberal Democrats, after crawling into bed with the Tories, are now viewed with the same disdain. 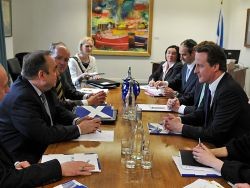 Alex Salmond and David Cameron. Photo: Prime Minister's OfficeThe issue of independence will be largely fought out between the Scottish Nationalists and the Labour Party. However the Labour leadership is making every blunder possible, which increasingly serves to alienate its traditional working class support. Of course, these people make no mention of socialism or a socialist Britain as an alternative to nationalism. They have long since abandoned any pretence about socialism and instead champion the virtues of “responsible” capitalism. In effect the Labour Party in Scotland leads the “No” campaign but on the basis of support for the British Union, i.e., the capitalist status quo. This can be viewed just as more of the same: cuts in services, continuing austerity and growing inequality. For many, the present status quo is not an option. As a result of the abject failure of the Labour leaders, many have been attracted to nationalism and the arguments about independence.

The Scottish Nationalists are cleverly attempting to play on this feeling. They have blamed England for the problems of the Scottish people. “If you want to avoid Tory austerity, then vote for independence” is their argument. If you oppose Cameron’s Bedroom Tax, then chose independence. For them, independence is the solution to everything. But this is completely false. The problems facing workers in Scotland are the same as problems faced by workers elsewhere. These are problems caused by capitalism: unemployment, low pay, austerity, poor housing, and the lack of future prospects. The crisis of capitalism means that austerity is on the agenda everywhere, including Scotland. It has nothing to do with “England” or the “Union” and everything to do with the ills of the capitalist system.

As the Marxist James Connolly, who was born in Edinburgh, explained in relation to Irish independence: “You can hoist the Green Flag over Dublin Castle, but England will still rule you through their capital.” The last 90 years has proved Connolly’s point. Independence has not solved the problems of the Irish working class, which have got much worse since 2008. The Sunday Independent of February 9th revealed that personal disposable income in Ireland fell by 17% between 2008 and 2012.

Of course, the Scottish nationalists are wedded to capitalism. They are keen to maintain the British monarchy, the pound and, of course, membership of the bosses’ European Union. They are keen to cut corporation tax and make Scotland more business-friendly, which will mean driving down wages. On the basis of capitalism, whether in Scotland or elsewhere, this will be a terrible nightmare for working class people. That is why we say that independence is no solution.

The nationalists once talked about the “arc of prosperity”, which included Ireland and Iceland. But this “arc” has become one of crisis. If we take the example of Ireland or Iceland, which was heavily dependent on the finance sector, as is Scotland, the collapse of 2008 ushered in a disaster for working class people. Ireland is struggling and Iceland is cut off from capital markets and still has capital controls in place. If Scotland had been independent in 2008, it would have been bankrupted by the collapse of the Royal Bank of Scotland, 80% of which still remains in public hands. Living standards would have collapsed.

On the basis of capitalism, independence offers no way out. Nevertheless, Scottish people clearly want more powers over their lives. The powers of the Scottish Parliament are limited and must be dramatically increased, including the powers to nationalize the economy. There must be real autonomy for Scotland.

However, the struggle to change society cannot be limited to Scotland alone. Capitalism is international and so is the struggle of the working class. As opposed to national divisions, which serve to divide and weaken the workers’ movement, we need a socialist and internationalist outlook. An independent capitalist Scotland would serve to split the British working class and its organisations, which have been built up over generations. We have one trade union and labour movement not divided on national or religious lines, as in some other countries. This is a valuable conquest that must not be thrown way.

It is true that these organisations can lag behind and even become a brake on the struggle. This means that they need to be cleansed of careerism and time-servers. Carpet-baggers must be rooted out and the organizations of the labour movement need to be transformed into fighting organisations which will challenge capitalism and fight for socialism. That remains the real task of workers and youth in Scotland, England, Wales and Ireland.

In fighting to change society, we reject the false Stalinist idea of socialism in one country, which is a reactionary utopia. Such attempts, as in the Soviet Union, led to bureaucratic rule and collapse. Those who see capitalist independence in Scotland as a stepping stone to a “socialist Scotland” have simply capitulated to nationalism. There is no such road. The struggle for socialism in Scotland must be part of the struggle for socialism throughout Britain and internationally. Movements of the working class in Glasgow will be part of workers’ movements throughout the towns and cities in the rest of the British Isles.

Rather than Scottish independence, we must fight for a socialist federation of Britain with the fullest autonomy for its peoples as part of a socialist united states of Europe. In turn, that will be a bridge to a world federation of socialist states. Only on this basis will the problems of the Scottish working class be solved, and lay the basis for the expansion of national culture, heritage and language and the harmonious integration of peoples.

Source: Scotland’s referendum: is a vote for independence the way forward?