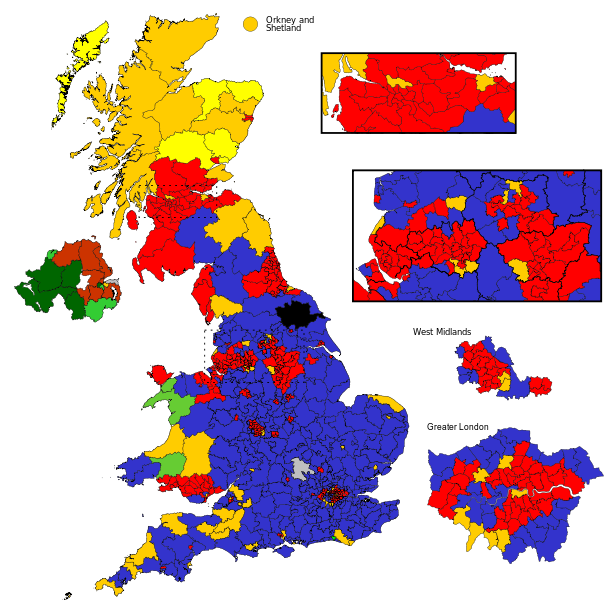 It was one of the surest things in British politics: when an election comes around, no matter the national trend, Scotland will always vote Labour. But with the SNP managing to form a minority government, winning one more seat than Labour in the 2007 Scottish Parliament election, and then their shock by-election victory in Glasgow east in 2008 it seemed, to some, that the Scottish working class was switching their allegiances. The SNP could now challenge Labour in its industrial urban heartlands. We explained then, as now, that the SNP gain only because of Labour's continuing failure to present the working people of Scotland (and the whole UK) with a Socialist programme.

But this general election was a dismal failure for the Nationalists, who, up until recently, were boasting they could win 20 seats at Westminster. The results showed Scotland bucking the national trend with Labour gaining a 2.5% increase in their share of the vote and a 0.1% swing from the SNP, as opposed to a 6.2% decrease and a 5% swing to the Tories for the whole UK. The Nationalists had to be content with a marginal increase in the share of the vote as they failed to break into central Scotland. They only succeeded in maintaining their 2005 level of 6MPs and lost to Labour in Glasgow East by almost 12000 votes.

As mush as we'd like to claim the Labour vote north of the border as a point of national pride against the Tory- voting-English, Scotland staying Red was part of a sharp polarisation throughout the country. Despite the disillusionment after thirteen years of right wing Labour government synonymous with the policies of privatisation, war and the bailing out of the banks, its traditional working class base turned out, often in higher numbers than in 2005. Labour’s majority increased in the London seats of West Ham and Hackney South and Shoreditch whilst Liverpool council was taken by Labour from the Lib Dems and Barking & Dagenham council is now 100% Labour. The North East of England, South Wales and Inner City London were all notable in continuing to vote Labour.

The election was therefore characterised by a working class vote to “Keep the Tories out”. The political polarisation underlines that class conflict is the fundamental ingredient in British politics and that the working class continues to identify its interests with the Labour Party. In Scotland this is demonstrated in the geographical distribution of Labour seats. Of 41 seats, 39 are concentrated in the central belt where Scotland’s urban centres are and where the working class is the greatest proportion of the population. These are also the areas where the labour and trade union movement has historically been strongest. Unsurprisingly the other 2 seats are also urban; Aberdeen North and South.

Not only did Labour regain Glasgow East from the SNP they also regained Dunfermline and West Fife which had also been lost in a by-election to the Liberal Democrats. The SNP’s target seats including Glasgow Central and the Liberal’s of Edinburgh East saw increased Labour majorities, with Labour attaining over 50% of the vote in the former. Notably in Labour safe seats in central Scotland Labour remained solid with increased majorities. In East Renfrewshire despite the Labour candidate being the personally unpopular Scottish Secretary Jim Murphy the party saw its majority grow by 20.4% in Scotland’s highest turnout, 77%.

The defeat of the Nationalists is also attributable to their own failures in government and the short sightedness of their own perspective. Alex Salmond’s infamous boast that Scotland could join a Nordic “arc of prosperity” made up of small nations with financial service based economies such as Ireland and Iceland doesn’t seem so clever anymore. Along with the collapse of Scotland’s biggest financial institutions, HBOS and the Royal Bank of Scotland went a big slice of the SNP’s support amongst the Scottish bourgeois. The plan was to use the SNP to gain increasing levels of financial autonomy to allow for the creation of a sort of colder Caiman Islands, a deregulated financial paradise within safe distance of the City of London. This perfectly matched Salmond’s background as a Royal Bank economist yet it was unlikely to wash so well with the electorate.

Not a problem for the Nats. The SNP became all things to all men and faced the business circles with one agenda and the people of Scotland with another. The 2007 Scottish Parliamentary election was won on a broadly soft left program which included promises such as smaller class sizes, the cancellation of all student debt and the scrapping of the hated council tax in favour of a local income tax. This allowed certain gains into traditionally Labour voting urban working class areas. Yet in government the SNP have reneged on this program and not delivered on a single on of these promises. The things that they have delivered on such as an increased police presence and grants for small businesses seem more inclined towards their traditional middle class base. The election results only confirmed that the SNP have lost their legitimacy as a viable alternative to the Tories or a right wing Labour leadership.

The Independence Question was conspicuous by its absence during the election campaign. Indeed you'd be forgiven for thinking that the SNP themselves had forgotten about it. The big Burns Night launch of a Scottish Parliamentary bill for an independence referendum was mysteriously cancelled and when the bill was announced it was at a cramped press conference that barely made first item on Scottish news. It still remains to be seen when it will eventually be discussed in the Parliament. The Scottish Labour leader correctly stated that, “If Alex Salmond believed in his bill he would bring it to the parliament but he knows it would be defeated. He is stalling for time as he doesn't know what to do.” (BBC News 25/2/10) The SNP fought this election on the basis of a campaign calling for “local champions” to represent “Scotland’s interests” at Westminster, rather than pressing the need to vote for an independent Scotland. In effect they were more concerned with attempting to spread an anti-Tory cuts image than a pro-independence one.

Nationalism is clearly now on the back foot in Scottish politics yet the divergence in the Scottish results from the national trend does potentially leave an opportunity for it to sneak back in via the back door. The Herald’s editorial the day after the election stated on the SNP result,

“Although it was not a night or breakthrough victories, the Nationalists still believe Tory success at Westminster plays to their long-term strategy of raising the ghost of Thatcher and pitching the next phase of the political narrative as one of an SNP Holyrood government fighting Cameron cuts, which polls have said would boost the prospects of a successful independence referendum.” (Herald 7/5/10, p.20and p.3)

Yet this should not be exaggerated. It’s clear this new government will struggle for legitimacy: the Tories only have 1 MP in Scotland and the Liberals 11, bringing the coalition to barely over a fifth of Scottish MPs. However, the SNP currently stand politically discredited whilst the Scottish working class rejected nationalism in favour of Labour as the best way to fight the Tories. The next period will be one of heightened class struggle as the Tory led government launches an all out offensive on workers in the public sector. Our perspective remains that this will initially be answered through the trade unions on the industrial front but that this will have to also achieve a political expression through the traditional part of the working class, the Labour Party. It would take a prolonged period of Labour failure to reopen the gateway to the SNP.

As throughout Britain the General Election also saw numerous candidates stand under various tickets as a left alternative, including Arthur Scargill’s Socialist Labour Party, the Trade Union and Socialist Coalition and the Scottish Socialist Party. All of these attempts ended in a marked defeat, not just in terms of gaining seats but in terms of making any impact whatsoever. After 13 years of right wing Labour government and in a period of rising unemployment and international capitalist crisis it would seem that there has never been a better opportunity for an attempt to build a left-of-Labour socialist alternative. Yet the political polarisation cut across these groups as workers voted for Labour to keep the Tories out and those who may have voted for them in the past realised that protest votes were a luxury that couldn’t be afforded. TUSC and the SSP both achieved 0.1% of the Scottish vote, which was only half of the BNP total. In Glasgow North East there was the ludicrous position of all three of the parties mentioned above standing against each other and achieving less than 2% of the vote between them. Even Tommy Sheridan standing on home turf in Glasgow South West couldn’t break through the 1000 vote barrier.

The SSP enjoyed success in the 2003 Scottish Parliamentary elections when it achieved 6 MSPs, yet in the period since then it has performed woefully in elections, especially since losing all its MSPs in 2007. This is not a condemnation of the character of its members or their determination to struggle on behalf of the working class and for socialism. However there must be a point when a line is drawn and a new orientation decided upon or the SSP’s members risk disappearing with it as a footnote in the history of the Scottish left. The result of the various left groups outside the Labour Party compare markedly with that of the socialist Labour MP Katy Clarke who held Ayrshire North and Aaron with a majority of almost 10000 votes and saw her share the vote rise by 3.5%.

The next big electoral test in Scotland is less than a year away with Holyrood elections scheduled for May 2011. A week is a long time in politics under any circumstances and in a period of economic crisis which is readily spilling over to political and social crisis across Europe it is hard to make steadfast predictions for a year’s time. Yet with it now clear th Labour is going to be in opposition, in Scotland and nationally we are in a new period. Labour can only permanently stave off the threat of nationalism by adopting a bold socialist program and making it clear that, in power in Scotland, they will refuse to implement Tory cuts. A fighting Labour Government in Holyrood, based on a socialist programme, is the only way to defend Scottish workers from the onslaught of a Tory government, and would be a beacon of resistance and a concrete alternative for workers in the rest of Britain and beyond.