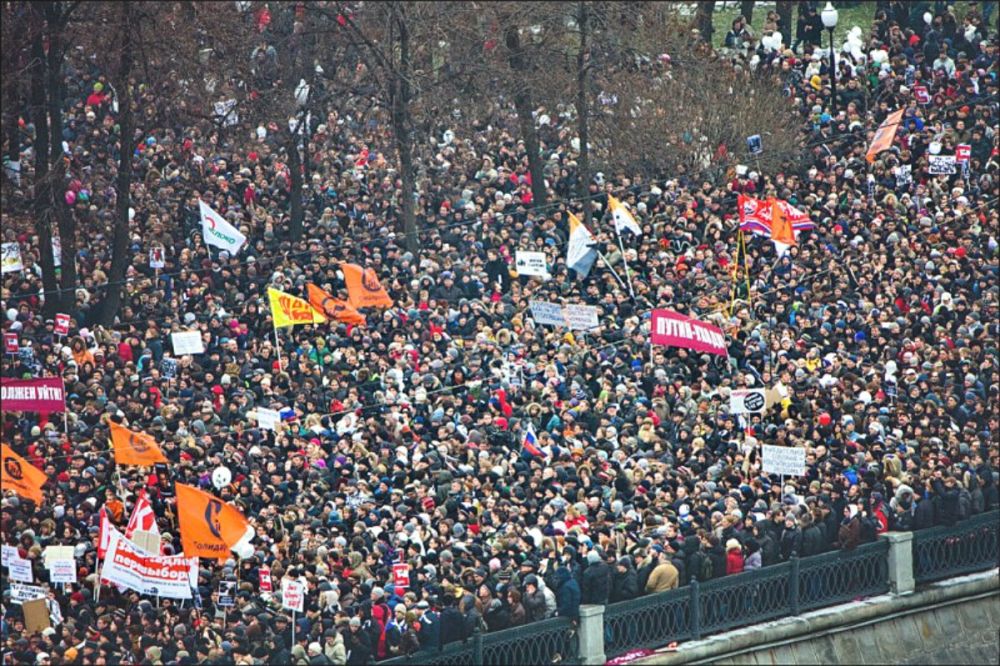 Finally the presidential elections were held; massive popular protests were re-launched; and the people once again were unhappy with the fraud. The liberals stand for fair elections and for the restoration (as if they existed!) of democratic institutions of the European type. This is right and correct. We also support the slogan for fair elections. However, we also understand the limitations of representative, bourgeois democracy.

We understand that real power in such a system belongs to the wealthy capitalists and their tame politicians as opposed to the people. Do not forget about the oligarchic nomenklatura [bureaucratic establishment] character of Russian capitalism. The two hundred top richest people in Russia possess a total of half a trillion dollars! It is clear that these people can finance election campaigns of candidates and parties, and thus influence politics far more than ordinary citizens, whether they be workers or so-called “middle class”.

However, even formal bourgeois democracy is better than the present authoritarian regime of Putin and United Russia. Therefore, we are in no way ready to identify with those who believe that Putin is not as terrible as the “Orange plague” [a reference to the so-called 'orange revolution' in Ukraine, under the imperialist influence of the USA].

Limitations of the “liberal” intelligentsia

We do not agree with the liberals, not because they are for freedom and democracy – we too are for freedom and democracy – because we believe that in this respect, the liberals are impermissibly moderate and inconsistent. Our Russian liberals often take a progressive position on such issues as abortion, women's rights, ethnic and sexual minorities. We respect them for it. Unfortunately, their notion of freedom does not go beyond what has already been achieved in Western Europe and the USA. And then many of them have criticized Western countries from a reactionary standpoint – blaming them for flirting with human rights, tolerance and political correctness (see for example, Bukovsky’s famous article «Политкорректность хуже Ленинизма» - “Political correctness is worse than Leninism").

In reality, the bourgeois governments of Europe and America merely cover up their reluctance to tackle the real problems of exploitation and discrimination with rhetoric. Only a drastic change and only the progress of society towards socialism can lead to the true freedom of every member of society. Possibly our non-nationalist right can define themselves as liberals with certain exaggeration, although they are hardly “democrats”.

It is no secret, however, that our liberal intelligentsia is afraid of the common people. We can recall countless articles and blog posts on the contrast between the so-called “average progressive creative class” and the masses, the “cattle” as they describe them. The latter they associate with innumerable vices, from aggressiveness to their supposed everlasting obedience to authority. It is not at all clear therefore how the liberals are going to transfer power to the people with such views on their character?

There are, however, those who raise the idea of property qualifications. Unforgettable are Yulia Latynina’s writings on this question. [Note: back in January 2010, after Yanukovich’s won the elections in Ukraine, she published an article, Letting Poor People Vote Is Dangerous in which she stated that the poor cannot be trusted to vote for their best interests. She wrote:

“Viktor Yanukovych’s victory in Sunday’s presidential election — not unlike the victories of former Chilean President Salvador Allende, Iranian President Mahmoud Ahmadinejad or Adolf Hitler — once again raises doubt about the basic premise of democracy: that the people are capable of choosing their own leader. Unfortunately, only wealthy people are truly capable of electing their leaders in a responsible manner. Poor people elect politicians like Yanukovych or Venezuelan President Hugo Chavez.”]

Such views are far more reactionary than even Putin's, because the prime minister at least formally recognizes general suffrage. We encourage honest liberals to be less afraid of the people, and to join the masses when they finally begin to fight for freedom, democracy and genuine socialism.

Divisive role of the nationalists

There is also another force within the modern Russian right wing – the nationalists. Oddly enough, they deserve some respect on one thing. Unlike the Liberals, the nationalist right is not afraid of people. The nationalist leaders are ready to fight for the extension of bourgeois democracy, hoping thus to win a warm place for themselves in the Duma and the government. The discipline of the nationalists – with their orderly lines on rallies and demos behind their banners, shouting slogans etc. – is impressive. There are many honest workers within the ranks of the nationalist right, who are merely expressing dissatisfaction with the existing system.

The nationalists go much further in their criticism than the Liberals. They don't want simply a replacement of the people at the top, but a real change of order. This is especially noticeable in St. Petersburg, where the movement has divided into two wings – a radical and a pro-system one. The nationalists present themselves as the radical wing. Despite a number of interesting thinkers and writers within their camp, their far right views are quite utopian. Take the example of their main slogan – to expel the migrant workers! After all, the evil Putin does not bring in immigrants to cause as much possible harm to the Russian people as possible!

Migration to Russia from the poor countries of the Caucasus and Central Asia is a consequence of the structure of global capital. No ultra-right government can stop the migration of the “blacks” [a derogatory term used to describe the people from these regions], and in any case such a measure would only create more problems in the already difficult living conditions of that part of the working class.

It may sound old-fashioned, but the Russian workers and those who the nationalists scornfully refer to as the "churki" [“wooden stubs”, like the “blacks” above, a derogatory term for non-white foreigners] have a common enemy – global and Russian capital. The fight against the “aliens” might in the short term temporarily improve conditions of the Russian proletariat, but in the long run it would deprive it of its most important ally in the struggle against capital, causing a rift between the Russian masses and the oppressed people of the Third World.

Internationalism and common struggle against capitalism

Once capitalism is overthrown in a joint struggle on a global scale, inequality in the development of continents will be removed and the working class will eliminate forced migration determined by the fear of starvation. Regardless of their ethnicity and place of birth, everyone will be able to live wherever he likes, in Moscow, Baku, London or, even, Antananarivo. But as opposed to what we see today, it would be a voluntary choice of the people, not dictated by the threat of poverty, hunger and death from endless civil war at home. Ethnic conflicts would quickly disappear once the economic competition in the labour market has been eliminated and wide access to education and culture is guaranteed to all. Thus, the only answer to resolve the ethnic conflict is internationalism and a mass revolutionary party of the working class. In practice, this means full cooperation in a united struggle for workers rights of the various nationalities.

Our disagreements with the nationalists are of a fundamental nature. We consistently fight for the emancipation of the workers and youth under their influence, but that does not mean that we should avoid participating with them in the mass protest movement – running away from their banners on the rallies. On the contrary, we should explain the fallacy of their views to the young workers, trapped in the nationalist ideology. The best way is to show how mass movements actually unite people of different nationalities. While constantly calling for unity, we should expose the fact that the nationalists, using xenophobic propaganda, attempt to split social or union movements in which they are involved.