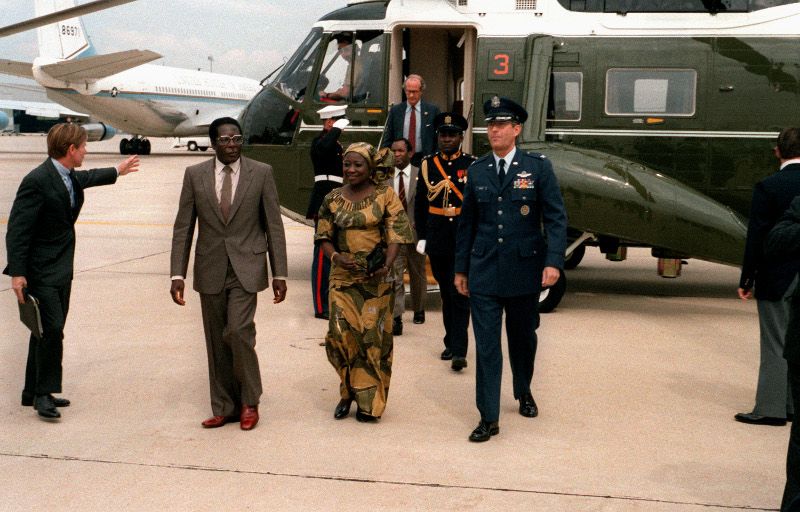 David van Wyk in South Africa sent us this comment on how Mugabe, from a leader of the war of liberation, became a pliant tool in the hands of imperialism, impoverishing the Zimbabwean masses in the process, and only later turning to “land reform” and so-called “economic indigenisation” as a means of diverting attention away from the very problems his policies had provoked in the first place.

The Zimbabwe African National Union (ZANU) is a petit bourgeois nationalist organisation that came to power in Zimbabwe in 1980, after elections following the Lancaster House Agreement that was signed with Margaret Thatcher’s Conservative Party government in Britain.

The petit bourgeois leaders of ZANU mobilised the peasantry in remote rural areas during the second Chimurenga (liberation war). The working class was effectively ignored during the struggle. After 1980, the nationalist petite bourgeoisie easily dismissed the peasantry, and avoided dealing with the land question for the first fifteen years. The petite bourgeoisie was satisfied with replacing the white settlers, stepping into their shoes and continuing to exploit and oppress both the Zimbabwean working class and the peasantry on behalf of international capital. The nationalist petite bourgeoisie, in the prophetic words of Franz Fanon, “discovered its historic mission: that of intermediary” for international capitalism.

Whereas Hitler was the hammer with which international capitalism crushed the working class in Europe, Ronald Reagan was the steamroller that global capitalism employed to destroy working class organisations globally. Robert Mugabe was a key figure in Reagan’s mission in the Southern African context. In the first instance Mugabe ruthlessly destroyed his Soviet Union supported opposition in Joshua Nkomo’s Zimbabwe African People’s Union (ZAPU), by unleashing the notorious Fifth Brigade on Matabeleland in 1984 during operation Gukurahundi. Once he destroyed any potential nationalist threat to his dominance he proceeded to destroy the left – including attacking the Zimbabwe Congress of Trade Unions (ZCTU).

At the height of these repressive actions, Mugabe was the darling of the Commonwealth, the United Nations and the World Bank and the IMF. So much so that Mugabe’s Finance Minister Bernard Chidzero chaired the IMF/World Bank Development Committee. Naturally the West and global institutions and organisations kept silent about Mugabe’s brutality then. Interestingly he favoured the Pan Africanist Congress over the African National Congress at the time, because of the latter’s historic ties with ZAPU. After all, Chris Hani was involved in the famous Wankie/Whange battle between ZAPU’s armed wing ZIPRA and the Rhodesian army in the 1960s.

In the 1980s several MK cadres found themselves at the wrong end of Mugabe’s Central Intelligence Organisation (CIO). Their historical association with Zipra, ZAPU’s liberation army, earned them spells in detention and torture, particularly in Bulawayo during 1984. Although the ANC had a branch and offices in Avondale in Harare, MK had to operate from clandestine safe houses.

Mugabe at the African Union in 2008. Photo by TSGT Jeremy Lock. Mugabe introduced one of the most stringent economic structural adjustment programmes (ESAP) under the direction of the IMF and the World Bank. This “Economic Suffering for African People” as locals jokingly called ESAP destroyed the Zimbabwe Electricity Supply Authority (ZESA), most other parastatals and Zimbabwe’s food security. Zimbabwe borrowed massively at the outset, figuring that repayments -- which required 16% of export earnings in 1983 -- would “decline sharply until we estimate it will be about 4% within the next few years”.

The first loan ironically was to completely reconstruct Zimbabwe’s power facility at Whange, the Power I loan was the first Bank energy loan to Zimbabwe after Independence in 1980. The loan was to the Electricity Supply Commission (ESC), which was later incorporated into a national power utility, the Zimbabwe Electricity Supply Authority (ZESA).

The main lender, the World Bank, concurred: “The debt service ratios should begin to decline after 1984 even with large amounts of additional external borrowing”. This was the economic equivalent of a sucker-punch, for in reality, Zimbabwe's debt servicing spiralled up to an untenable 37% of export earnings by 1987.

Loan conditions quickly emerged. By 1985, the IMF was pressuring Mugabe to cut education spending and, in 1986, food subsidies fell to two-thirds of 1981 levels.

The two global agencies advised Zimbabwe to switch from food crops to cash crops in order to pay off astronomical IMF and World Bank loans. Suddenly Zimbabwe experienced food shortages for the first time, and electricity power cuts became a daily occurrence. This happened soon after the World Bank and IMF became responsible for the micro-management of the Zimbabwe Electricity Supply Authority. One wonders if the ANC leadership in South Africa knew of this historical fiasco north of Limpopo before they entered into the recent loan with the World Bank to construct the Medupi Power Plant in Limpopo. Interestingly, then in Zimbabwe, as now in South Africa, the World Bank advised that electricity to ZESAs consumers was “far too cheap.”

The IMF and the World Bank effectively led Zimbabwe into bankruptcy and economic self destruction through the agency of the ZANU-PF petite bourgeoisie.

Ever since Mugabe’s unholy alliance with global capital the people of Zimbabwe have had to suffer the impositions of the IMF and the World Bank, including the dismantling of Zimbabwe’s nascent manufacturing sector – the collapse of David Whitehead textiles, the destruction of Supersonic, the end of Bata shoes, reversing gains in local content of Land Rover which had 75% local content in 1980 and the general collapse of the motor vehicle industry, particularly Peugot, Citroen and Ford, with tens of thousands of workers becoming unemployed in working class areas such as Willowvale and Chitungwiza. The World Bank and IMF advised that Zimbabwe should concentrate on its competitive advantage – cash crop production.

The peasantry was ‘advised’ to switch from food crop production to cash crop production – droughts in the late 1980s left even the usually resilient Zimbabwean peasantry starving. Land reform in the form of land invasions was but a system of reward for military generals, so as to minimize the risk of military coups, and ZANU-PF cronies. Most recently Mugabe punished the working class in Harare for daring to vote against him by launching Operation Murambatsvina, “driving out the trash”, by demolishing tens of thousands of houses in Harare’s working class townships.

It is against this background that workers and peasants should read Mugabe’s ‘land reform’ and his calls for economic indigenisation. Fanon noted that the nationalist petite bourgeoisie ‘constantly demands the nationalisation of the economy and of the trading sectors. This is because, from their point of view, nationalisation does not mean placing the whole economy at the service of the nation and deciding to satisfy the needs of the nation. For them nationalisation does not mean governing the state with regard to the few social relations whose growth it has been decided to encourage. To them, nationalisation quite simply means the transfer into native (petit bourgeois) hands those unfair advantages which are the legacy of the colonial period.” In other words the nationalist petite bourgeoisie models itself on colonial settlers and when in power behaves as colonial settlers would towards the working class and the peasantry.

The nationalist middle class is too weak to address the questions of the national revolution and fears that the working class will drive the revolution in an uninterrupted way (Lenin) towards a permanent revolution (Trotsky) that will take matters to the logical conclusion of socialism. The national petite bourgeoisie and the weak national bourgeoisie therefore sell their souls to global capitalism, while mouthing the most radical slogans – they don red T-Shirts in township rallies on weekends and three piece suits during office hours, during global conferences and at evening functions reassuring global capital of their loyalty while negotiating a piece of the cake for themselves.