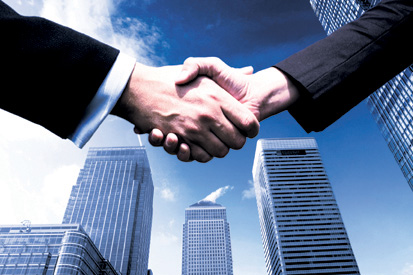 Marxists have long since been conscious of the nature of the state, its industrious defence of the capitalist class, and its prejudice against working people. But much of the public are unaware of just how incestuous the capitalists and governments really are. Will Roche continues with his second in a series of three articles on monopoly capitalism.

In my previous article ‘Monopoly Capitalism’ I tried to demonstrate that monopolisation is endemic to a capitalist economy. I showed how economies of scale lead to ever-larger companies, and to the domination of entire national economies. Big business has become wealthier and more powerful today than ever before.

Economic forces are not the only causes. Political forces are at work too. In this article, I’ll try to demonstrate how big business infiltrates and controls government, and indeed, how government has become absorbed into big business.

Marxists have long since been conscious of the nature of the state, its industrious defence of the capitalist class, and its prejudice against working people. But much of the public are unaware of just how incestuous the capitalists and governments really are.

Corporate domination of parliament is not a new phenomenon. During the late 1800s, for example, Liberal Prime Minister Gladstone’s efforts to regulate the rail industry were obstructed by 132 MPs who held directorships in railway companies. But today, it takes place on an unprecedented scale.

Big business has a big impact on policy making, not because of the strength of their ideas, but due to the amount of money they throw at government. The party of big business, the Conservatives, get the lions share of their funding from rich individuels and corporations. They recently hit the press for the enormous £5m donated by millionaire Stuart Wheeler. David Cameron has personally raised more than £5m for the general election campaign after nearly 100 business people signed up to a premier club that offers them a private dinner with the Tory leader for an annual fee of £50,000.

This money has more strings attached than the Philharmonic Orchestra! It’s often used to secure exemptions from the rules, to get permits or receive other favours. For example, Bernie Ecclestone, head of Formula One, donated £1m to New Labour before the 1997 general election. Almost immediately after a subsequent meeting between Blair and Ecclestone, the UK ban on tobacco advertising was scrapped.

If you’ve got the money, you can hire a lobbyist and get your interests represented at the heart of government – who says we live in a democracy? Most of it takes place behind closed doors, but the clumsy occasionally get caught.

But big business has gone much further than bribery and lobbying. Capitalists and MPs freely interchange between government and private firms. This process has become known as the 'revolving door'. Companies are often keen to employ former ministers as they hold inside information, or influence policy-making, which can advantage a bidding company.

There was a significant turnover of ministers in 2007. For example, Patricia Hewitt MP, former Health Secretary, became Special Consultant to Alliance Boots Ltd. Most prominent, though, have been former Prime Minister Blair’s new roles as senior adviser to JP Morgan Chase & Co. and Zurich Financial Services.

Conversely, many business people have become MPs, accessing classified information and influencing policy for their industries. For instance, Chairman of British Airways, Lord Marshall of Knightsbridge, who campaigned against tax on aviation fuel, is now in charge of Gordon Brown’s energy tax review. Paul Leinster, Director of Smithkline Beecham, which has polluted streams in Sussex and Gloucestershire, is now Head of the Environment Agency’s Environmental Protection Directorate! In 1999, Leinster proposed that companies should be allowed to monitor their own pollution, and that regulation be redesigned by industry.

Business people can even temporarily go and work in a minister's office for a couple of years. This is known as ‘seconding’, and it’s completely legal!

This has had a profound effect on industry. For instance, it is quite extraordinary the number of former MPs and ministers who are now working for the nuclear industry. All the inside pressure has resulted in remarkable about-face in government policy since 2003, when it announced it was "not going to build a new generation of nuclear power stations". In 2007, the Government said in contrast that it would be a "profound mistake" to rule out nuclear power.

The Ministry of Defence is just as bent. They recently privatised the Defence Evaluation and Research Agency, built from public money, changed the name to QinetiQ, then sold it off to the U.S. firm Carlyle, a company currently making a fortune from the ‘reconstruction’ of Iraq. And, guess who’s on the board of Carlye? George Bush, and John Major. No wonder the company is getting plum contracts!

The most notable conquest by big business has been the privatisation of public services, most notably, the NHS. Over a hundred hospitals have, or are being demolished, and lucrative contracts are being farmed out to private firms to build a small number of private hospitals, only to then be leased at great expense back to the NHS. Private firms have also taken over catering, cleaning and portering.

Big business has successfully installed its representatives into government. In 1997, the Confederation of British Industry, a lobbying organisation for big business, demanded that government’s Private Finance Panel (composed of civil servants) be scrapped and replaced with a Task Force composed of industry representatives. It got it. Adrian Montague, a merchant banker who worked on the privatisation of British Rail, and the Channel Tunnel project, was put in charge.

In a move that outraged critics, the government hired Robert Osborne head of Tarmac, one of the major builders of private financed hospitals, to run the private finance unit at the Department of Health (DH). How about that for a conflict of interest! By 2007 the DH’s Commercial Directorate had a staff of 190, of whom just eight were civil servants, the other 182 being recruited from the private sector.

In the past 18 months over 25,000 jobs have been axed from the NHS, and thousands of hospital beds lost. One in eight NHS Trusts faces closure. The corporate takeover of the NHS is well underway.

Scores of local authorities, whose task is to represent the public interest, have been swayed by private companies, who often offer inducements. In Pembury, Kent, Tesco offered to give £200,000 to the local authority’s park-and-ride scheme and pay £300,000 for a community centre if it received planning permission for a new store. Whilst supermarkets were lobbying against the introduction of a new tax on store car parks, Tesco made a £12m donation to the Millennium Dome. Tesco subsequently met with John Prescott. Two months later the tax proposal was scrapped. Much of these plans go ahead despite enormous public protest from local residents. Many consider this bribery, but government calls it ‘offsite planning gain’, and it’s completely legal!

No commercial sector is better represented in than supermarkets. Chain owner, David Sainsbury, who has donated over £5m to the Labour Party, was a minister for the Department of Trade and Industry, as it was then called. Until recently, Tesco executives inhabited no fewer than six government task forces.

The final arbiter of planning in England is the Secretary of State for Environment, Transport and the Regions. They’re just as crooked! In 1993, Secretary of State for Environment John Gummer installed a new division called the Construction Sponsorship Directorate (CSD), aimed at ‘helping the construction industry’. This was an organisation designed to lobby against legislation Gummer was in charge of enforcing! Key positions were occupied by industry reps. This helps to explain some of their scandalous decisions, such as agreeing to the construction of Manchester Airport’s second runway. Dismissed as unnecessary by transport consultants, and deeply unpopular with local people, it destroyed one of the most stunning landscapes in the northwest of England. More recently, we have the Heathrow third runway scandal, where the British Airports Authority got into bed with the Department of Transport. They ran the consultation on its behalf and were given access to all kinds of confidential information and were able to fiddle the figures.

Corporations dominate the political arena the world over. In Japan, they call it the iron triangle, referring to corporations, government and the labour bureaucracy. In India, one in four election candidates are millionaires. In the USA, George Bush raised a record breaking $130 million for his 2004 election campaign, donated by the likes of Pricewaterhouse Coopers, Goldman Sachs and Merrill Lynch & Co.

But, public awareness is growing. In Britain, according to a survey by the Committee on Standards in Public Life, 56% believe that half or more of ministers use their power for their own personal gain. In the USA, 90% now believe big business has too much power. More significant, is that 20% of Americans believe that socialism is superior to capitalism, according to the Rasmussen poll. The future of monopoly capitalism and all its trickery is beginning to look less certain.

In my next article, I’ll try to debunk the myth that capitalism is efficient, and show the enormous resources it squanders, and the destruction it causes. I’ll also explain, surprisingly, why there is a positive side to monopoly business, as I make the case for socialism.