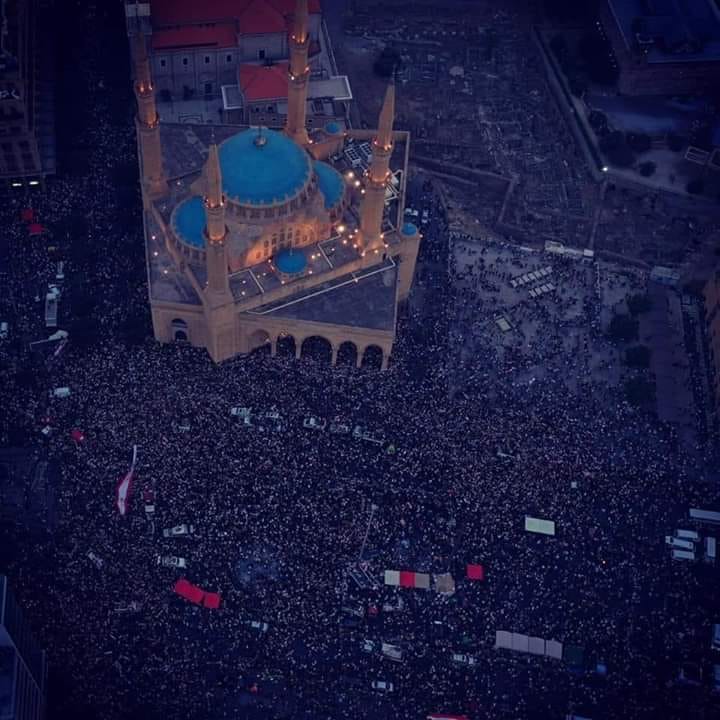 A powerful revolutionary movement has erupted in Lebanon, spanning the entire country and dramatically changing the political situation.

With a collapsing economy and an enormous amount of debt, the corrupt Hariri government has been desperately trying to find new revenues to meet its repayments and appease the International Monetary Fund and the World Bank, among other imperialist institutions. Unfortunately for anyone who isn’t a part of the corrupt regime in Lebanon, this has meant a cut to social services and increased taxation on the poor. The situation reached a breaking point when the government announced a planned levy on WhatsApp calls. The masses stormed the streets, with thousands of young people protesting on Thursday night. The next day, protests grew bigger and included families, workers, and the general population. This culminated in an enormous mass movement on Saturday, with over 1,200,000 protesting all over the country and an estimated 2 million on Sunday. In every province, Lebanese people of all religions have joined a movement that has crossed sectarian divisions. Without any organisation or leadership, the revolutionary masses have been braving violent oppression to fight against their thieving rulers. 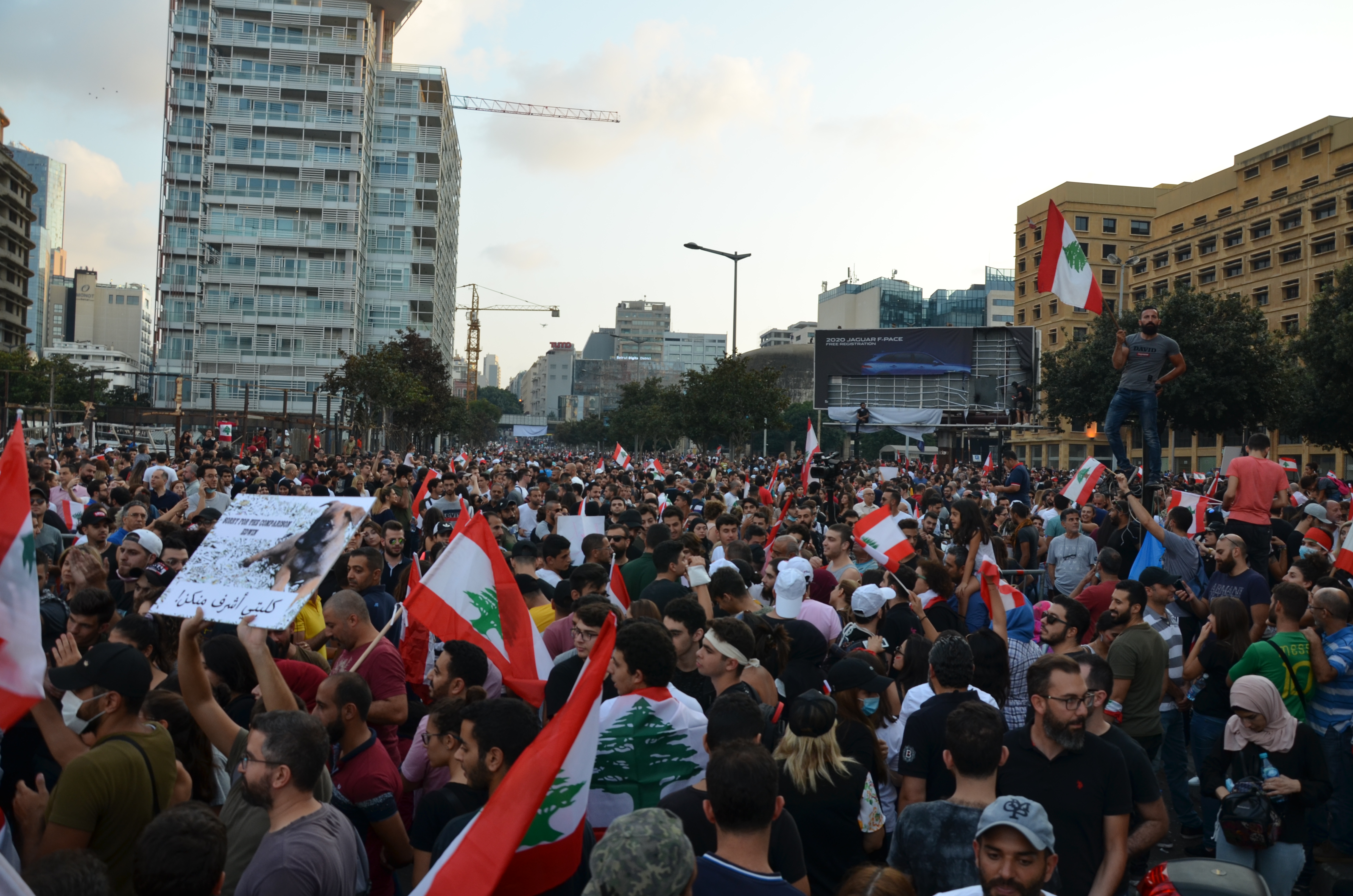 People are fed up and have united against their common enemies: the Hariri government, the Lebanese billionaires, and the imperialist bankers / Image: Julia Neumann

The movement has also been far-reaching. From the northern Jabal and Chouf provinces to the far-southern Jnoub, hundreds of protests have erupted. This has cut right across the religious divides that have been used by politicians for decades to maintain their power. People are fed up and have united against their common enemies: the Hariri government, the Lebanese billionaires, and the imperialist bankers that back them.

Economic turmoil: who pays for the crisis?

Lebanon sports one of the largest debt loads in the world, with 74.5 billion dollars in public debt, which amounts to 140 percent of GDP. This is coupled with massive inequality, as the country also has one of the highest billionaires-to-population ratios. With seven billionaires in total dominating the economy, this amounts to just over one billionaire for every 500,000 Lebanese people. Most of these billionaires come from either the Hariri or Makti families, which have been involved in government for decades and have been actively embezzling funds to carry out their own political or personal agendas. This is in the context of an overall unemployment rate of over 25 percent, with youth unemployment standing even higher at 37 percent. And these are official figures, which underestimate the gravity of the situation.

In 2018, the Lebanese government led by Saad Hariri met international investors from America and Europe in Paris. The IMF and the World Bank both pledged over 11 billion dollars in loans to Lebanon’s government on the condition that ‘structural reforms’ occur. In particular, the IMF has emphasised that a reduction in the deficit is necessary for this money to be released. This fancy language amounts to a programme of severe cuts inflicted on workers and young people to balance the budget. 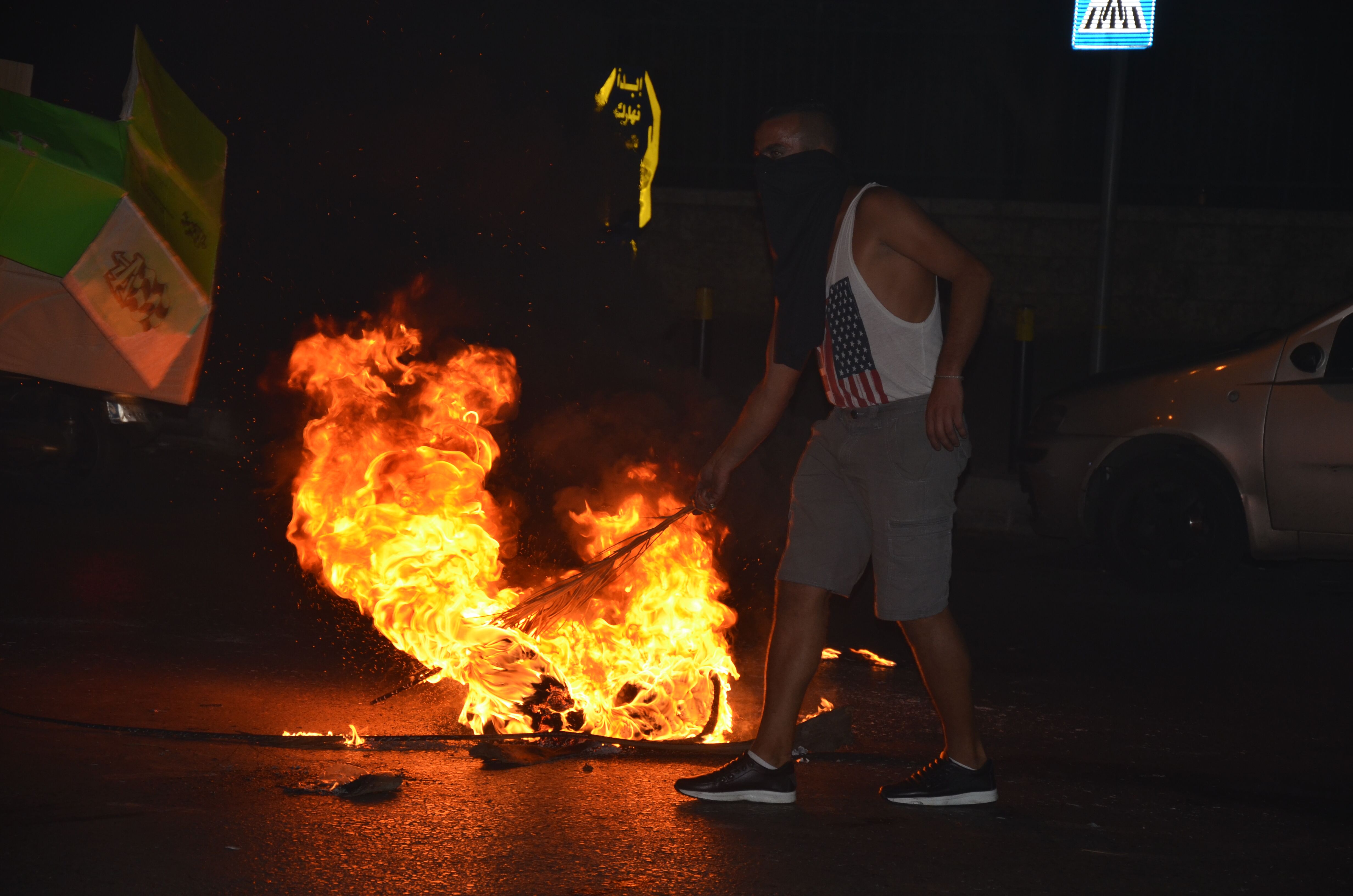 This means the ruling class is unburdening the full weight of the crisis onto the shoulders of the poorest. A programme of austerity began targeting working people as early as June. Pensions were cut, along with a public sector hiring freeze and cuts to any bonuses public sector workers would have received. Rightfully, this has enraged the masses in Lebanon who are struggling on a daily basis to survive. Basic services such as electricity and water barely run in most of the country. The most fundamental service of picking up garbage from the street was even halted for a time in 2015, and even now frequently fails to be provided. While the poorest survive day to day, from paycheque to paycheque, the politicians spend their time playing political games, intriguing and scheming to hoard more wealth and power for themselves and their cronies. Corruption is rife behind the veneer of Lebanese democracy and everyone can see this.

That is the basis for the movement on the streets. With almost a third of the population (nearly two million) protesting all over the country, this marks a new stage in the development of the class struggle in Lebanon. The rising anger against the ruling class has overcome all attempts to divide the masses, and has resulted in a unified, revolutionary movement seeking the overthrow of the government.

The people want the overthrow of the government

In the past, most protests and movements have been easily cut across by the religious politics of the country. From the formation of Lebanon’s political system, its governments have been based on religious factions. Different political posts are exclusively filled by Shia or Sunni Muslims, with other posts filled by the Christians. This was an intentional design by the French mandate that established the country, no doubt to divide the masses and ensure no movement could threaten the interests of the imperialists.

Despite this, it is clear from this movement that religious politics will not stop the masses. With a million marching in Beirut alone, protestors come from all religions and backgrounds. Shia, Sunni, Christian, and Druze all march together against a corrupt government that is living off the toil of the people. This is signified by the two most popular slogans of the movement: “Revolution! Revolution!” and “The people want the overthrow of the government!” Even Hezbollah leader, Hassan Nasrallah, has not been spared, with chants like “All of them means all of them, Nasrallah is one of them!” All attempts by the political leaders to reassure the masses with empty words have only emboldened them further. 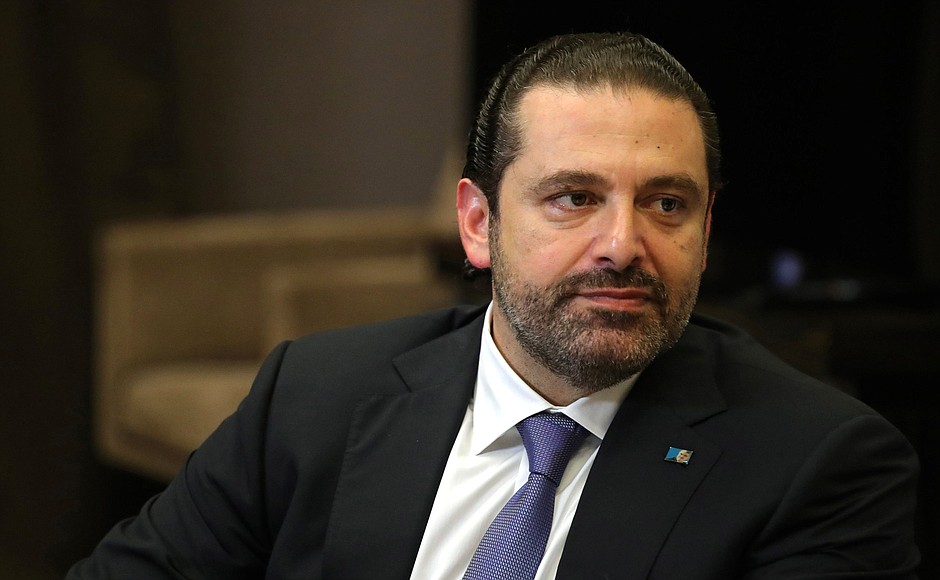 The two most popular slogans of the movement are: “Revolution! Revolution!” and “The people want the overthrow of the government!” / mage: PoR

For a century, the ruling class has used these main sectarian divides in the country to justify its own rule and its continued exploitation of the working class and the poor. But this superficial explanation has been revealed as a sham. Like a den of thieves, government ministers from all religions have been uniting behind their own class, and defended this corrupt government. Notably, even Nasrallah came out in favour of the government, stating that its resignation would be a “waste of time”. Hezbollah represents a section of the Shia bourgeois and petit bourgeoisie, but it has always presented itself as a party of the poor. As it has grown in influence, however, it has also acquired a larger stake within the state and the economy. It is also unofficially a part of the present government of “national unity” – which means a government of all parties to secure the stability of Lebanese capitalism. With his comments in support of the government, Nasrallah has revealed where his true interests lie.

This has exposed to the masses that none of the current political parties are to be trusted. The protestors have targeted ministers of all stripes, with Shia protestors attacking the offices of their deputies in southern Lebanon and being met with violence from Hezbollah militias. This is an unprecedented move, as southern Lebanon has been the stronghold of Hezbollah for decades. This highlights the crisis of the entire establishment. The masses have lost trust in the capitalist system and want to take their destinies into their own hands.

Already, due to this enormous movement, the Hariri government has recalled many of its cuts. The tax on WhatsApp calls that sparked the movement was removed almost immediately after the protests broke out, and four cabinet ministers have since resigned from the government. The new budget that Hariri is putting together promises no cuts or extra levies, and includes some structural reforms – but this is not enough. It is clear that the government has no answer to the crippling debt, unemployment, and the general deterioration of Lebanese society. This ‘solution’ is a sticking plaster that would only result in a continuation of the status quo. The main problem is not this or that tax, but the capitalist system, which has brought nothing but endless misery to the workers and the poor of Lebanon. 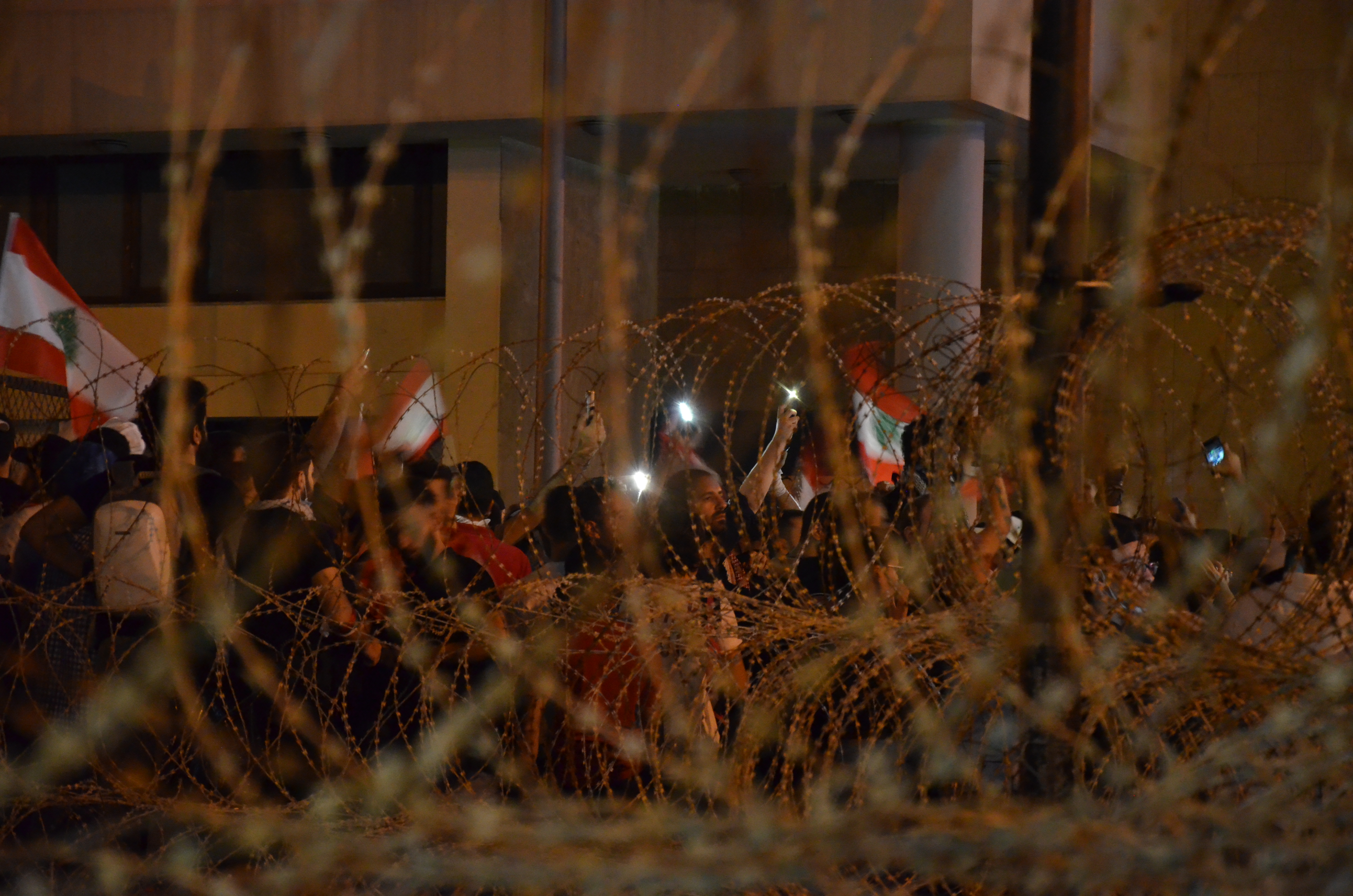 It is not the working people that must pay for this crisis, but the bosses and imperialists / Image: Julia Neumann

And that is why the masses keep pushing forward. Seeing the government giving concessions they were told only days ago were impossible, the masses are gaining confidence and feeling their collective strength. They might not realise exactly what they want, but they know that they cannot endure another day under the present conditions.

Despite their lack of organisation, the masses have been making calls for various demands. The resignation of the government is the most obvious one. But it is followed by other demands to end abuses by security forces, release all detained activists, and cancel any additional taxes imposed on the masses. There are also demands being raised against unemployment, inflation and corruption.

What is necessary now is to put all of this on an organised basis. First, the movement needs to bring in the working class, which is the only force with the ability to bring society to a complete halt. Already, activists have been sharing images declaring a general strike for Monday and the mood of the masses shows support for this idea. Committees of struggle should be set up in every factory, university, neighbourhood and village to coordinate the strike and the defence against state repression. Appeals must also be made to the rank-and-file soldiers in Lebanon to join the movement.

The committees should be linked up on a local and national level to discuss the demands of the struggle, such as bringing down the government, ending all repression, freeing political prisoners, reversing all austerity, the provision of electricity and water to the neighbourhoods, restoring pensions for public sector workers, and an end to the hiring freeze. Additionally, the question of nationalisation must be raised. For decades, the Hariris, Matkis and the rest of the tiny Lebanese elite have been leeching off the rest of the population. They must be expropriated, along with all of their cronies, and anyone else responsible for looting the state. Their companies and wealth should be used to raise living standards and develop Lebanese society as a whole.

Through an organised movement, the government could easily be brought down. It is the working class that produces wealth and keeps society running. Without the permission of the workers, Lebanese society would not function, and a general strike would put their power on full display.

It is not the working people that must pay for this crisis, but the bosses, bankers, and imperialists of Lebanon. They have lived off the backs of working people for decades. They cannot be relied on or trusted to change the conditions in the country. The people themselves must do that by taking power into their own hands in the streets. Everywhere you look in the Middle East, revolution is simmering beneath the surface. From Morocco to Algeria, Tunisia, Sudan, Egypt, Jordan and Iraq, the masses are once again turning against their decrepit ruling classes. Even in countries like Iran and Turkey, the movements have only been temporarily offset by clashes between the powers of the region. A victorious revolution in Lebanon would be a powerful impulse to reignite the movement on a far higher level than we saw in 2011.

Down with the government of thieves!

Down with the corrupt elite!

Forward to the Lebanese revolution!