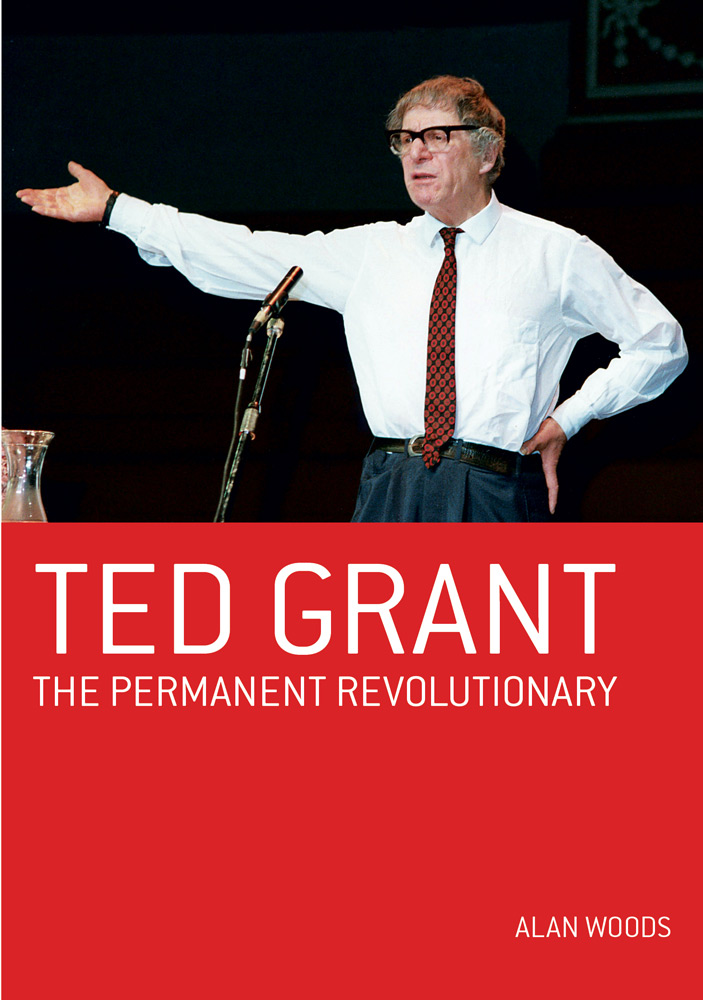 We are pleased to announce the publication of the new biography of Ted Grant written by his friend and collaborator for more than 50 years, Alan Woods. Below we bring you a review of the book.

Order the book from Wellred UK - or Wellred USA today!

I first met Ted Grant in July 1966 at a Young Socialists Day school. He was giving a talk about the Russian Revolution and made a big impact on me. As a consequence, I joined the Militant Tendency and helped to build what was to become a major force on the left.

Ted Grant had certainly made a significant impact on British politics as the founder and theoretical inspirer of the Militant Tendency. The success of Militant had turned us into a household name. Michael Crick, the BBC journalist, even described the Tendency as the fifth political party in Britain.

Not surprisingly, this remarkable success was denounced by the capitalist press, as well as by the rightwing Labour leadership. However, when Ted died all the most important newspapers carried extensive obituaries that recognised this impact.

This year marks the centenary of Ted Grant’s birth. As a contribution to the celebration of this event, Alan Woods, who had known Ted for nearly 50 years and was his closest collaborator, has written his political biography, highlighting his unique contribution to the Marxist movement in Britain and internationally.

The book is a truly remarkable work which, using recently uncovered archive material, comprehensively covers the development of Ted’s life and ideas, starting from his early family background in Johannesburg right up to his death in London in 2006 at the age of 93.

From his earliest days in South Africa, Ted Grant dedicated his life to the struggle for the emancipation of the working class. Having joined the Trotskyist movement in the late 1920s, he moved to Britain in 1934 to seek new horizons. Within a decade Ted had become the leading theoretician of the Trotskyist movement.

The book deals with the launch of the Fourth International and Ted’s battle to defend the ideas of Trotsky, which brought him into conflict with the leaders of the International after the Second World War. It explains the important theoretical questions and debates of this period and it outlines Ted Grant’s important theoretical contribution to Marxism.

The biography traces the break-up of the Revolutionary Communist Party, which was largely as a result of the intrigues of the so-called leaders of the International around James Cannon, Ernest Mandel, Pierre Frank, Pablo and others, who were assisted in this criminal sabotage by Gerry Healy.

In Defence of the Theory of Marxism

In the 1950s, Ted was left with a small handful of comrades, including the Deane family in Liverpool. This was the most difficult period, when, without resources, they had to piece together an organisation. These were the dark years in the wilderness. Ted provided the theory and ideas, as well as the enthusiasm and optimism to keep things going and served eventually to rearm the movement.

The book reproduces letters from Ted’s brother and sister as well as his close comrades, which give a valuable insight into the difficulties and problems confronting Ted personally and politically.

Despite a number of mistakes and dead ends encountered, Ted and the small group around him managed to pull things together with the launch of the four-page black and white monthly paper Militant. Even then, things did not go smoothly. The Young Socialists had been closed and reorganised after the hooligan activities of Healy and his supporters. However, after a period of patient work, things began to improve and by 1970 the Tendency won a political majority in the Labour Party Young Socialists.

While all the other groups had left the Labour Party, the Militant remained and grew from strength to strength, especially with the shift to the left after the defeat of the Wilson government.

Eventually, the Militant built up a powerful following not only amongst the youth, but also in the trade unions and the Labour Party. It patiently built a key position in the Liverpool Labour movement, which eventually enabled it to control Liverpool City Council in the 1980s. By this time, it had 3 MPs and thousands of supporters. This success unleashed a massive witch-hunt against us, promoted by the strategists of capital who feared an increasing leftward lurch in the Labour Party. They were not bothered about the 57 varieties of “revolutionary” sects outside of the mass organisations. They were considered a joke.

The Working Class and its Organisations

Even the most moribund and right wing unions were affected, and so was the Labour Party, the political expression of the trade unions.

For the sects, this is always a closed book. They do not see things dialectically, but simplistically: the right wing leaders betray the workers; therefore we need a new party. Simple! The only problem is the workers take no notice of them.

Ted explained repeatedly that when the masses move politically, they will move through their traditional organisations – despite the leadership! They will take the line of least resistance. That is a social law.

In March 1959, Ted wrote one of his most important and influential works, Problems of Entrism, in which we read the following:

“To the sectarian splinter, groups the independence of the revolutionary party [is regarded] as a principle, whether the party consists of two or two million.

“They do not take into account the historical development of the movement of the working class, which conditions the tactics, while maintaining the principles of the Marxists. Without flexible tactics it is impossible to win or train the forces which must be won before a revolutionary party can be built.

“Unfortunately, the movement of the working class does not proceed in a straight line. Otherwise, all that would be necessary would be to proclaim from the street corners the need for a revolutionary party – as the SPGB has proclaimed for 50 years the superiority of Socialism over capitalism – but with completely barren results.

“We have to start with an understanding of the working class and the Labour movement as it emerges historically, with the consciousness determined by objective conditions on the one hand, and the betrayal of Stalinism and Social Democracy, which for us are objective factors, on the other hand; and the weakness of the revolutionary forces, which also becomes an important factor of the historical process. How to overcome the weakness and isolation of the revolutionary movement, whilst maintaining its principles intact, is the basic task of this epoch.

“Alas! The movement of the working class rarely moves in a straight line. Otherwise capitalism would have been overthrown decades ago…

“However, it is one thing for the cadres of the revolutionary movement to understand the role of Stalinism and Reformism; it is a different matter for the masses, and even for the active advanced guard, who in general only learn by experience.”

Ted said that in developing a Marxist Tendency, apart from the necessity of Marxist theory, one needed a sense of proportion and a sense of humour. This sound advice will hold us in good stead for the future.

The book traces not only the rise of Militant but also its demise. It provides a fascinating insight into a subject that remains a closed book to most political analysts even now. The dangers of opportunism and ultra-leftism are always present. The attempt to shout louder than your own voice has always led to shortcuts and adventurism. The successes went to their heads and this was one of the main causes that wrecked the Militant. Ted went on to establish Socialist Appeal.

This is a truly amazing story of a truly amazing man, told with style, colour and wit.  At the end you will feel that you have known Ted Grant all your life.  The book is essential reading for all socialists.