Michael Moore’s new film exposes capitalism for what it is: a system based on the ruthless exploitation of the many by the few, who shamelessly loot people’s lifelong savings, the public treasury, and kick millions out of their homes. By the end of the film, capitalism stands roundly condemned, however, Mike is less clear as to what he is actually for. The Workers International League thinks it is important to state what is: capitalism is the problem, and socialism is the solution. 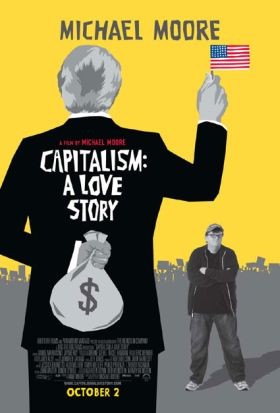 A year after the collapse of Lehman Brothers set off a financial avalanche, the US economy remains in a mess. Official unemployment is steadily creeping toward 10%, as forty-two states lost even more jobs in the last month, bringing the total losses since the recession began two years ago to nearly 7 million. The number of people forced to work part-time jobs due to not being able to find full-time work has risen by over 50% in the past year to 8.8 million. In just one month, 25,000 more manufacturing jobs were lost in Michigan alone. The state now has an unemployment rate of 15.2%.

Health care remains the number one issue facing working Americans, as the average premium for family health insurance offered through an employer surpassed the $13,000 mark this year, far outpacing increases in wages and inflation. Fewer employers offer coverage and those that do are passing greater costs along to their workers. And those are the lucky ones. If you lose your job, forget about it.

The National Academy of Science has developed a new formula to more accurately classify poverty, and found that 15.3% of all Americans live in poverty, up from the 12.5% estimated under the old guidelines. That’s 45.7 million people – the equivalent of the entire population of Spain. Among the most affected are the 6.8 million elderly Americans who live below the poverty line – so much for the “Golden Years!”

But for a handful of Americans, it is the “Golden Years” – Goldman Sachs, that is. This monster financial powerhouse, whose former executives hold key positions at the Department of the Treasury (including Obama-appointed Treasury Secretary Timothy Geithner), recently set aside $11.3 billion to hand out in bonuses – just months after receiving $10 billion in taxpayer bailout money. No wonder ordinary Americans who have never really doubted the system are starting to ask some questions!

Mark Benson, a 39-year old restaurant manager from Chicago, was recently quoted by Reuters: “I guess I ended up in the wrong career. It must be nice to work on Wall Street, when you profit you get a bonus, when your company fails you get a government bailout then a bonus. I’m all for free enterprise, it’s what built America. But when Wall Street screws up so badly that the government has to print money to bail them out, I confess the bonuses they’re still paying themselves make me feel sick.”

Annie Phillips, a 48-year-old housewife from Nashville had this to say: “Out here in the real world, people are unemployed and hungry and those bankers and the other big shots don’t give a damn.”

Federal Reserve chairman Ben Bernanke says that the worst of the recession is almost certainly over, and if you look only at corporate profits and overall economic growth, there may be a grain of truth to it. But this slight improvement is the result of massive deficit financing by the government and fewer workers doing more work while millions of others rot away on the unemployment line. Wall Street may be back “in the money,” but ask any ordinary worker, and you will get a different answer. In fact, a recent poll by the Associated Press found that 80% think the economy is doing badly and worry about whether or not they can make ends meet. 70% of Americans lack confidence in the ability of the government to prevent another financial industry meltdown. Just 17% believe the government stimulus package has done anything to improve the economy.

Judy Purkey, a 57-year-old grandmother from Morristown, TN was quoted as saying: “I know a lot of people who don’t have health care and really can’t afford it. The economy is so bad. You’ve heard the expression getting blood out of a turnip? – Well, that’s what’s going on.”

As for who’s to blame for the mess, Americans are still giving President Obama the benefit of the doubt, with just one in five condemning him for this situation. Not surprisingly, over 50% blame former President Bush. Congress gets its fair share of the blame as well. But perhaps most revealing is the fact that that 79% of those polled blame the banks and lenders – i.e., the capitalists.

It is against this volatile background that Michael Moore premieres his latest film, Capitalism: A Love Story. The fact that a film with such broad distribution even openly calls out the system by name is a tremendous step forward, a reflection of how far Americans’ consciousness has come since the dark days of September 2001. The film is a remarkable exposition of the realities of the system we live under. He exposes capitalism for what it is: a system based on the ruthless exploitation of the many by the few, who shamelessly loot millions of people’s lifelong savings, the public treasury, and kick millions out of their homes. By the end of the film, capitalism stands roundly condemned, and the viewer inevitably has to ask: why is it that in the richest country on earth we cannot provide jobs, health care, housing, and education for all. Moore effectively combines humor, heart-wrenching tragedy suffered by working people, irony, music, and reams of clearly presented facts and figures to provide an answer: capitalism is the problem.

Although Moore has long been a champion of working people and a “liberal” in the broadest sense of the word, his new film is definitely his most politically audacious yet. Not only the film, but his publicly stated views have become increasingly radicalized, as he has become emboldened by the rising anger against the excesses of the system. As he said in a recent interview:

“It’s been a year [since the collapse on Wall Street], and I haven’t seen a single talk show or single edition of ‘Meet the Press’ or an op-ed in the New York Times where they’ve allowed a voice to state the following: ‘The real problem...is capitalism itself.’ It’s an economic system that doesn’t work. It’s not fair, it’s not democratic, it’s not just and it’s got to go. I know I’m not the only person who feels that way, so why haven’t I heard it, why haven’t I read it, why is that part of the debate removed from the discourse? Capitalism is a beast. It will never stop. It has an insatiable desire to make money. You can put as many strings or ropes around it as you want but it will break through. There’s no such thing as enough with capitalism.”

This is incredibly bold and refreshing stuff. However, Moore is less clear as to what he is actually for. He clearly understands that the system can’t be reformed, that it must be replaced. Or, as one of the priests interviewed in the film puts it, “capitalism is evil, and you cannot regulate evil; you have to eliminate it.” However, it seems that Moore is still unwilling to draw the necessary conclusions – or at least he is unwilling to state this openly.

The Workers International League thinks it is important to state what is: capitalism is the problem, and socialism is the solution. Socialism isn’t a dirty word and revolution isn’t a shadowy conspiracy carried out by a minority. The socialist revolution means nothing more nor less than bringing about a fundamental change in how society is structured and administered, through the direct, democratic, and conscious participation of the vast majority of society.

Moore, on the other hand, prefers to call for “democracy,” and draws on recently discovered film footage in which FDR – the savior of capitalism during the Great Depression – calls for a “Second Bill of Rights.” In this speech, FDR calls for the right to a good job, universal education and health care, and an end to racism. Now, whether he raised these points purely demagogically in order to rally the flagging spirits of the country behind the war effort, or whether he truly thought such reforms could come about within the limits of capitalism, we cannot know. But the fact is, capitalism has not been able to guarantee any of this to the entire population.

So we must ask ourselves: if it was unable to provide these basic demands during the long post-war boom or the recent capitalist bonanza, how can it possibly give us even a tenth of this during the current crisis? The Marxists are in favor of all of these things, however, we believe that they can only become a reality by fighting for socialism. Not the totalitarian caricature of Stalinism and Maoism, but democratic socialism, in which the workers democratically control the means of production, distribution and exchange, in harmony with the environment.

And although Moore skewers and exposes the Democrats throughout the movie, he gives Obama himself a pass. He presents the Obama election as a kind of rapture for suffering humanity. It is clear that Obama’s ascent to power was propelled by the heartfelt aspirations of millions of ordinary men and women, especially Blacks and other minorities. However, as a supporter of the effort to form a Labor Party in the late 1990s, Moore should know better: just as capitalism cannot be reformed, neither can the Democratic Party be reformed. Unfortunately, when Socialist Appeal asked Moore at a preview screening of the film whether or not he thought it was time for the unions and workers generally to break with the Democrats, he said that while he supports third party efforts, his advice was that it would be easier to reform the Democrats from within. This is akin to asking a lamb to go tidy up a wolves’ den!

Nonetheless, from his expose on how major corporations make millions by taking out life insurance policies on their employees (referred to as “Dead Peasant Insurance” in internal memos), to the footage from inside the factory occupation at Republic Windows and Doors, Moore relentlessly hammers the capitalist system and draws attention to the power of ordinary people if they organize.

The profound hope for change that swept the country after Obama’s election contains within it the embryo of a real force for change – the working class majority itself. After a roller coaster of images and emotions, Moore calls on the viewing audience (which will number in the millions) to get organized and mobilize to bring about real change. The film then ends with a swing jazz version of the “Internationale.” Is Moore’s reluctance to call openly for socialism a calculated move to avoid being red-baited, demonized and discredited by the rabid right? Or is it because he is still unclear and unwilling to truly make a break with the system? Either way, Capitalism: A Love Story will open the eyes of millions in a way never before seen in a film with such a broad audience. Whether he calls it “socialism” or “democracy,” Moore seems sincere about wanting to end this system and replace it with something better. With the AFL-CIO now calling for single-payer health care and Moore’s new movie sure to inspire thousands to get organized and fight back against the attacks of the capitalists, there has never been a better time to fight for a mass party of labor and learn more about the ideas of revolutionary socialism and Marxism.