Ireland
Share
Tweet
The second edition of Alan Woods' book on Ireland, Ireland: Republicanism and Revolution, has just come out, the first edition having sold out. It is now available again to order from Wellred Books. 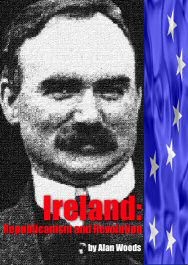 "Serious revolutionaries, genuine Marxists, committed Republicans will read this book with thoughtful interest. They will give it the respect it deserves... We firmly believe that if this book by Alan Woods begins a process by which Republicans and socialists return to Connolly and the best ideas of the Irish and international left, then the future struggle for socialism in Ireland will be greatly advanced." (From the preface by Gerry Ruddy, a leading member of the Irish Republican Socialist Party)

Now in its second printing, this short but informative book by Alan Woods analyses the role of capitalism and imperialism in Ireland throughout the last few centuries and examines how this is impacting on the current situation. As a history of struggle it serves to raise again the banner of such people as Larkin and Connolly and the need to return to their ideas and traditions. Above all, this book raises the importance of the fight for a socialist Ireland and a socialist Britain as the only way to achieve the goal of a united Ireland.

Starting with a review of the national question as it applies in Ireland, this book goes on to show how capitalism has constantly failed to resolve this issue with terrible consequences for the working class. It then attempts to give a graphic history of how the people of Ireland fought back against the appalling repression they faced at the hands of the landlords and capitalists. Starting with Wolfe Tone at the end of the 18th century, this book works through the great events of the real history of Ireland - the Dublin lockout, The Easter Rising, the fight for civil rights, Bloody Sunday and so on. It looks closely at the political roles played by those at the head of these events and draws out the essential lessons for today. Finally the book takes up the questions now being posed following the Good Friday agreement and the abandonment of the fight for a united Ireland by non-socialist Republicanism. None of the historic problems being faced by the Irish working class have been solved. This book is intended to spark a discussion amongst the ranks of the most class-conscious workers and youth in Ireland as to what lessons must now be drawn and what is now the way forward.

The Preface to the book can be read online.

And the book can be ordered from Wellred at the discounted price of £5.99.