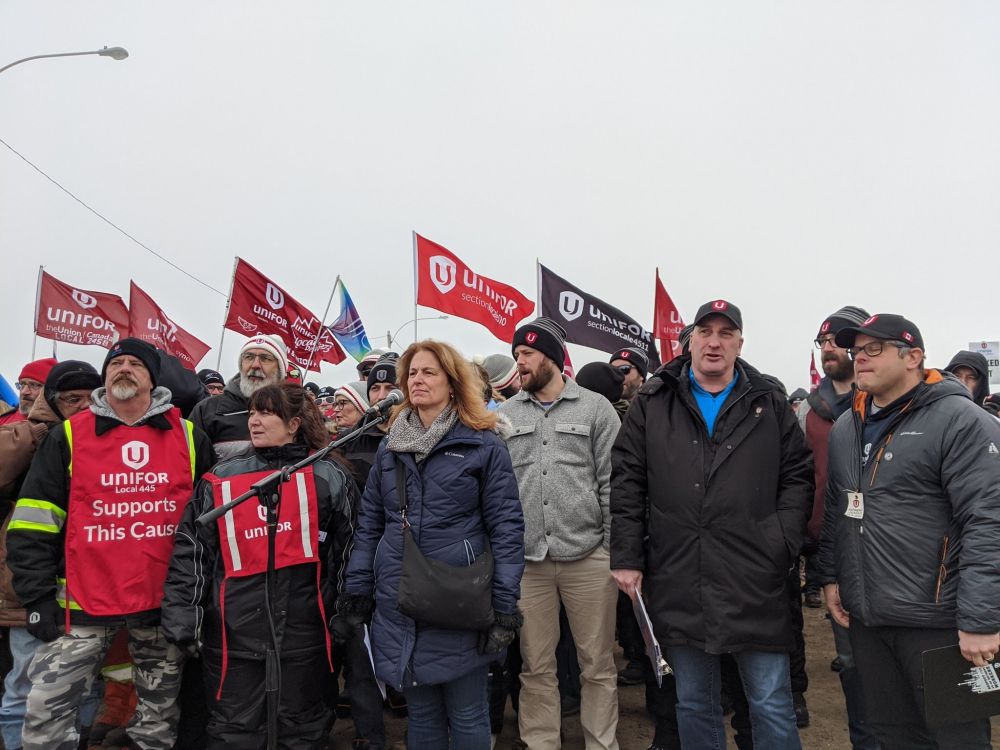 A line has been drawn in the sand. Finally, a union is defying unjust laws. The 760 workers of Unifor Local 594 and Unifor national president Jerry Dias are holding their ground in the dispute with Co-op Refinery in Regina and are saying that they will not obey a court injunction against hard pickets. This is a decisive turning point in the class struggle in Canada. It is beholden on the entire labour movement to rally to the support of Unifor in this struggle, and spread the movement to defeat this brazen attack.

After six weeks of lock-out, the stand-off between workers and Co-op Refinery escalated dramatically with police violence on Jan. 20. Over a dozen Unifor members, including Unifor President Jerry Dias, were thrown into the back of a paddy wagon for enforcing their picket. Since Dias’ arrest the union has appealed for support from across Saskatchewan and the country and is pledging to maintain the picket lines. The workers are heroically defying court injunctions meant to limit picketing and are facing down hundreds of dollars of fines.

The importance of this struggle should not be downplayed. The social contract between labour and the bosses, established during the postwar boom, is a thing of the past. Indeed, the last time a prominent Union leader was arrested on a picket line in Canada was in 1979 when Canadian Union of Postal Workers President Jean-Claude Parrot refused to comply with back-to-work legislation. Over the past 40 years, the capitalists and the government have increasingly curtailed the right to strike. After decades of allowing picket lines to be broken, a leader of a union has finally shown willingness to risk imprisonment to prevent it. “We’re standing up for workers’ pensions, we’re standing up for workers’ rights, and this is how they treat us here,” said one of the Unifor executives as he was being dragged away by police alongside Dias.

As we wrote in 2018, the post-war social contract is dead, and workers are being forced into heated confrontations with the bosses,

"The class war politics of the bosses, the crisis of capitalism, and the logic of the movement leads us to the conclusion that illegal strikes and factory occupations will be on the agenda sooner or later. The 50s and 60s will never come back, and we should stop looking to this period as if it will. It has been ten years since the 2008 crash, and we are supposedly in the midst of a recovery. But this “recovery” has not improved conditions for the workers and a new global downturn is imminent. The bosses have decided to go back to 1930s methods of struggle. The workers have no alternative but to react in kind."

On Jan. 22, 2 days after his arrest, Jerry Dias gave a press conference at a hotel in Regina where he said,

Across the country, defying the law has been taboo for labour leaders. Finally, this pattern is being challenged in a significant way. This means that the struggle in Regina has become a watershed moment for the Canadian labour movement, as well as for general politics. Now more than ever Unifor 594 workers need support from across the country, from all unions and workers, uniting and rallying behind them. There must be an active campaign to spread the movement in support of the locked-out workers and defeat the attacks.

Co-op wants to break the union

Over the past 5 weeks, Co-op Refinery has shown that it is waiting for the police, courts and government to do the dirty work of breaking the union for them. The inciting issue at stake is an attack on pensions. Co-op clearly wants to gut pensions, forcing the workers away from a defined-benefit pension plan, which guarantees a certain amount of money on retirement, to a defined-contribution plan, which leaves retirement savings vulnerable to the whims and fluctuations of the market. But the dispute has represents a broader struggle as well. As Dias explained in his speech,

"This is a company that is spending hundreds of millions of dollars in scab camps, paying higher wages for the scabs and helicopters. They are spending far more money to somehow break the solidarity of our members than it would cost to ever reach a settlement…

"Because you see, for working-class people in Canada and globally, all the rules are stacked against us. You can have corporations that are making $3 million a day. That make promises, that say, 'Ah, we changed our mind.' And they will do that knowing that the laws are stacked against working-class people. They will do that knowing that they can fly in scabs and show their outrageous wealth by doing it. The helicopters are not only bringing in the scabs but it’s a show of power and a show of corporate wealth. It’s a symbol of all of that. And then of course they know that the police will be there to make sure the trucks will come and go with unfettered access, somehow ensuring that the workers’ ability to free collective bargaining is diminished."

It has become abundantly clear that Co-op is relying heavily on the assistance from the state (courts, police, provincial government) to run right over the democratic rights of the Unifor workers. This has put immense pressure on the workers which in turn has put the Unifor leadership in a position to take measures they have not used in the past. For example, in the fight to save GM Oshawa, Dias and Unifor National executive discouraged the workers from breaking the law with wildcats and occupations. The result was the loss of over 2,000 jobs, as we explained. Now the pressure of the workers and the reality of past failures is helping union leaders like Dias see the limits of legalism. Dias added, “We are not going to surrender as a precondition of going back to the bargaining table.” No surrender is the correct attitude to beat back the attacks.

The situation in Regina is not a normal struggle. Unifor workers have drawn a clear line in the sand, physically blocking the entrance of trucks to the refinery despite a court injunction and police threats, arrests, violence and fines that have reached $100,000. But these workers cannot hold the lines alone. It is a positive development that the leader of the Canadian Labour Congress, Hassan Yusuff, and CUPE National President Mark Hancock have come to the lines. However more action needs to be taken in order to unite behind these workers.

Co-op will step up the pressure to try to break the picket line again. They will continue to rely on the Regina police to violently break it apart and arrest more workers. The Canadian labour movement must clearly and boldly reject this disgusting violent action. There are many more workers than police officers in Regina alone. The day of the arrests and violent attempt to break the line, Jan. 20, was also Martin Luther King day. In this context, Dias quoted King when he said, “One has a moral responsibility to disobey unjust laws.’” 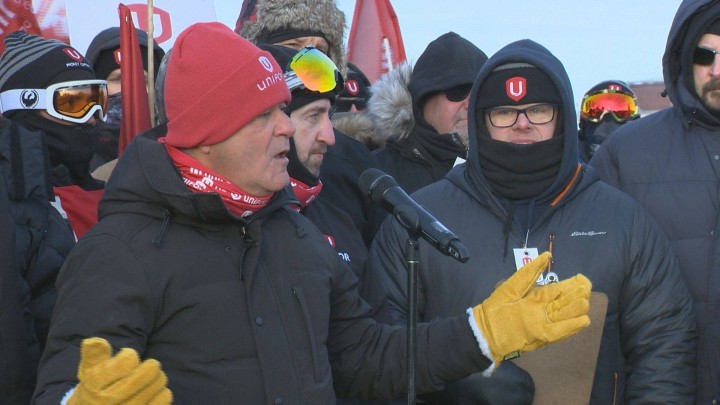 The battle in Regina has moved beyond the normal back and forward of labour relations and is a struggle symbolic of all the legal limitations on trade union rights in Canada / Image: Global News

This is a powerful lesson for the labour movement across this country. The laws are made by the capitalist system and enforced in the interests of the capitalists. This struggle naturally has defied the law because it is clear that the law does not represent the interests of the workers. Therefore, the battle in Regina can only be won on the ground and not in the courts.

There needs to be mass solidarity picketing in Regina by thousands of workers to make sure not a single truck comes in or out of the plant. But to win, the movement should not stop there, but be spread further. The union has called for a boycott of Co-op products, which is correct. But this boycott needs to be backed up by material force. Solidarity pickets should be organised against any location related to Co-op and a hot edict be declared so that no union worker will touch Co-op property. Canada Post workers should refuse to touch Co-op mail, and members of management should be booed whenever they show their face at a restaurant or theatre. They should face the shame of organising scabs to destroy the livelihoods of the workers and their families. Solidarity pickets can be organised to bring out workers in related industries.

This has moved beyond the normal back and forward of labour relations and is a struggle symbolic of all the legal limitations on trade union rights. It is vital that the workers win.

Read the original at Fightback |