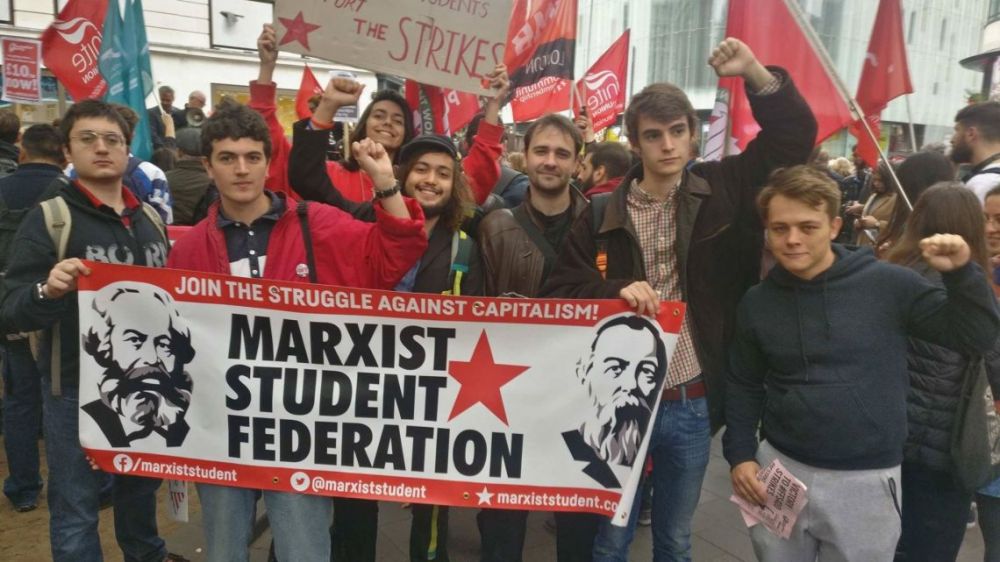 Once again, this autumn, Marxist students have been hitting campuses up and down Britain, signing up eager students to university Marxist societies. This year has been the most successful yet for the Marxist Student Federation (British youth organisation of the IMT), with thousands signing up to join societies across 33 campuses, and hundreds attending meetings all over the country.

The term kicked off with the Edinburgh and Glasgow university freshers’ fairs. A successful meeting on ‘What is Marxism?’ in Edinburgh was followed by a 50-strong meeting on the same topic in Glasgow. 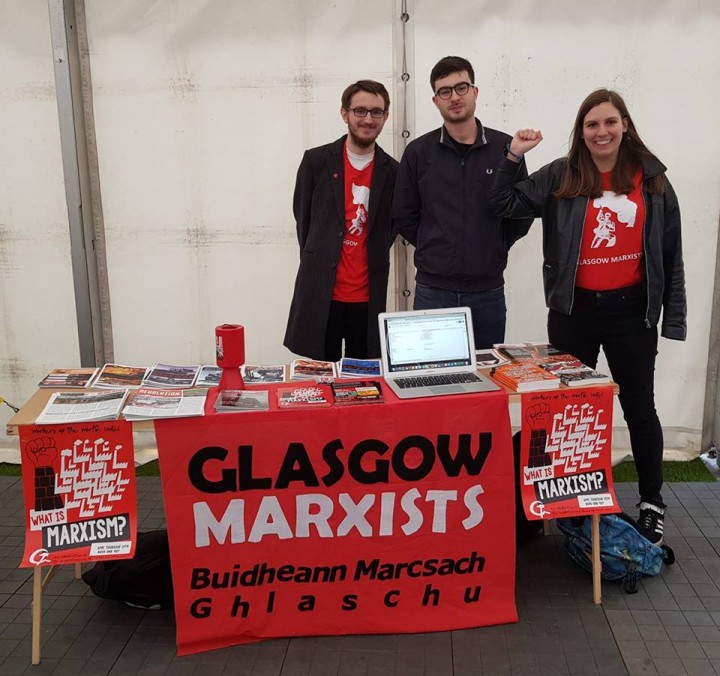 After their meeting, the attendees at the Glasgow Marxists meeting went on a Red Clydeside pub crawl, on which they took the Glasgow subway to various spots of revolutionary significance around the city. These include the location of the 1915 rent strike and the site of the 1919 Battle of George Square, during which British tanks were used against striking Glasgow workers. 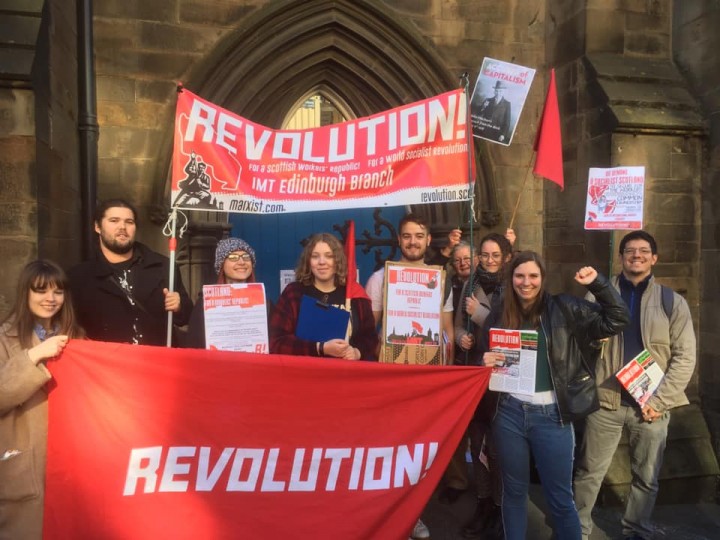 Members of both the Glasgow and Edinburgh Marxist societies marched alongside tens of thousands of others in Edinburgh last weekend for the biggest ever demonstration for Scottish independence.

In the North, the Manchester Marxist society, which this year has dual registration at both the University of Manchester and Manchester Metropolitan University, had a first meeting of 30 students. An excellent freshers’ fair in Hull, and a superb first meeting in Sheffield was accompanied by 50 people at the first meeting of the Leeds Marxists to tackle ‘The Myths about Marxism’, which dealt with questions of human nature, economic determinism, and the feasibility of revolution in Britain. 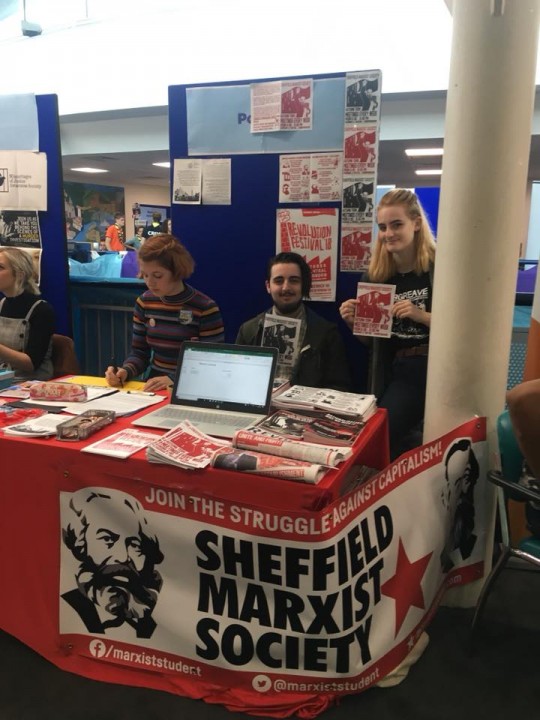 In Liverpool, the chair of the University’s UCU branch spoke at the Marxist society’s first meeting about the ongoing strike ballot amongst university staff. The Liverpool Marxists also participated in the Labour Party Conference by building support for the Labour4Clause4 campaign amongst delegates. 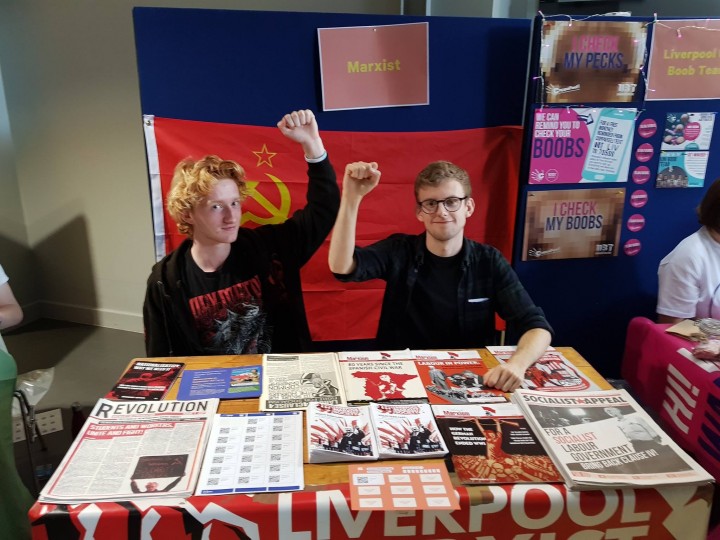 This year, the Durham Marxist society has been officially re-registered as a society and signed up almost 100 new people. The Newcastle Marxists meanwhile had 30 at their first meeting and are excited about setting up a Marxist society at Northumbria University this year.

On the south coast, a new Marxist society is being registered at Portsmouth University, after a successful freshers’ fair. And in Sussex and Southampton, which had 40 new people between them at their first meetings, the Marxist societies are looking to make big steps forward this year. In the last week alone, the Southampton Marxists have held a meeting on ‘What would socialism look like?’, a reading group, and a film screening of Leon Trotsky: Life of a Revolutionary. 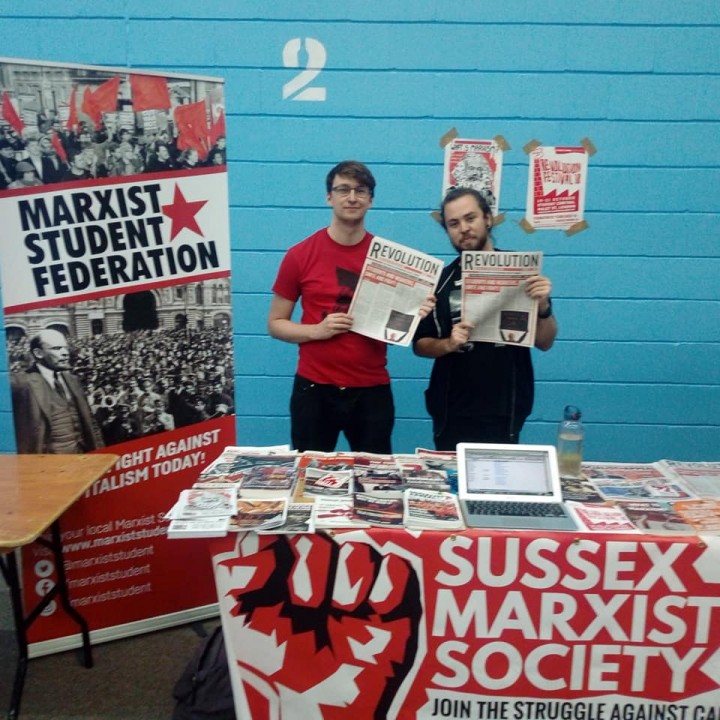 Meanwhile, the Kent Marxists signed up 120 new people to the society this year, have held a very successful first meeting and established a Communist Manifesto reading group. 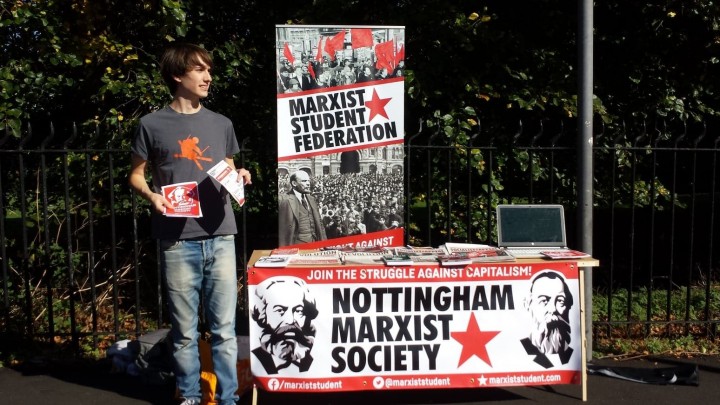 At the end of September, Birmingham was the site of the Tory party conference. Marxist students from Sheffield, Leicester, Warwick and Manchester joined the trade unionists and other activists in descending on Birmingham and joining the demonstration to oppose the Tories. 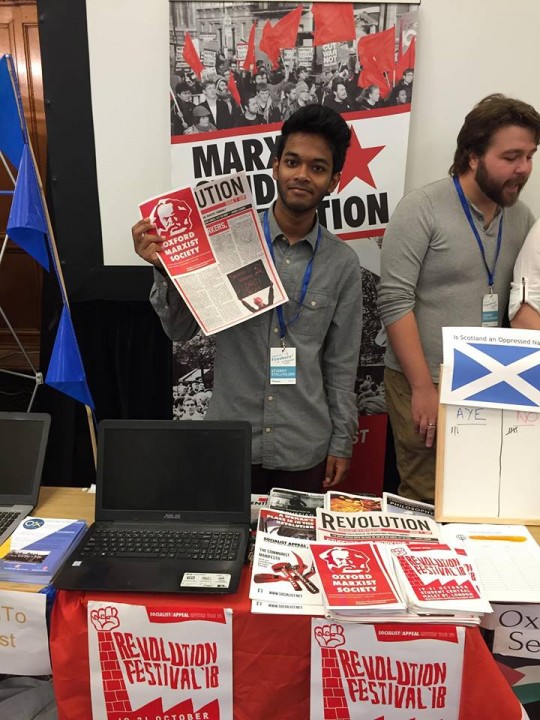 In the West, a new Marxist society has been set up in Bath, to which over 50 people signed up in just one day, and who will be holding their second event of term this week: a reading group on The Communist Manifesto. 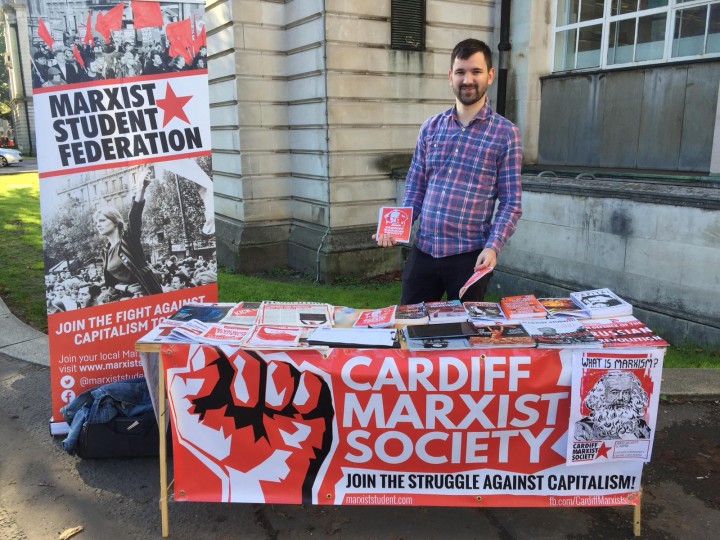 Meanwhile, in Wales, the freshers’ fairs in Swansea and Cardiff signed up almost 100 new students and have set the Marxist societies up for what will be the best year yet for Marxism in Wales.

In the East of the country, the Marxists at the University of East Anglia have kicked off the year as the largest and most dynamic political society on the entire campus. And with 200 new people signed up to the Cambridge Marxists, the forces of revolutionary socialism in this part of the country are going from strength to strength. 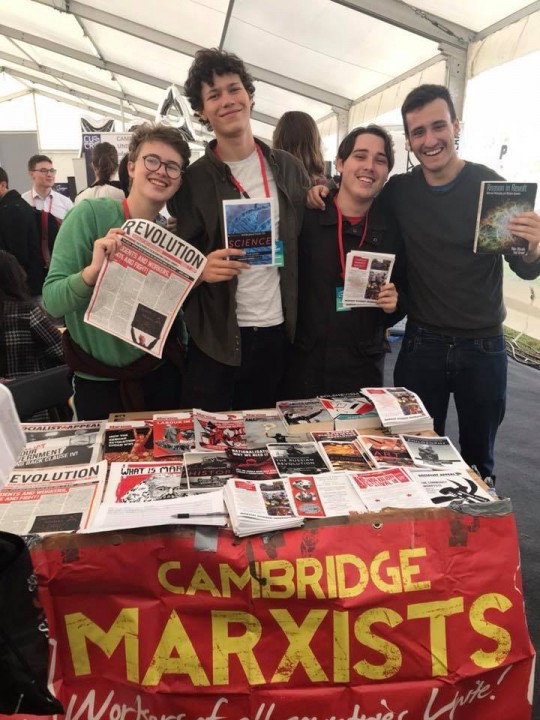 In London, Marxist students were at the Westminster freshers’ fair and are setting up new Marxist societies at Brunel University and Imperial College. Already there is a newly registered Marxist society at Goldsmiths. This expansion is on top of the Marxist societies that have had a great start to the year at UCL, KCL, LSE, Queen Mary, and SOAS. Altogether, just over 700 students in London have signed up to Marxist societies this year. 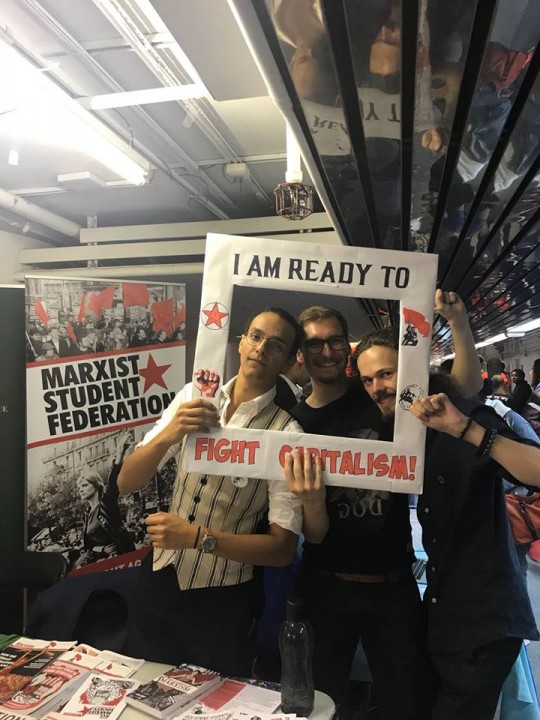 All the London Marxist societies, as well as the Sussex Marxist society, joined the hospitality workers from McDonald’s, Wetherspoon’s, and TGI Friday’s on strike on 4 October. We were on the picket lines and at the rallies in Leicester Square and in Brighton to participate in this exciting new development for trade unionism in Britain and to offer our solidarity to the workers risking victimisation and intimidation from management for exercising their right to organise. 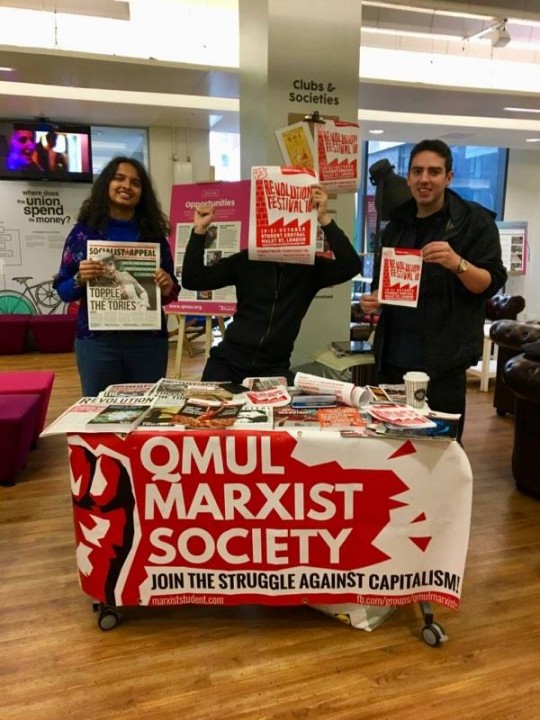 A couple of days later, this was followed by a highly enjoyable Marx Walk around London, touring the places that Marx lived, worked, and socialised for the 34 years of his life he spent in the city, including where he wrote Capital, and where the Communist League commissioned Marx and Engels to write The Communist Manifesto. The 40 people who came along had a great time and were thoroughly inspired to continue the work of Karl Marx today, despite the pouring rain!

Overall, thousands of students have signed up to Marxist societies across 33 campuses this September, and hundreds of new people have attended meetings to discuss revolutionary ideas. We’ll be holding meetings, running reading groups, organising campaigns, and linking up with the labour movement nationally and internationally. The forces of Marxism have never been stronger. There has never been a better time to be a revolutionary. 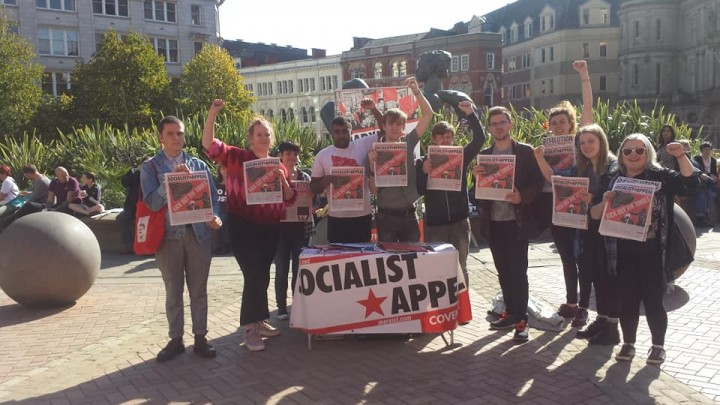