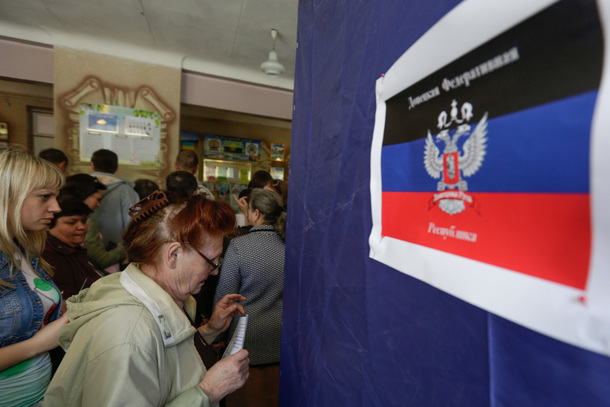 The holding of the referendums in eastern Ukraine represents a new and potentially dangerous twist in the Ukrainian crisis. The representatives of the people of the Donetsk and Luhansk regions say 89% and 96% respectively voted in favour of self-rule.

These referendums were held despite an earlier call by Russian President Vladimir Putin for a delay in order to create the conditions necessary for dialogue. This fact gives the lie to the much repeated allegation that the movement in the eastern Ukraine has been organised and carried out under the control of Moscow. The workers of the Donetsk and Luhansk regions ignored the appeals from the Kremlin and asserted their rights against all the intense pressure exercised by the outside world and backed up by the bullets and armoured cars of the Kiev government.

As usual, the coverage of the referendums in the western media has been characterised by scandalous one-sidedness, bias and malice. BBC reporters highlighted the lack of electoral facilities, such as the shortage of polling stations and claimed to have seen people voting twice. The improvised character of the referendums is very clear. How could it be otherwise in the middle of a popular revolution? But the improvised nature of popular consultations organised by the revolution does not make them one whit less democratic that the polished machinery of formal bourgeois democracy. On the contrary, they are infinitely more democratic.

Despite all their strenuous attempts to cast doubt on the legitimacy of these referendums, even the BBC could not deny that the overwhelming majority of the people of these provinces enthusiastically supported a “yes” vote. Sarah Rainsford, from BBC News in Donetsk, writes: “I saw many people turn out to take part in this poll, and heard a lot of anger with the government in Kiev. I only saw one paper ticked ‘no’ in the see-through ballot box.”

In the first round of voting voters were asked whether they supported self-rule. A second round of voting is planned in a week's time, asking whether people support joining Russia. It is very clear that control of this region has now completely slipped out of the hands of the politicians in Kiev. People in eastern Ukraine are saying they will boycott the presidential elections which the Kiev government plans to hold on 25 May. Thus, two mutually hostile centres of power are emerging in Ukraine, which increasingly threatens the unity of the country.

Ukraine's interim President Oleksandr Turchynov told Ukraine’s parliament that “the farce that terrorist separatists call a referendum is nothing more than propaganda to cover up murders, kidnappings, violence and other serious crimes”.

Murders, kidnappings, violence and other serious crimes have certainly been committed in plenty during the recent months – mostly perpetrated by the National Guard and other fascist and criminal elements with the connivance of the government. Fascist gangs have been beating up and murdering Communists and trade unionists with complete impunity and ransacking trade union and left party offices. This fascist scum burned over 40 people alive when they attacked the trade union building in Odessa, and shot and beat to death people who tried to escape from the flames. Yet none have been punished for this atrocity.

The people of the eastern Ukraine correctly see this as a direct threat to themselves. Their actions are of a defensive character. The call for separation is merely a response to the aggressions and threats emanating from Kiev and to the actual violence and murders perpetrated by its agents against the populace.

The EU and US immediately denounced the polls as illegal. On the other hand, Russia has called for the implementation of the result of the referendums. In a brief statement, the Kremlin described the referendums as “the will of the people” and noted the “high turnout”. Russian Foreign Minister, Sergei Lavrov stated: “We respect the will of the population of the Donetsk and Luhansk regions”.

Only last week Putin was asking the people in the eastern Ukraine to postpone their referendum. Yet now Moscow is insisting that the result be respected. What is Russia’s game?

Russia is estimated to have some 40,000 troops near the border with Ukraine. Yet, despite all the hysterical propaganda in the west about an alleged Russian invasion, it has made no attempt to move them across the border. Moreover despite the claims in the western media about the presence of Russian professional soldiers in unmarked uniforms in eastern Ukraine, there is not the slightest scrap of evidence to show that Russia has provided any military assistance to the rebels whatsoever. In fact, some rebel spokesmen have complained bitterly about the lack of such support.

Moscow says that it has pulled back its troops from the border, although Nato says it has seen no sign of this. It seems highly unlikely that Putin intends to invade or occupy Ukraine, but he does not completely control the march of events.

The Russians are watching the situation closely. They have denounced “attempts to disrupt the votes, with the use of force, including the use of heavy weapons, against civilians”. If things degenerate further and there are serious civilian casualties, he will have no alternative but to send in the army. Such a prospect is concentrating the minds of politicians in western capitals marvellously.

Prospects for a dialogue?

In Brussels, EU foreign ministers have expanded sanctions imposed “as a result of Russia’s actions in Ukraine”. These include travel bans and asset freezes. Two Crimean companies and 13 individuals have been added to the sanctions list. The names are supposed to be announced officially within the next 24 hours. We shall see. EU ministers are said to be considering a broader package of sanctions against the Russian economy. However, such measures do not make much of an impression on the men in the Kremlin.

Moscow’s attitude towards the west is hardening. Sergei Lavrov said there were no plans to hold fresh international talks on the crisis. He accused the west of an “information blockade” over events in Ukraine and of “shameless lies”. This is absolutely true.

German Foreign Minister Frank-Walter Steinmeier is to travel to Kiev this week to promote “dialogue” between the different parties.

Suddenly, everyone is talking about the need of a dialogue and a peaceful solution. The main reason for this sudden conversion to “pacifism” is that all the attempts by the Kiev government to impose a military solution have failed miserably. The bloody raids carried out recently by the National Guard, composed mainly of fascists, thugs and criminals, which were intended to intimidate the population of eastern Ukraine, have had precisely the opposite effect. They have roused the fury of the population who have expressed their disgust in the overwhelming vote for separation last Sunday.

Faced with a de facto partition of the Ukraine, the Americans and Europeans have been compelled to disregard the indignant protest of the Kiev government and look for a compromise with Moscow.

For its part, Russia has called for dialogue between the rebels and Kiev with the participation of the Organisation for Security and Co-operation in Europe. Putin is playing his cards carefully. By insisting that the rebels in the eastern provinces must form part of any negotiated settlement, he is putting the Kiev government in an impossible position, and therefore making them responsible for a future breakdown in negotiations. Kiev has already indicated that it is not prepared to negotiate with “armed rebels”. In the end, however, it may have no choice in the matter.

Moscow has repeatedly suggested that Ukraine should become a federation, in which each region has greater political independence from the capital, including in economic, foreign and cultural policy. However, these regions on their own would be too small to constitute viable independent states. They must end up either by integration with Russia or by remaining part of Ukraine. But the latter option would only be possible on the basis of a federal state with ample autonomy for the regions. This is what Russia is angling for. That would put a stop to all attempts to integrate with the European Union and NATO. It would leave Russia with an even greater control over Ukraine than it had before. However unpalatable this may be for the Kiev government and its imperialist backers, this may be the best alternative open to them.

The cynical intrigues of the imperialists have brought about a crisis that threatens the destruction of the Ukrainian nation. The nationalist fanatics in Kiev have contributed powerfully in the drive to push Ukraine over the abyss. Civil war still remains a possibility. The only alternative to this nightmare scenario is the united action of the working class to fight the forces of fascism and reaction, overthrow the oligarchy (both the Russian and Ukrainian variety) and establish a regime of democratic workers’ power. Only the victory of socialism can guarantee a future of freedom and prosperity for the people of the Ukraine. All other roads lead to disaster.