Details
In Defence of Marxism
05 February 2006

Cuba
Share
Tweet
The Spanish Frederick Engels Foundation, after last year’s successful intervention, is once more at the Havana Book Fair, which opened over the weekend. Last year there was great interest in Trotsky’s works. This year the intervention will have an even higher profile with Alan Woods speaking at the fair, launching the Cuban edition of Reason In Revolt. He will also speak at several other meetings. 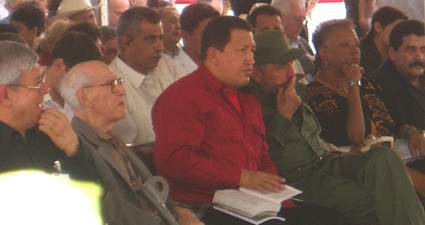 Hugo Chavez and Fidel Castro - Picture taken by Marxist.com
On Saturday, February 4th, the 15th edition of the Havana International Book Fair opened its doors to the avid Cuban public. Thousands had gathered at all entry gates waiting for the official opening, which had been delayed to allow Venezuelan president Hugo Chavez to attend the opening ceremony on February 3rd, representing Venezuela, the guest country of this year’s Book Fair.

Once the doors opened, people literally ran to the stands where all sorts of books were being sold, in a rush that can only be compared to that of the sales in Harrods (London). These were the first thousands of the hundreds of thousands that will pass through the Havana book fair. From being an event that took place only in Havana, the fair has developed into a nationwide event, and when the main fair closes in the capital, it will then move to another 33 different cities.

For the second year running, the Frederick Engels Foundation (FFE, Fundación Federico Engels), the main Marxist publishing house in Spain, has booked a stand. On its shelves one can find the classics of Marxism, Marx, Engels, Lenin, Trotsky, Luxemburg, Preobrazhensky, etc, and modern works of Marxist analysis on Venezuela, the Cuban revolution, etc. As was the case last year, works by Trotsky (especially Revolution Betrayed and Permanent Revolution), and anything related to an explanation of the reasons for the fall of Stalinism in the Soviet Union, generate the greatest interest amongst those who visit the FFE stand. Many commented last year that they had heard of Trotsky (mainly negative appraisals) but had never had the opportunity to actually read his works and judge for themselves.

Once again, the FFE in being present in Havana, is defying the boycott by the Spanish Publishers’ Association, which has consistently refused to participate in the Havana Book Fair. The FFE issued a public statement denouncing this hypocritical position, which received an echo in the Cuban media, including the island’s news agency Prensa Latina. 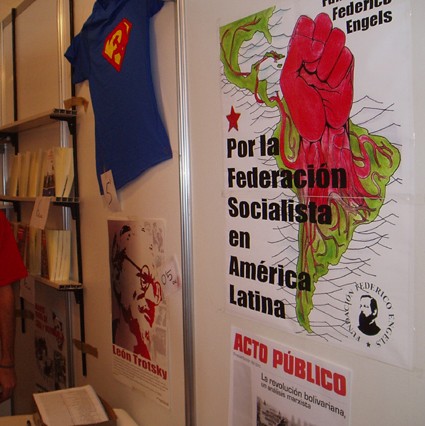 This year the Engels Foundation is promoting two of its new titles. One is a collection of Alan Woods’ articles on the Venezuelan revolution under the title “Bolivarian Revolution – a Marxist analysis” [the Spanish translation of The Venezuelan Revolution]. The other is a collection of Celia Hart’s articles, published for the first time in a volume called “Revolutionary Notebook – Cuba, Venezuela and international socialism”. This book includes her articles starting with her first one, “The flag of Coyoacán” written in December 2003, in which for the first time she defended the need to reclaim the ideas of Leon Trotsky and particularly the need to struggle for world socialism. The book ends with her appraisal of Fidel’s speech at the University of Havana in November, “Deepening the socialist revolution: the only way to save it”.

Celia Hart’s articles have undoubtedly had an important impact on the debates in Cuba about the future of its revolution, and have been discussed by communist militants in many countries around the world. Now for the first time they will be available to the Cuban public in printed form in one single volume. The book includes a foreword by Alan Woods and a short political biography of Celia written by herself.

Also important is the launch of the Cuban edition of “Reason in Revolt”, published by “Ciencias Sociales”. This book by Alan Woods and Ted Grant, a defence of the validity of the ideas of Marxism in the light of modern science, will be presented to the Cuban public at a number of meetings at which Alan will be present. The first will be at the Havana Book Fair itself, where the book will be officially launched at a meeting with Adán Chávez, the brother of the Venezuelan president, a revolutionary and a physicist and Venezuelan ambassador to Cuba. 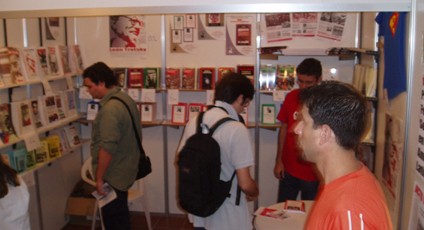 Cuba’s foremost Marxist intellectual, Dr Jorge Luís Acanda, will also launch the book at a meeting aimed at students of the Havana University. Alan Woods’ visit has generated quite a lot of interest and he has also been invited to speak at a meeting with researchers at the European Studies Centre in Havana.