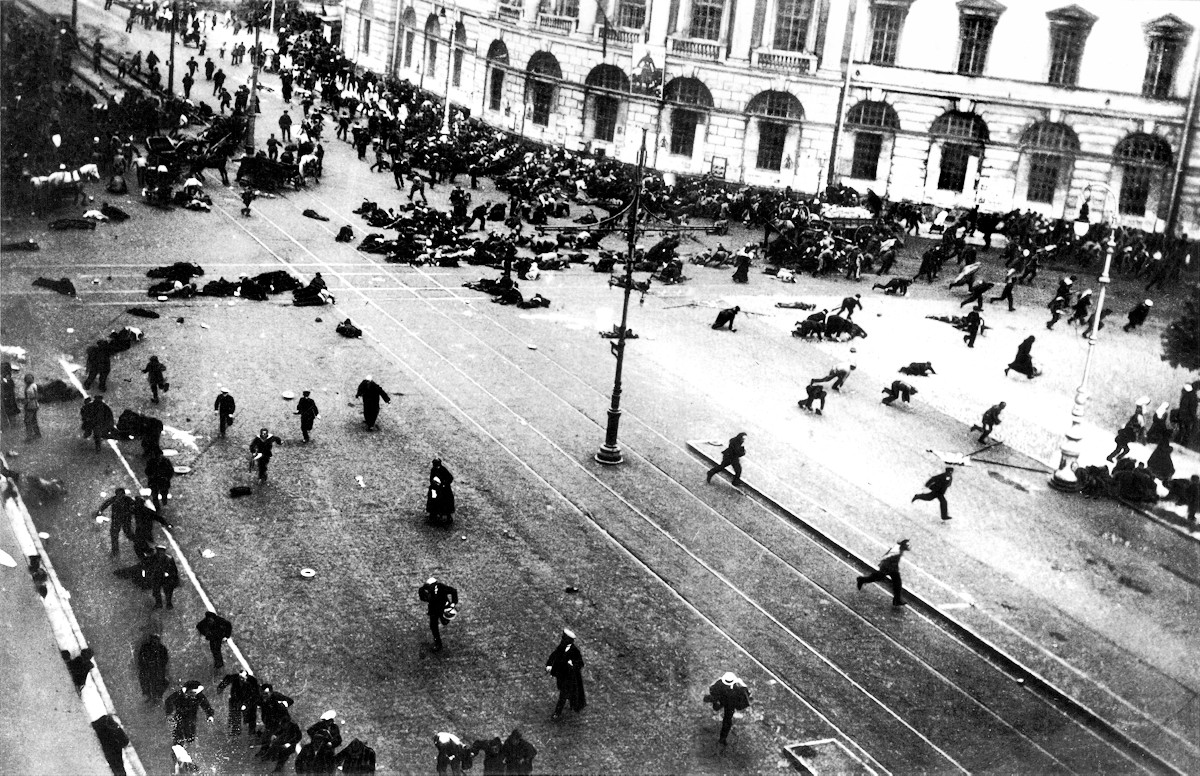 From the June Days of the Revolution it became clear that the Bolsheviks had won over a decisive section of workers and soldiers in the Russian capital Petrograd. They also commanded considerable support in Moscow, the provinces and even among soldiers on the front.

“What was to become ripe two or three months later is still immature in July, and a premature seizure of power at that time might have been fatal. Lenin realised this before everybody else.” (Grigory Zinoviev, Lenin: Speech to the Petrograd Soviet)

The more advanced layers of the working class were already convinced that the governing coalition between bourgeois and reformist parties – which in any case was brought down by Cadet Ministers at the beginning of July – had nothing to offer them. These layers were determined that the Bolshevik slogan “All Power to the Soviets” should be implemented, the only way that any of their demands could be satisfied. The problem was, the Menshevik-SR majority at the head of the Soviet had no intention of taking power, much less of being fully accountable to revolutionary organisations of workers and soldiers.

As tensions were reaching boiling point in Petrograd, the Coalition Government launched the disastrous 1st July Offensive against the German army. Far from achieving success against the Germans which could have provided impetus for a “patriotic” offensive against the mood at home, many divisions of the army refused even to participate in the attack. Heavy Russian losses were belatedly reported from the front.

The outrage generated by the offensive provided the spark for the vanguard of soldiers and workers in Petrograd to come out onto the streets and demand Soviet rule. The 1st Machine Gun Regiment stationed in the industrial working-class district of Vyborg, which one French journalist described at the time as belonging “wholly to the Bolsheviks”, was the first to raise the idea of an armed demonstration. Other regiments and factory committees quickly followed and the Bolshevik leadership themselves were soon confronted with the vanguard of the Russian revolutionary class demanding their support.

The Bolshevik leaders naturally supported the motivations of the soldiers and workers for such actions, but were very concerned about the demonstration itself. While taking up arms and marching on the Taurid Palace housing the Soviet Executive might have expressed the will of the Petrograd vanguard, it would not have had the support of the Russian masses in general, and key divisions of the army in particular, at that stage. Such a movement risked drowning the key layer of the Russian proletariat in blood, and with it the entire Revolution.

Bolshevik agitators moved urgently to restrain the advanced workers and soldiers from running too far ahead of their class, headlong towards a potential catastrophe. This would not prevent the party from taking all of the blame for instigating the July Days as an attempted power-grab in the bourgeois and petty-bourgeois propaganda that followed. Nonetheless the vanguard in Petrograd (and Kronstadt) could not be restrained. The Bolsheviks reluctantly took a decision late on 3rd July (Old Calendar) to lead the demonstration and ensure that it was carried through peacefully in an organised fashion. In doing so, they averted what could have been the death knell of the Russian Revolution.

This ultimately fruitless expression of anger from the Petrograd masses dispersed after two days, with minimal casualties. But the movement did lay bare the existential threat posed by the workers and soldiers both to the Russian bourgeoisie and to the government itself. It ushered in a period of counter-revolution which forced the Bolshevik Party into clandestine activity once again.

The selection of texts below covers the background, events and consequences of the July Days. Next, we will turn our attention to one of those consequences – the Kornilov putsch in late August. For more reading on the Russian Revolution, consult our general reading guide here

From July to September: Revolution and Counter-Revolution, Terry McPartlan

This introductory article deals with the build-up to the July Days, the events of the period itself and what followed, including the violent counter-revolutionary wave against the Bolsheviks.

The History of the Russian Revolution Volume 2: Chapter 24, Leon Trotsky

The opening chapter of Trotsky’s History Volume 2 explains the events and the mood among Petrograd workers and soldiers which prepared the ground for the July Days.

History of the Russian Revolution to Brest-Litovsk Part One: The Offensive of July 1st , Leon Trotsky

This section of the first part of Trotsky’s 1918 pamphlet gives a brief summary the events that led to the July Days.

A Contradictory Stand, V I Lenin

Lenin reports at the end of the June Congress on the paradoxical position of the reformists at once speaking as though in a position of power and yet refusing to actually take power.

On the eve of the offensive, Trotsky exposes the coalition government and the reformists in general for their role in the mindless slaughter of Russian soldiers in the war.

Trotsky gives an on-the-spot analysis of what is behind the events of July 1917.

The History of the Russian Revolution Volume 2: Chapters 25 | Leon Trotsky

Here Trotsky describes how the demonstration itself unfolded, with invaluable insight as a key participant in the events.

History of the Russian Revolution to Brest-Litovsk Part One: The July Days, Leon Trotsky

Trotsky covers the two July Days in brief, marking them out retrospectively as a turning point in the Revolution.

The Left-Menshevik Sukhanov gives his own view of the July Days from within the walls of the Taurid Palace.

Here Alan Woods covers the build-up to the events of the July Days making use of a wealth of source material.

A Balance Sheet of the Movement

A Disorderly Revolution, V I Lenin

Lenin explains the contradictions in the situation which both caused the July Days and would later cause an ebb in the movement leading on from them.

The History of the Russian Revolution Volume 2: Chapter 26, Leon Trotsky

Trotsky takes a chapter of his magnum opus to discuss whether the Bolsheviks could or should have actually taken power in the July Days.

Lenin: A Speech to the Petrograd Soviet: The July Days, Grigory Zinoviev

This section of Zinoviev’s famous speech concentrates specifically on the question of taking power during the July Days. Zinoviev contrasts Lenin’s prescient position of restraining the advanced workers in July with his insistence on a revolutionary insurrection in September and October.

History of the Russian Revolution to Brest-Litovsk Part One: After the July Days | Leon Trotsky

This very short section in Trotsky’s pamphlet outlines the immediate implications of the July Days.

Counter-Revolution in the Ascendancy

The History of the Russian Revolution Volume 2: Chapter 27, Leon Trotsky

This chapter covers the attacks on the Bolsheviks which immediately followed the July Days, opening a period of reaction in Russia.

On Slogans, V I Lenin

Lenin discusses the necessary shift in tactics the Bolsheviks would have to make when appealing to workers and soldiers following the July Days.

These chapters of Trotsky’s autobiography discuss the slanders against the Bolsheviks from a personal point of view, including the effects they – along with his imprisonment – had on his family.

The Autobiography of a Sexually Emancipated Communist Woman: The Years of Revolution, Alexandra Kollontai

After describing her earlier activity upon arriving in Petrograd soon after Lenin, Kollontai goes on to recount her arrest, imprisonment and the suppression of the Bolsheviks following the July Days.

Where Is State Power and Where Is Counter-Revolution?, V I Lenin

In this article Lenin implicates members of the government, Soviet Executive and army officers in the growing counter-revolution.

The Beginning of Bonapartism, V I Lenin

Here Lenin characterises the counter-revolution, demonstrating a keen understanding of Marx’s writings on the subject.

Nikolai Sukhanov gives an eye-witness overview of the July period of reaction in Petrograd.

Bolshevism: The Road to Revolution: Part 6 Section 4 – After the July Events and Lenin Changes His Mind, Alan Woods

These sections of Bolshevism detail the counter-revolutionary repression against both the Bolshevik Party and vanguard of workers and soldiers. The second part explores Lenin’s worries about his own safety and the future of the revolution in the July-August period.

The Question of Bolshevik Leaders Appearing in Court, V I Lenin

Here Lenin discusses the tactical question of whether to stand trial as a revolutionary during a period of violent counter-revolutionary repression.

What Next? After the July Days: Chapters 1-2, Leon Trotsky

Written in early August 1917, these two chapters outline the swing towards reaction in Russia in the build-up to the Moscow Conference. It is striking just how similar Trotsky’s analysis is to Lenin’s by this point.