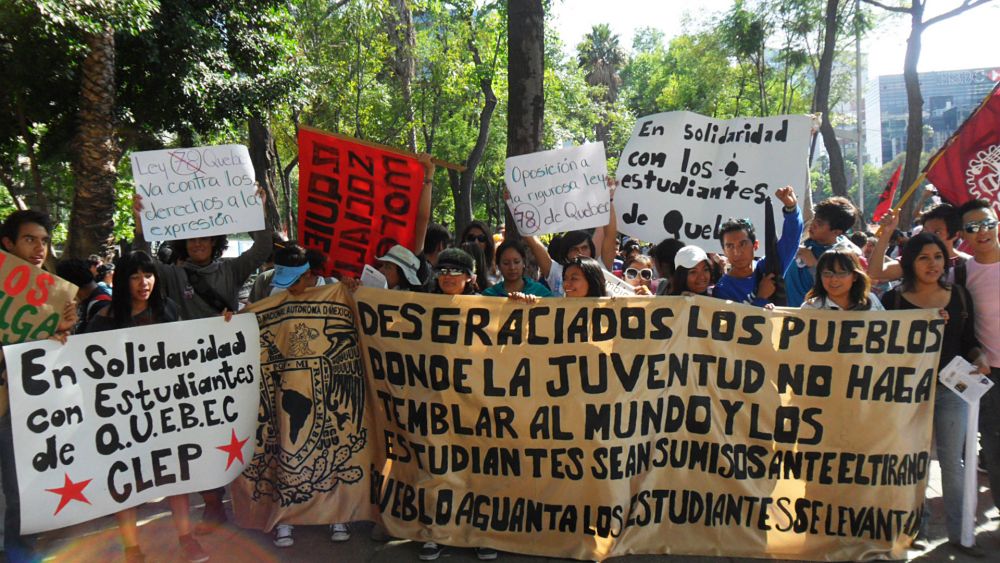 The Quebec student movement has not just caught the imagination of youth and workers in Quebec and the rest of Canada — the movement is gaining support all over the world.  Today, we publish a few reports and pictures from supporters of the International Marxist Tendency in different countries who have rallied in solidarity with striking Quebec students.

On Wednesday 30th May, the Defend the Right to Protest campaign organized a demonstration in London in solidarity with the militant student movement in Quebec.

The demonstration started outside Canada House, headquarters of the High Commission of Canada in the UK. Around 100 or more activists came with trade union banners and placards, and several speeches were given from the megaphone. The president of the University of London Student Union, the biggest student union in Europe, spoke and expressed not only solidarity with their struggle but also the need to emulate the militancy of the Quebecois student.

We then marched to Quebec House, basically the Quebec embassy in London. Brilliantly this march took us through the streets of Mayfair, possibly the most exclusive and expensive area of any city in the world. The looks on the faces of the businessmen in their gentlemen's clubs as this unruly mob marched past, chanting for a general strike and for free education, was priceless.

Once outside the embassy a few Quebecois workers and some Anglophone Canadian students spoke, all of whom were extremely enthused by the large (and loud) turnout.

Finally we march to the Canadian Embassy proper, over the entrance of which a banner was draped. More speeches were given, stressing the similarity between the methods of cutting education and repressing student struggle in both Quebec and the UK, and in the massive response the students have given in both countries.

A member from the British section of the IMT spoke from the megaphone, and said that although both the UK student movement of 2010-11, and the movement in Quebec now, have much in common, it is clear that the movement in Quebec is far stronger, more militant and better organized. We need to learn from this, and the key reason for the strength of the movement in Quebec is the leading role of the student union, which had coordinated the struggle and balloted for strike action, something the student leaders in the UK never came close to. Therefore the task of students in the UK and in Anglophone Canada, must be to fight for militant, fighting and socialist policies in the mass student unions. This is the only alternative to the cuts in education, which are introduced everywhere as a result of the crisis of capitalism engulfing the world.

Letter of solidarity with Quebec students, from GPA-DJP union in Austria

In the last few months we saw and still see in Austria many attempts by the government and also the universities to reintroduce student fees. Often it seemed, that resistance against that would be futile: a coalition of government, mass media, “education experts”, and “economic experts” stands against our interests. They all tell us that not only student fees, but also austerity measures at the expense of the working people are “without alternative” and must be accepted.

With joy we discover, that you, the students of Québec, don´t believe that propaganda and  started to resist such injustice. And not only that, with your enormous endurance, determination, and willpower, your struggle can serve as an example for students and workers all over the world how to resist the attacks of the ruling class.

In contrast we observe with contempt the attempts of the government to break your determined struggle through violence and the confinement of the most elemental rights, like Bill 78 does. But what should have been a proof of power is in reality a proof of the weakness of a government which can enforce its decisions in the interest of the rich only trough the use of violence.

- Students in the GPA-DJP (Union of Salaried Private Sector Employees and of Printers, Journalists and Paper Workers) (www.jugend.gpa-djp.at)

Below are pictures from Mexican students, rallying in support of the Quebec student movement.  As well, three student unions and organizations in Mexico have passed motions of support for the “Open Letter to the Canadian Federation of Students”.  The organizations are: 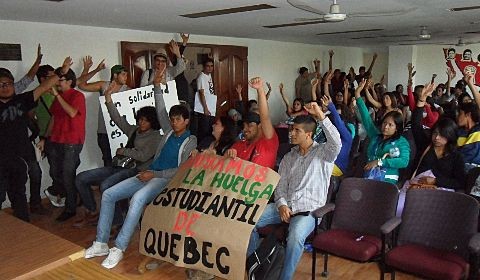