In Montreal, Quebec, the Marxists participated in a solidarity march on Saturday the 15th which had been called before the dictator fled the country. Called to protest the clampdown against the demonstrations, the march became a celebration of the cowardly flight of Ben Ali, and a protest to demand that his son-in-law not be allowed to take up residence in his $2.5 million mansion in a rich neighbourhood of Montreal. 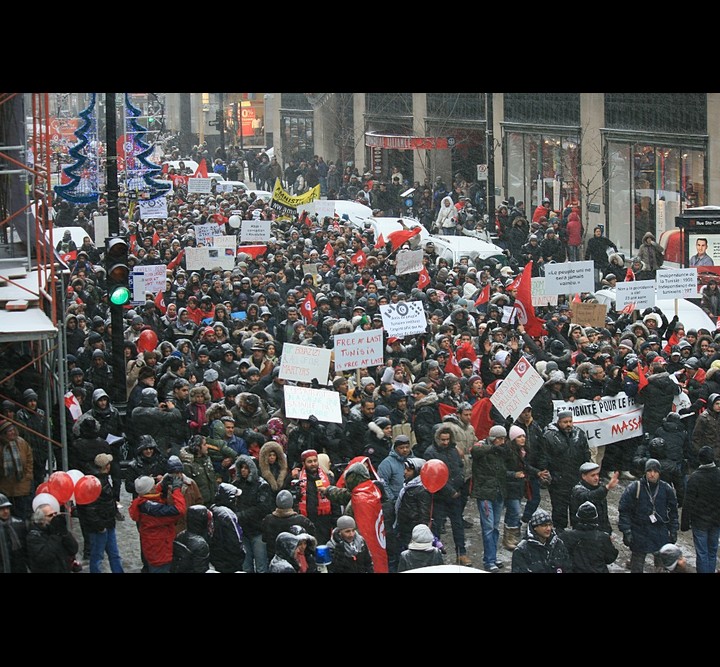 The march drew a crowd of more than 6000, a massive number considering Montreal’s Tunisian community numbers 7000. Setting out from Dorchester square, the march took over the main artery in downtown, St. Catherine Street, with the crowd forced to take over the sidewalks as they squeezed down the busy shopping quarter.

Throughout the protest, chants went up of "a people's trial, for the terrorist gang!", "Tunisia, Tunisia, is free, is free” and “The gang, out! out!", "Clear out! clear out! clear out!". The crowd sang the national anthem over and over, which is ironically an old revolutionary poem whose words have come true:

O defenders of the Nation, hasten to the meeting of glory!
We are ready to die, if it is necessary, die so that our country will live!
This our blood in our veins urges us.
There is nobody in our country who refuses to be in the ranks of its soldiers!
We are bound together by our oath of fidelity.
We will live on her soil in dignity
or we will die, for her, in glory.
Be master of your destiny, oh my country, and be happy!
Because it is not worth living without being master of your sovereignty
My boiling blood and all the wealth I possess,
I am ready to sacrifice it for my country and my people.
Glory to you, Tunisia! Greatness of your people, remain forever proud!
Look at your children launching out, such as lions,
In assault on the enemy on the day of the battle
Our heritage, among the nations, is the strength of our arms,
the arms as hard as the rock of these imposing buildings
And which hold high the banner of the country.
This banner makes us proud, and it is proud to be carried by us.
Arms that bring us towards the highest tops
Of glory and greatness
And which guarantee the realisation of our ambitions
Which will bring misfortune to the enemies of our Fatherland
But who are peaceful with all those who want peace.
When the people want to live, destiny must surely respond
Darkness will disappear, chains will certainly break! 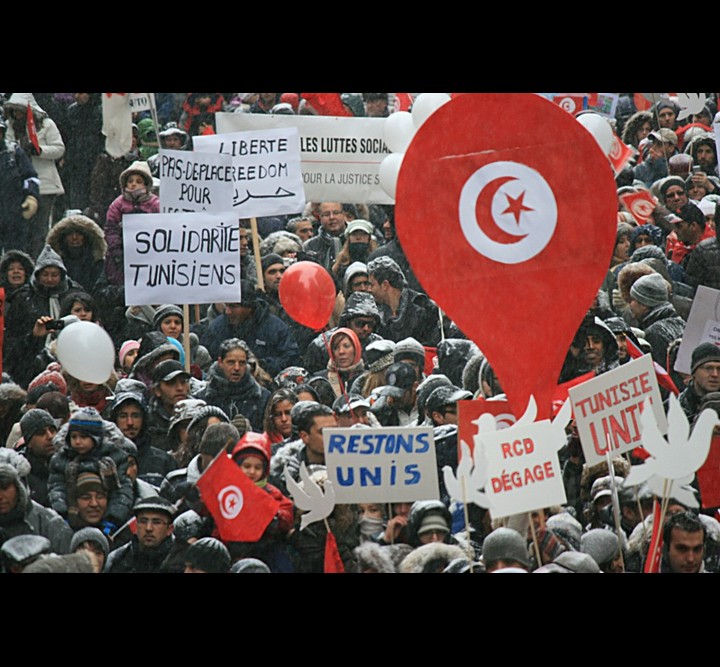 The march ended in front of the Tunisian consulate downtown, where it became a mass public meeting. People crushed up against the pickup truck with the speakers and the microphone and scrambled to stand up and speak. A child of 6 led the crowd in a chant against the dictator, screaming at the top of his voice and tearing up by the end. The mood was electric, and the effect the events had on the consciousness of the participants was evident. At one point, the organizers seemed to lose control of the situation. Their focus was on "human rights and civil liberties". One of their speakers even said this revolution was not about bread and jobs, but liberty, seemingly forgetting that the youth who rioted for food cannot eat liberty. They attempted to toe the line of "coalition of national unity", but the speakers gave speeches which were increasingly radical, finally culminating in one speaker being cut off by the organizers when he began calling for breaking down the borders imposed by imperialism on the Arab world in 1917. They forcefully took the microphone from his hand mid-sentence, but had to hand it back several times in a tug of war as the crowd chanted to let him speak and pushed against the truck in waves of anger yelling out "what freedom have we fought for? Let him speak!" One speaker following him called for the Tunisian people to form popular courts to try the murderers, and not be fooled, not allow power to slip from their hands, but form a government of the revolutionary masses, and got a raucous cheer from the crowd.

It is important to remember that while those who came to this demonstration were there to support the Tunisian revolution, they live and work here in Quebec. And so we must underline the participation of the left party Quebec Solidaire on this march, whose Arabic flyers carried the slogan: "against poverty and repression, revolution!". Francoise David, a leader of this party, received a loud welcome when she addressed the crowd at the beginning of the protest, with chants of "solidaire! solidaire!" as she praised the Tunisian people for "showing us the way forward". This is a sign of what kind of effect the revolution at home can have on the Tunisian community here, and how it can influence them in their coming battles to defend their own standards of living against attacks by the Quebecois bourgeois.

Below are some videos of the protest. The first particularly shows the size of the demonstration.

A gallery of the demonstration: