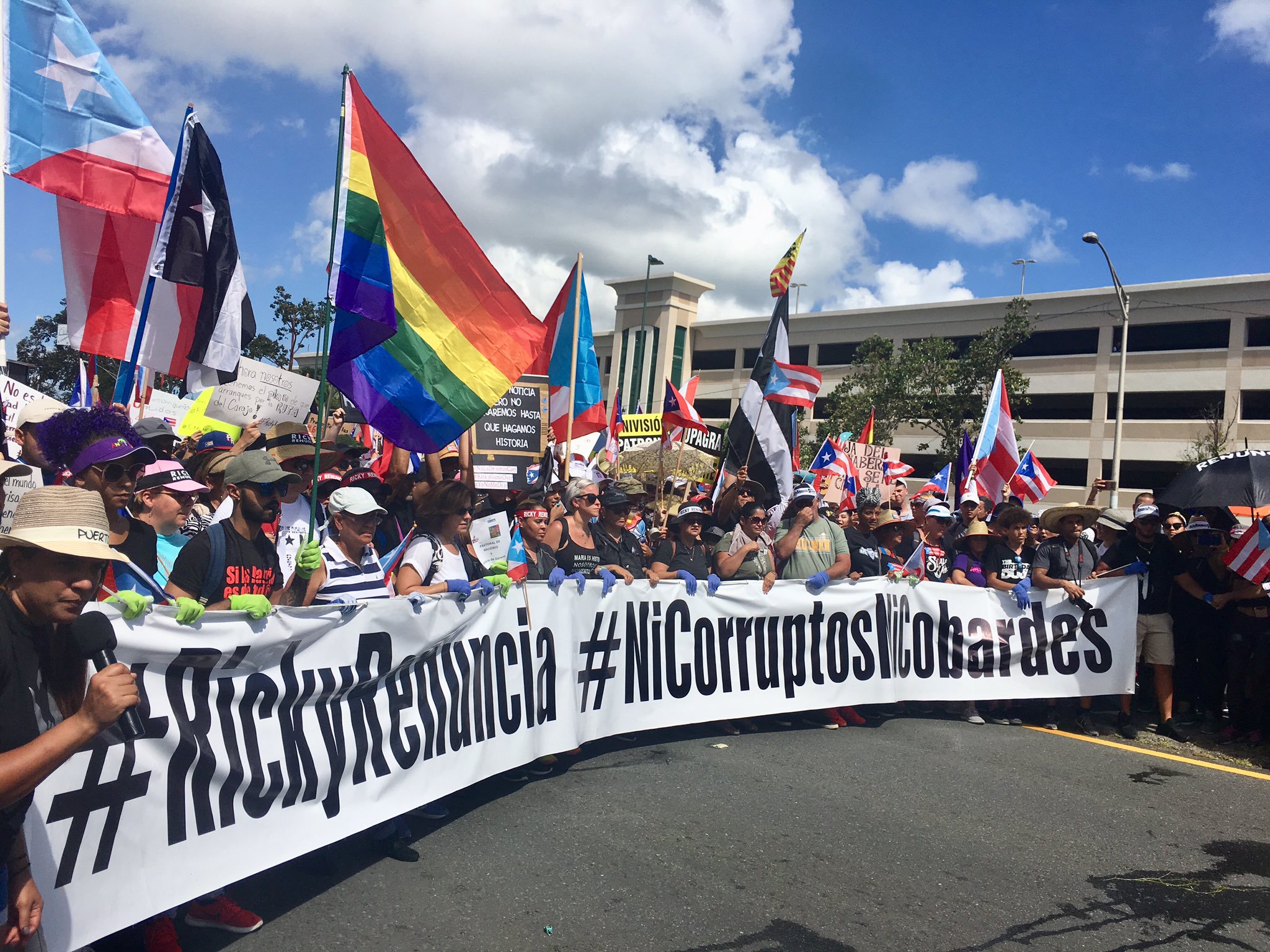 Today marks the tenth consecutive day of protests calling for the resignation of Puerto Rico’s Governor, Ricardo Rosselló. Hundreds of thousands have filled the streets of San Juan and surrounded La Fortaleza, the governor’s mansion. The spark for the protests was a leaked Telegram chat that revealed large-scale government corruption as well as the most abhorrent language and disgusting jokes, revealing the complete disdain of the government towards the people of Puerto Rico.

The protests reached a peak on Wednesday last week as 500,000 demonstrators occupied the streets for the entire day. Shortly before midnight, police issued a warning to the crowd to disperse and minutes later began firing on them with rubber bullets and tear gas. This display of aggression has not deterred the protesters however, who continue to come out in droves chanting: “¡Ricky renuncia!” (Ricky, resign!), “¡no vamos a parar hasta verle renunciar!” (we will not stop until we see him resign!), “¡Si Ricky no se va, le vamos a sacar!” (If Ricky does not go, we will kick him out!). A nationwide demonstration has been planned for today, by activists and the trade union movement, to force the resignation of the hated governor.

[For more background on the situation in Puerto Rico, read The Bankruptcy of Puerto Rican Capitalism]

The scandal has revealed the full extent of the corruption and negligence of Rosselló and his clique of close associates. The leak disclosed chats between Rosselló, his cabinet ministers, marketing mogul Edwin Miranda and Rosselló’s former campaign manager Elías Sánchez, regularly sharing privileged information to contractors bidding for government contracts in order to benefit private clients in exchange for commissions. Sánchez charged 25 percent commission for this information and is in control of all the biggest state contracts (despite not being in government). Rosselló also misappropriated public funds to benefit his political party, the New Progressive Party (PNP). Edwin Miranda’s companies have received $50 million from 22 government agencies through direct contracts and Miranda has also reportedly pressured other companies to go through him in order to obtain government contracts. These are the highlights of the deep level of corruption and clientelism of the governor.

To further incense the people of Puerto Rico, the 889 pages of Telegram chats include the participants’ derogatory, sexist, misogynist and homophobic jokes insulting journalists and politicians. They joked about shooting the Mayor of San Juan, Carmen Yulín-Cruz, and worse still, the group joked about those who died in Hurricane Maria (which hit the island in September 2017). Climate activist Amira Odeh was disgusted that Rosselló had “the audacity to joke about the lives of those lost, while doing nothing to ensure our long-term recovery.” The complete lack of respect for the people they are meant to be protecting from natural disasters is displayed loud and clear in these messages and has brought the people out onto the streets in their rage, disgust and pent-up frustration.

In addition to the chat, it has also been discovered that $15.5 million of federal funds allocated for health and education were illicitly diverted, and the Head of Education, Julia Keleher—who has closed down 432 public schools over the past two years—along with Ángela Ávila-Marrero—Head of Puerto Rico’s Health Insurance Administration—have been arrested by the FBI on multiple counts of money-laundering and fraud.

These latest scandals were simply the last straw for the people of Puerto Rico who have not only suffered from centuries of corruption but also decades of severe austerity and public debt. In 2015, 41 percent of the population lived below the poverty line, as the former Governor Luis Fortuño froze public sector salaries, liquidated unused sick days and fired 17,000 public employees. On top of this, he increased the price of water, fuel and electricity, cut health benefits and pensions and raised the retirement age. In the same year, the government declared the public debt, which stood at $72 billion, to be unpayable. Since then, the Fiscal Oversight and Management Board (FOMB) was brought in to “restructure” the debt, ostensibly to pay it off. However, the FOMB has essentially been implementing austerity measures which has not reduced the debt. Instead, it is now estimated at $120 billion, further exacerbating the economic crisis and the plight of the people on the island.

Faced with the increasing pressure of the protests, Rosselló initially stated in a press conference that he had “not committed any illegal acts” and insisted that he would not resign. He declared that “it is possible to restore the trust [of the people]… and achieve reconciliation.” However, the pressure of the masses is clearly having an impact. Cracks are beginning to show in the government as Rosselló lacks support from his own party and the Telegram chat scandal has practically emptied his cabinet via resignations of those who have been implicated. Yesterday Rosselló changed his tune, declaring that he has stepped down as president of the ruling PNP and confirmed that he will not run for re-election in 2020.

This in itself marks the first victory of the protest. It is the first sign that the protest movement is having an impact and pressuring the state to concede to their demands. However, protesters know that removing Rosselló will not be enough to end corruption or even bring about minimal economic reforms to improve living conditions which have not recovered since the destruction caused by Hurricane Maria. The question of who will replace Rosselló until the next elections in 2020 will now be discussed behind closed doors within the PNP. But the protesters know that a new face will carry out the same austerity as their maligned predecessor.

Activist Odeh has called for a new model of government that has “human rights and right to safety respected without harmful austerity measures.” The only new model of government that can provide this solution and much more is a socialist one, based on democratic control by the workers of the commanding heights of the economy and transparent administration of the state to provide for everyone’s needs. Whilst capitalism destroys the planet and aggravates hurricanes, making them more frequent and powerful, the capitalists continue to ignore it. Their negligence and complete disregard for the well-being of the population, as revealed by the Telegram chats, is putting people’s lives at risk. A socialist government would rationally plan the economy to adequately prepare and defend against environmental hazards and provide much-needed universal health care and education.

The masses protesting on the streets must escalate the pressure on the regime by declaring an all-out general strike until Rosselló and his party overthrown. As Puerto Rico’s teachers have shown in the magnificent strikes of recent years, the power of the working class can paralyse the country and bring the government to its knees. Beyond this, the masses need a coordinated effort to bring about a complete clearing out of the ruling class and their political representatives in the PNP and the Popular Democratic Party (PPD), the other main ruling party.

A government of, by, and for the boricua working class, fighting to implement a socialist program that can meet the needs of the masses on the island would send shockwaves throughout the Caribbean and beyond. It would electrify the millions of Puerto Ricans living on the US mainland who are already carrying out solidarity protests, not to mention the organically connected labor movement and broader US working class.

A government of, by, and for the boricua working class, fighting to implement a socialist program that can meet the needs of the masses on the island would send shockwaves throughout the Caribbean and beyond. It would electrify the millions of Puerto Ricans living on the US mainland who are already carrying out solidarity protests, not to mention the organically connected labor movement and broader US working class. Puerto Ricans are US citizens and the fates of the island and the mainland are intricately intertwined—there is no solution within the limits of the island itself.

For an all-out general strike to clear out Ricky and his cronies!

No confidence in the PNP or PPD!

For a socialist workers’ government of Puerto Rico!