The programme was presided over by Chaudry Muhammad Yasin, President Capital Development Authority (CDA) Mazdoor Union CBA, while the central leader of the PTUDC, comrade Adam Pal was the chief Guest. Workers and activists started to gather in Abpara square, Islamabad. From there a rally was organized towards the meeting hall. The main demand of the rally was the approval by the Parliament of the Industrial Relation Act 2011 which would become void after 17 March and the Islamabad Federal Territory would be left with no Trade Union Laws. Different slogans were raised in the rally concerning the issues of the workers, such as price hikes, job security, health facilities and service structure. A mass meeting was held at the Abpara community centre with the title “Begging for rights is an insult – We must take them”.

Doctor Changez Malik from PTUDC Rawalpindi was the stage secretary. Yasir Irshad from PTUDC Kashmir delivered the opening speech. He explained the role played by the working class in society and its exploitation by the ruling capitalists. He spoke about the history of the labour movement in Pakistan and its ebbs and flows. He criticized the role of those labour leaders who had sold themselves along with the workers to the ruling class. He emphasized the need for workers’ unity and a joint struggle to end the capitalist system responsible for all the miseries. 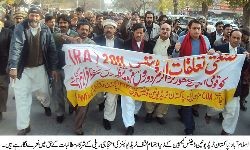 In his speech the chief guest comrade Adam Pal said that price hikes and unemployment have reached astronomical levels in the country and the state is taking away the few benefits that had been given to the workers. Thirty-eight thousand people are being pushed below the poverty line every day, but on the other hand the bourgeois mass media and ruling classes are imposing non-issues on the consciousness of the masses in order to distract them. Not a single problem faced by the working class in this region can be solved without destroying this system. The issues raised in the media have nothing to do with the workers and in fact they represent the internal conflicts of the ruling class for their own vested interests. The fundamental issues faced by the poor masses are food, clothing, shelter, health and education, which cannot be resolved within capitalism. While the ruling class has been attacking the workers relentlessly, the leaders of the working class share the responsibility. The corrupt and agent trade union leaders are helping the ruling class in its exploitation of the workers. The workers are becoming fed up with all this. The workers in Pakistan have challenged the property relations in the past and they will once again unite in a general strike and take power in their hands to form a workers’ state through a socialist revolution. Only the formation of a classless society can emancipate the workers and the poor. He said that workers have defeated the dark forces of reaction before and they will defeat them again, those forces who try to divide the workers in the name of race, colour and religion. Workers of India and other countries in the region will come forward to stand with their working class brothers and sisters in Pakistan in a fight for a socialist victory.

A resolution was passed with the following demands:

Report of Convention on Radio Pakistan