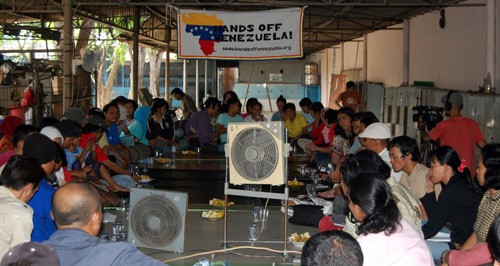 Jorge Martin, the International Secretary of Hands Off Venezuela, in November 2008 visited an occupied factory in Indonesia, PT Istana, a textile factory in North Jakarta. Here he explains what he saw and appeals for solidarity from workers around the world.

On November 11, 2008, we travelled to PT Istana, a textile factory in North Jakarta, Indonesia, to visit the workers who have occupied it and are running it under workers' control. They were very interested in learning about the movement of factory occupations in Latin America in general and in particular the experience in Venezuela. 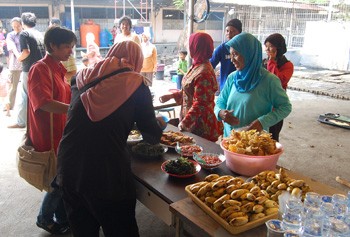 Workers offered the international delegation a meal, which they had cooked themselves in a corner of the factory yard.

When we arrived at the gates of the factory, we saw banners greeting us and the gates being guarded by the workers. At the top of the gates the banners from the different organisations involved in the occupation were flying high and proud: the PRP (Working Peoples' Association) and the FSBKU-KASBI (Federation of Karya Utama Union - Congress of Indonesian Union Alliance), which is a local federation of unions belonging to KASBI.

The workers present, overwhelmingly women (many wearing the traditional Islamic headscarf), were extremely pleased to receive support from an international delegation and were proud to show us what they had achieved through their struggle. First of all they offered us a meal, which they had cooked themselves in a corner of the factory yard and which we ate together in the building they use as an assembly hall. The food was excellent but the thing that struck us most was the mood of the workers; they were happy, proud, and lively. It was very different from the mood you would see in a normal factory. 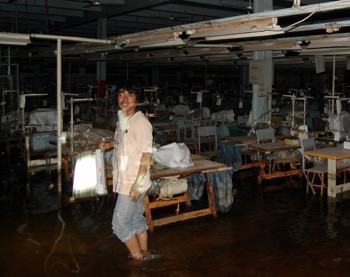 The factory had been affected by flooding. Since the company owners had cut off the electricity supply, the workers had not been able to use the pump to remove the water.

After eating we were shown around the factory premises. This was once a large textile factory employing more than 1,000 workers and producing textiles for big name Western brands (including GAP, Banana Republic, Victoria's Secrets, Adidas) and exporting to Australia, the US, India, Malaysia, Germany, etc. The first section of the factory we visited was where the workers had gathered a few of the machines and where they had managed to keep production going. The factory had been affected by flooding, which is recurrent in this part of Jakarta. However, since the company owners had cut off the electricity supply, the workers had not been able to use the pump to remove the water. This was a sad sight as hundreds of machines were lying idle in this massive warehouse with water knee-high. This is an example of the nature of capitalism: machines go unused while thousands of workers have no jobs.

On the first floor we saw another section where there were machines. The workers told us that once they set up a union and about 100 of them joined SBKU-KASBI, the bosses decided that they were dangerous and separated them from the rest of the workers! They were working here on the first floor, not in contact with the other 300 workers on the ground floor shop. The visit continued through the trimming area, the design area (where files were kept with the specifications of well known brands), the place where fabrics were kept and finally the directors' plush offices (now also flooded). In one of the offices we could see boxes of finished products ready to be exported to Germany.

After the visit, a mass meeting started with the presence of the workers and representatives of organisations of workers, students, alternative media, lawyers and other supporters of the occupation.

The spokespersons of the Occupied Factory Committee (Kompap) told us their story. The factory, previously known as CV Melody, was a successful and profitable textile factory. The problems started when the workers got organised, set up the SBKU union, and started demanding their rights. The company resorted to terrorist methods of intimidation against the union leaders, seizing their ID's, locking them up in a room, separating union workers from the rest. But none of this broke the union.

In 2007, the workers were asked to sign voluntary resignation forms, thus giving up their redundancy payment rights. Many of the workers were intimidated into signing them, but the 100 or so belonging to the union steadfastly refused and won their case in an industrial court. Finally, in July 2007, the company put up posters announcing the end of production and tried to lock the workers out. The workers fought back and found themselves occupying the premises. Initially they were just fighting for their redundancy money, but this quickly escalated into a struggle for their jobs once it became clear that the company was not prepared to pay. They received support from the PRP, KASBI, and other organisations.

The first months of the occupation were very hard. The boss used the security personnel to try to evict the workers by force. Once this failed, he sent hired thugs. But the 76 women workers and 2 male workers in the occupation resisted, they explained proudly. "We were all women, we only had two men, but we sent the thugs away", said Mosul, one of the Committee leaders. 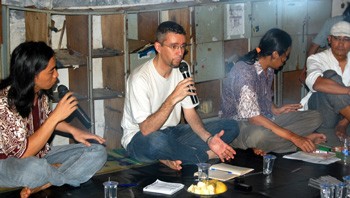 Jorge Martin speaking to the meeting with the presence of the workers and representatives of organisations of workers, students, alternative media, lawyers and other supporters of the occupation.

In January 2008, the company put pressure on the electricity company to cut off the power supply to the factory. This was a serious blow to the workers, since they became unable to use the machines, had no light, and could not pump water out of the premises during the floods. For a while they had to resort to using kerosene lamps. However, with help from supporters they managed to get a diesel power generator which now allows them to run the machines they were able to rescue from the flooded warehouse. At the same time, they are in negotiations with the union of the electricity workers (Serikat Pekerja PLN) to try to get reconnected to the power grid.

The Factory Committee runs on a democratic basis and responds to the mass assembly of the workers. It was very interesting to see the accounts of the committee in running the factory published on the board for all to see and inspect. The shifts the workers had to do in production and security were also announced on the board. The Kompap, they told us, is divided into commissions dealing with the legal battle, propaganda, production, administration, getting orders, education and development, etc.

During the occupation the workers learned about the movement of occupied factories in Latin America and watched both Naomi Klein's "The Take" about Argentina and HOV's "No Volveran" about Venezuela. This generated discussions which ended with the decision to start production under workers' control. They managed to get a contract from CTM and were looking for other contracts. They proudly showed us the finished products they were making.

The main thread running through their explanations was how they realised that the workers are strong, and how this was one of the main achievements of the occupation. "The workers should have power", said another of the occupation leaders. The Kompap had made a conscious effort to record all the aspects of the occupation so that this material could be used for the education of other workers. 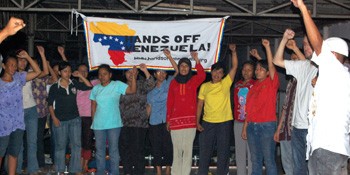 The meeting ended with a spirited singing of the Internationale with all the workers standing and raising their fists.

The discussion lasted for more than three hours and many issues were raised. The workers were keenly interested in learning about the practical aspects and the difficulties facing the factory occupations in Venezuela. They were pleasantly surprised to see that the way they had organised their committee was almost identical to that of workers in Latin America occupying factories.

We insisted on the importance of the step they had taken, not only in occupying the factory, but also in starting to produce without bosses. They had proven something very important: the bosses need the workers to run the factories, but the workers do not need the bosses! We discussed a lot of the detailed practical problems they faced and suggested possible solutions. However, we insisted that one cannot have socialism in one factory and their struggle should be seen as part of the wider struggle to transform society; something which they were very aware of.

The meeting ended with a spirited singing of the Internationale with all the workers standing and raising their fists. It was a moving moment. You could see in the workers' faces their sense of pride and achievement. They know that their struggle will not be easy and that they face many difficulties. However, what they have learnt in these few months will never be taken away from them.

Video: Singing of the Internationale