China
Share
Tweet
China has recently passed a law recognising the right to privately own the means of production. What is the significance of this and what lies behind it?

Lenin wrote the above lines two years after the Bolsheviks took power in Russia. His objective was to emphasize for the Bolshevik leadership and the advanced layers of the working class that while capitalism continued to dominate in the advanced countries, a workers' state would face the danger of capitalist restoration. In short, the struggle between private property and the nationalised property organized into an economic plan will continue as long as capitalism is not situated in an inferior position in the productive relations on a world scale.

The lessons of the process of capitalist restoration in the USSR as well as in the different deformed workers' states in Eastern Europe, Asia and Africa, are of extraordinary importance for the working class of the whole world. As Leon Trotsky explained in the mid-1930s, the triumph of the bureaucratic caste and the suppression of workers' democracy in the USSR constituted the greatest the danger to the gains of the revolution and prepared the way, in an historical period which was impossible to determine in advance, for the restoration of capitalism. Today, we can conclude that Trotsky's predictions have been realized: in all the countries, including China the counter-revolution has triumphed at the hands of the Stalinist bureaucracy. The idea of socialism in one country has proven its reactionary content in practice.

It is imperative that all revolutionaries understand that this is happening in China, learn from the experience and strengthen the struggle for genuine socialism. The Chinese road is not an option for socialism, and is a very serious warning. In fact, faced with this historic step-backwards, the gains of the Cuban revolution, despite its serious difficulties, continue to make this Caribbean island a pole of attraction for millions of workers and youth around the world. The advance of the socialist revolution in Latin America, with the masses in Venezuela on the front line, has meant an injection of morale and hope to struggle against those against those both inside and outside the island who are attempting to open the doors to capital. Cuba continues to resist and in Venezuela there exist excellent conditions for the transformation of society along socialist lines.

There is no socialism in China 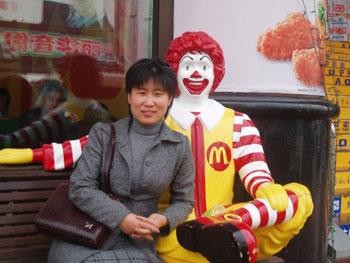 The legitimisation of private property, approved by 2,799 of the 3,000 deputies of the National Peoples' Congress in March, is nothing more than the reflection, in legal terms, of the culmination of capitalist restoration. As Marx wrote in 1875, right can never be higher than the economic structure of society and its cultural development conditioned thereby. Three decades after Deng Xiaoping initiated pro-capitalist reforms, the state monopoly of foreign trade and the predominance of the nationalised sectors in the economy have been destroyed. The basis of planning has been destroyed, which becomes unviable when the decisive enterprises organize their production in accordance with competition in a market regulated by capitalist supply and demand. At this time, according to the Federation of Industry and Commerce in China, 65% of GDP comes from private enterprise.

Despite this crushing material reality, the top leaders of the CP try to continue speaking in the name of socialism while legitimising private property or inviting capitalists to join the Party. There are even theoreticians outside China, who present themselves as part of the anti-capitalist camp and call themselves socialists, who give credibility to such an aberration. Such performances deserve a place of "honour" in the old and infamous Stalinist school of falsification.

Frederick Engels, in a text designed to popularise socialist ideas entitled The Principles of Communism, was asked:

"What will this new social order have to be like?"

To which Engels replied:

"Above all, it will have to take the control of industry and of all branches of production out of the hands of mutually competing individuals, and instead institute a system in which all these branches of production are operated by society as a whole - that is, for the common account, according to a common plan, and with the participation of all members of society...

"Private property must, therefore, be abolished and in its place must come the common utilization of all instruments of production and the distribution of all products according to common agreement - in a word, what is called the communal ownership of goods."

Later, Engels was asked "What will be the consequences of the ultimate disappearance of private property?", to which he responded:

"Big industry, freed from the pressure of private property, will undergo such an expansion that what we now see will seem as petty in comparison as manufacture seems when put beside the big industry of our own day. This development of industry will make available to society a sufficient mass of products to satisfy the needs of everyone...

"In this way, such an abundance of goods will be able to satisfy the needs of all its members. The division of society into different, mutually hostile classes will then become unnecessary. Indeed, it will be not only unnecessary but intolerable in the new social order."

Indeed, if the disappearance of private property and economic planning are the material basis around which a new society develops eradicating misery and exploitation, the resurgence of these is in turn the verification of a return to the old capitalist society characterized by class divisions, misery, inequality and the disregard for human life.

The current conditions of life in China demonstrate how the advance of private property and the market go invariably hand in hand with insulting privileges for a minority and dramatic reverses for the overwhelming majority. There is inequality between rich and poor, between the countryside and the city, between the different regions of the country. The extreme inequality is in short the dominant element of the false socialism the Chinese leadership offer us.

The effects of the restoration of capitalism in China have been devastating. According to figures of the World Bank, the 20/20 quotient (between the portion of national income of the richest 20% of households and the portion of the poorest 20%) rose from 6.5 in 1990 to 10.6 in 2001. China is the most unequal society in Asia: the quotient is approximately 5 in India and Indonesia and is less than 10 in the Philippines. The negative evolution is confirmed by 10/10 quotient figures: between 1990 and 2001 the portion of national income of the richest 10% of households went from 24.6% to 33.1%. These figures allow us to understand why China is the greatest market in Asia for luxury goods, for example Ferrari, while more than 170 million of its citizens live on less than one dollar a day.

To live in the countryside is practically synonymous with poverty: the almost 900 million people living in rural areas, approximately 60% of the population, earn a third of those that live in the urban areas. But this figure does not mean that the urban population enjoys a better situation. It is clear that a middle class is developing in the cities, the social base of the capitalist counter-revolution, yet the majority of workers live in extremely difficult conditions.

In the cities, the reversal of nationalised property has meant the massive destruction of jobs in the state sector. Despite the shortage of official data, it has been made public that between 1995 and 1999 15 million jobs in this sector were axed, while numerous "specialists", economic consultants and western bank study offices, indicate that in the next few years some 100 million jobs will be lost in the nationalised industries. In parallel, millions of workers have been contracted into thousands of industries as a result of foreign investment in conditions of maximum exploitation: 12 hour working days are normal in the toy and textile industries, along with miserable salaries and without any sort of trade union rights whatsoever. An important part of the workers live on company premises and are forced to pay for their accommodation and food.

The dismantling of the public health service, one of the most important conquests of the revolution of 1949, has meant that going to a doctor or a hospital is a privilege reserved for those who can pay. Some Chinese newspapers have made public the fact that only 25% of the urban population and 10% of the rural population have access to medical insurance, which places China in the fourth worst position in the world in terms of equality of access to health. The only countries below China are Brazil, Burma and Sierra Leone.

With respect to education, where the privatization of the education system has advanced rapidly, we can only cite that in 2004 the Chinese government launched a campaign for the expansion of obligatory education for those up to 9 years of age and for the elimination of illiteracy amongst youth.

More general aspects, although no less important, which affect the quality of life of millions of working families, such as air and water quality, have also suffered from accelerated deterioration. The contamination of rivers and lakes is so severe, especially in the north of the country, that at least 60 million people have difficulty gaining access to sufficient quantities of potable water. China has the sad honour of having 16 of the 20 most contaminated cities in the world.

The conditions of the working class in China are similar to that of the workers in England described by Engels in the 19th century. 80% of all mining deaths in the world happen in China. In 1991 80,000 workers died in work accidents. In 2003 the figure surpassed 440,000. Between those aged 20-35, the leading cause of the death is suicide. Each year there are 250,000 suicides and 2.5-3.5 million suicide attempts.

In short, China is not a happy and stable society looking towards a comfortable society, but the playground for a savage capitalism which extracts surplus value from the masses exactly as it did when the country was in the hands of the powerful colonial powers.

Who opened the doors of the Great Wall to Big Capital?

This is the tragic balance of the restoration of the private ownership of the means of production. Certainly, the reforms have permitted a spectacular growth of GDP of about 9% for the last two decades. European and American capitalists have made great fortunes from massively investing in China. However, who opened the doors of the Great Wall to big capital? Who converted China into a paradise of capitalist profits and a hell of super-exploitation for the proletariat? The answer is simple: those who have had power for years.

This long process of capitalist reforms was guided by the firm hand of the main leaders of the Chinese Communist Party and the Stalinist bureaucracy, which did not limit themselves to being the mere stewards of capitalism, but which finally assumed the role of protagonist of the counter-revolution, transforming themselves into an important part of the new class of owners. It is not wonder that they are so interested in guaranteeing their new individual properties and rights by law.

The history of China has entered into a new, convulsive stage. Faced with the gang of exploiters, the Stalinist bureaucracy and the imperialists, the majority of the Chinese people find themselves on the side of the exploited, who at the beginning of the 21st century live and work in conditions more akin to the dawn of the 19th century.

The Chinese peasantry and proletariat have exceptional revolutionary traditions. With the blood of the millions they have written many of the most glorious pages in the history of the struggle of the oppressed. In the 1949 the weak, backwards and dependent Chinese capitalism could not resist the tide of the revolution. It is certain that this monstrous capitalism, the child of the decadence of imperialism and capitalism and the counter-revolutionary work of the Stalinist bureaucracy, will be sooner or later swept away in a new wave of the Chinese Revolution.