Details
In Defence of Marxism
17 August 2007

Mexico
Share
Tweet
The pressure against the detention and incarceration of the comrades from the CLEP-CEDEP, Militante and the Movement of Non-Accepted Students (MENA) has begun to bear fruit. However, the release of the comrades does not mean a full victory yet.

Cesar Francisco Jay Aguilar has still not been freed 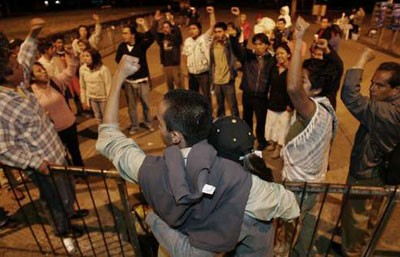 The pressure against the detention and incarceration of the comrades from the CLEP-CEDEP, Militante and the Movement of Non-Accepted Students (MENA) has begun to bear fruit. This included statements from various unions, marches such as the one on August 8 from Ángel to the los Pinos presidential palace, rallies at the North Detention Centre, assemblies at UNAM (National Autonomous University) and IPN (National Polytechnic Institute), marches called for tomorrow in main UNAM campus CU as well as in Zacatenco campus of the IPN and the threat of student strikes.

Since August 14 and 15, electronic media and newspapers have carried articles explaining that Villa Rivera, the director general of the IPN, would withdraw some of the charges and this morning, August 16, at 2:30 am, 7 comrades in prison in the North Detention Centre in Mexico City were freed, including comrade Nahúm Pérez Monroy, against whom there was a slander campaign, even saying that he had been expelled from UNAM. This shows the hatred the state and in particular the authorities of the IPN and UNAM have for him. The latter were very active in bringing "proof" to the courts so that the comrade would remain in custody for a longer period of time.

The authorities believed that with their attack they could destroy the most militant and well-organised student organisation in the country. However, we responded with appeals to the labour movement and the University and Polytechnic community to respond to this aggression with mobilisations. This came as a shock to the authorities and forced them to retreat. 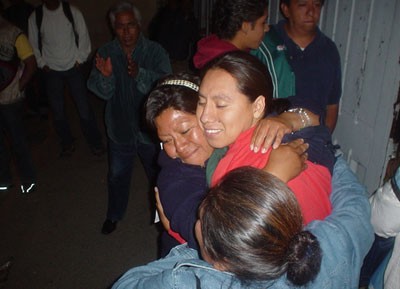 This does not mean a full victory yet. The comrades have been released on bail charged with illegal deprivation of freedom (privación illegal de la libertad), but as we have already explained their only crime was to defend the right of the children of the working class and the peasantry to an education. We have had to pay an obscene amount of money in bail to free our comrades - 57 thousand pesos (approx US$ 5,100) for the 7 comrades, while the comrades still face trial for crimes they have not committed. These comrades are not delinquents, but young proletarian fighters.

We are also aware of the fact that there are arrest warrants for a further 12 or so comrades in the CLEP-CEDEP and the Marxist Tendency Militante. They want to bind our hands so that the ruling class can move ahead with their attacks on public education and snuff out the resistance of the working class against the ISSSTE social security law, where the CLEP-CEDEP has played an important role in mobilising strikes, acting as an example for the workers and acting more consistently than many trade union leaders. Thus we call upon the workers' movement and the youth, in Mexico and internationally, to oppose the attacks on the revolutionary youth, because the current government wants to stop the most consistent organisations in order to crush us, and because with our actions we demonstrate that the road to follow is the path of revolutionary politics.

If the labour movement responded in the same way as the CLEP-CEDEP has today, the workers of the ASSA would not be suffering under the current attacks, the ISSSTE law would have already been defeated and would be adopting an offensive, not defensive posture. The current attacks against the Marxists cannot be defeated without the support of the whole of the workers and youth movement.

We call upon the workers, peasants, and students organisations to support us. We need financial assistance in order to pay the humiliating fees that the ruling class has imposed upon us and we require a united struggle of the whole of the movement in order to organise a general strike in order to stop the attacks and defeat the bourgeois government to build a socialist society, where there will be no youth without education.

We have taken an important step forward. Throughout this entire process we have not forgotten about comrade Adán Mejía, imprisoned in the Ixcotel detention centre in Oaxaca. This first victory inspires us to struggle to free him and Francisco Jay as soon as possible, a young comrade, a minor, who is still being held in the Consejo Tutelar de Menores.

Long live the struggle of the youth and the workers!

Freedom for all political prisoners in Mexico!

Withdraw all charges and warrants against the CLEP-CEDEP and Militante comrades!