The political apathy that prevails amongst the deprived and oppressed masses in Pakistan reflects the deep malaise and despair that has set in society. The mammoth reception that Benazir Bhutto was accorded five years ago on her return from exile to Karachi on 18th October 2007 that had raised new hope for the masses and the subsequent campaign that has turned into a vigorous movement had sent tremors in the echelons of power. 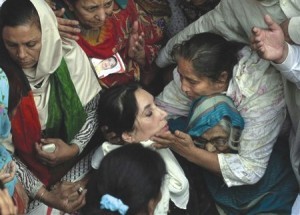 Benzir Bhuto assasinated in 2007 - Picture: Sang Pemburu Berita blogIn desperation the reactionary sections decided to eliminate the point of reference of the upsurge. Benazir Bhutto was struck down with bestial vengeance and the imperialist brokers and the reformists in the state stood clueless and impotently on the sidelines. They were no less petrified by this upheaval the tremors of which were beginning to threaten the system and state. However, the bosses in Washington and London had a plan B in case of such a scenario. CIA’s wily operative Zalmay Khalilzad orchestrated this transition to demoralise and plunge the movement into an abyss of sorrow and despair. Results of the 2008 elections were tailored in Washington in accordance to the imperialist strategy of ‘reconciliation’. A coalition government was installed to carry out the most ferocious economic and social attacks on the already impoverished teeming millions in Pakistan.

Five years on the toiling masses have not completely recovered from this tragic defeat inflicted upon them through a democratic counter revolution. Unprecedented price hikes, unemployment, poverty, drudgery, violence, shortages, terrorist violence and state repression have ravaged society and devastated the masses. There is no real alternative on the political horizon at present for the respite of the masses from their woes. Imran Khan the much prompted messiah has been utterly exposed by the recent events. The thin veneer of glamour, justice, veracity and liberalism has come off revealing the real conservative and right wing chauvinism with overtones of fundamentalist bigotry. The other right wing parties including the Muslim leagues don’t really engender any real hope. The extreme right wing and the Islamic parties despite support from important sections of the state and the media have seen their political base wither into a downward spiral. The terrorism being obtruded by the religious outfits have created a hatred and revulsion amongst the masses towards these merchants of black economy and religious reaction. The terror of the neo fascist MQM mafia bosses who have to increasingly rely on state power to protect and preserve their criminal extortions and omnipotent fear in urban Sindh. The regional nationalists although being propped up by adversaries of the proxy wars have forsaken any progressive or social economic content in their programme that would galvanise the toiling classes of the oppressed nationalities.

The exploited masses have always voted for the PPP as a vehicle of change. But with the experience of the incumbent regime that flame of hope has flickered. In absence of a mass revolutionary alternative it continues to stagger on. The recent appointment of Manzoor Wattoo at the helm of the PPP in Punjab shows the direction into which the leadership is heading. This scheming bourgeois politician has been in connivance with every rotten military or the civilian right wing regime. He is a sly operative and is known for his expertise in the backroom deals, political treachery, intrigue, conspiracy and shadowy manoeuvrings. This has hardly anything to do with the ‘politics of the people’. The leadership has since decades tried to make the party more subservient, insipid and palatable to the establishment and imperialism. The imperialist and state honchos have never really trusted the party. Not that they doubted the authenticity of the appeasement of the leadership but they were always terrified of the root cause of PPP’s mass support.But this time the PPP leadership came into power not in an ascent but after a vicious defeat of the movement after the tragic events of December 2007. They had no real pressures from below and hence instead of reforms it carried out counter reforms and severe austerity cuts under the dictates of the IMF. The malicious policies of trickledown economics have pulverised the masses. Those who have tried to give a left cover to these draconic policies are the worst perpetrators of these crimes against the people.

As Marx once wrote that the burden of the tradition is like the weight of the Alps on the shoulders and consciousness of the working classes. The working classes in Pakistan have been dismayed and severely disillusioned by the PPP leadership but sardonically they don’t have an alternative choice, as yet. This can’t be artificially created in a period of stagnation and mild reaction. But the irony is that with a decrease in support that might express in the shape of mass abstentions in the next elections and without a movement in the offing, the PPP will not be of much use for the imperialist bosses and the establishment. The dialectical paradox is that now when a mass upheaval egresses it will initially orientate towards the PPP. But it will be a double edged sword that will not only move forward to sever the shackles of capitalism but it will cleave the PPP on class lines. The stranglehold of the leadership on the so-called party structures is due to the perks, privileges and monetary gains by being in government. Once the present PPP leadership loses state power there would be fierce disarray and pandemonium in the party.It has not been much of a party with organised structures, internal democratic regime, electoral colleges and national conferences or party congresses. The last national party conference was held in 1972. There have been leftwing and right wing splits in the past but they were not of much significance, as the attacks from the state and the right wing gave new life to the hierarchical leadership. But this time round with the mass support of the party dwindling the splits and dissentions would be decisive and probably on class basis. Zardari inherited his wife’s party but not her authority or charisma. In such mayhem if the left is not organised, accidental and demagogic figures might emerge in the vacuum after the demise of the discredited and corrupt leadership. With a Marxist leadership and a Leninist organisational structure a revolutionary force can emerge that will carry out the socialist founding programme of the party and complete the unfinished revolution of 1968-68 that gave the PPP its mass base and traditional status for the working classes in Pakistan.