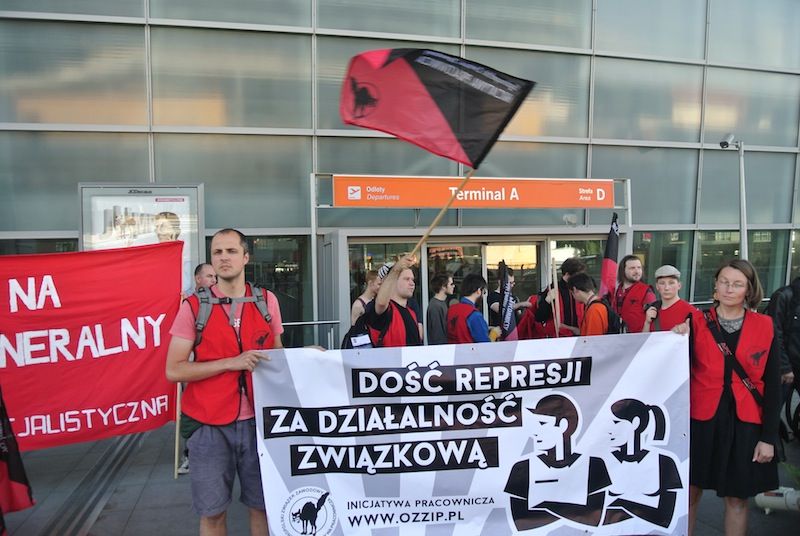 In today's episode from the "One rule for the rich, another rule for the workers" series, a well-known journalist, trade union activist and socialist, Piotr Nowak, was faced with a choice of either spending 20 days in prison or paying a 1000 Zloty fine. The “crime” stated was the organisation of a small protest outside of the Fryderyk Chopin airport in Warsaw back in 2014.

The demonstration of Inicjatywa Pracownicza (Labour Initiative) was calling for the protection of trade union rights of AELIA workers who were being repressed for their union activity. It's worth noting that this incident took place under the then “neo-liberal” government of the Civic Platform (PO) party which are currently "championing" the struggle for the values of freedom of speech and assembly against the current regime of the PiS party. Let us remember this whenever they next shed their crocodile tears for all that is good in this world, conveniently in the run up to the next general election in 2019. In reality, the two parties are in the most loyal solidarity with each other when it comes to the continuity of repression of the labour movement.

The details of how this incident came back to haunt the socialist activist are still unclear. The trend, however, isn't far from anything we have seen so far.

Piotr Ikonowicz, leader of the tenants' rights movement, famous for heroic blocking of unfair evictions, has been arrested on trivial charges. In the midst of relative weakness of the Polish left, the ex-Democratic Left Alliance (SLD) MP is well known for organising local protests in cities such as Warsaw and Łódź and has been a key figure in demonstrations against wars, fascism and the ills of the capitalist system. He is one of the few lone voices which are occasionally given the opportunity to defend the left in the media, which highlights his significance as a key figure in the Polish labour movement.

Last year, Ikonowicz was arrested after an episode in which Bogdan Chazan, the local hospital's manager, refused an abortion for a woman whose foetus had serious defects. Ikonowicz accused Chazan of having no conscience, which he reported to the police as a personal offensive statement. Comrade Ikonowicz was consequently arrested for not showing up to the trial – as he was busy defending ordinary working people from the axe of eviction on the same day. 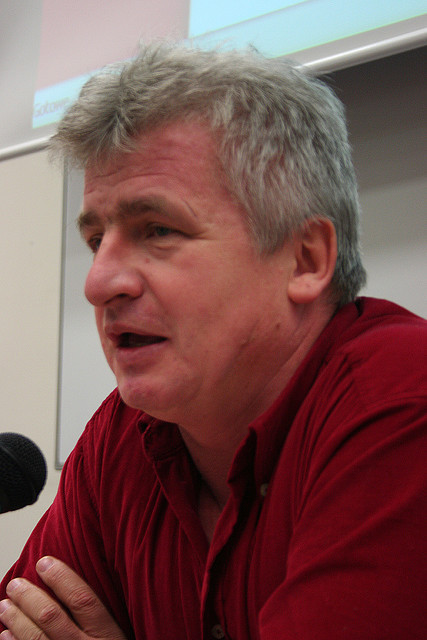 Piotr Ikonowicz. Photo: Instytut Spraw ObywatelskichThe state, of course, has no problem with leading figures of the political class spouting vile reactionary statements, rarely ever seen as "personally offensive", but instead draped in the national flag and painted as patriotic. It's far from being a mystery as to why this patriotism is limited to the ruling class and its agents and does not include working class people and especially “undesirable” minorities.

The hacks and pundits are tripping over themselves to guarantee freedom of speech to zealots such as MEP Janusz Korwin Mikke who openly called for public executions of socialists (https://www.youtube.com/watch?v=xV_7yk_1qsY ). MPs such as Krystyna Pawłowicz are facing no consequences in spite of years of regularly attacking the LGBTQ community, or the disgraced ex-leader of Solidarnosc, Lech Walesa, calling for the striking workers to be beaten up with batons.

Weak bourgeois elements such as Chazan must be protected at all costs from being exposed as the ignorant reapers of misery that they are, when bourgeois speeches directly inciting violence against working class communities are considered absolutely normal. The Polish bourgeois class of today is drowning in the poverty of its own philosophy and cannot justify its own existence in a revolutionary manner as it was able to do in the distant past. In an attempt to cover up its own cacophony of nonsense, socialist and revolutionary speech is attacked and restricted, whereas backward bigoted bile is encouraged and promoted.

Mateusz Piskorski, the leader of the newly created left-nationalist Zmiana (Change) Party has been accused of spying for the Russian state by the Polish secret services (ABW). No evidence has been produced to support such a claim. Naturally, there was nothing out of the ordinary for the Polish Third Republic to grant numerous medals and awards to Ryszard Kuklinski, a military general praised for his espionage for the US bourgeois state during the Cold War.

In case anyone is struggling to notice the empty shell that patriotism has become – in essence, the love capitalist class has for itself and nobody else – here we have a perfect example. Working class heroes, leading selfless struggles in the trade unions and on the streets in defence of the real basic rights of the working class of Poland are not deemed at all as patriotic – after all, their actions threaten the comfortable position of the Polish ruling class.

The Communist Party of Poland has itself been a target of the ruling class for years. The PiS politicians, ever eager to illegalise it, have finally got the opportunity and are going ahead with it. Formed out of the minority of the PRL period Polish United Workers' Party, the party refused to go with most of their bureaucratic colleagues and did not participate in the restoration of capitalism, forming the Union of Polish Communists "Proletariat" in 1990 and ultimately the Communist Party in 2002. Its newspaper, Brzask (The Dawn) has been the basis of these accusations, as it has the Hammer and Sickle on its masthead. Bartosz Kownacki, the MP of the PiS who described the Warsaw rainbow monument as "The Rainbow of Faggots", has ensured that the main activists of the KPP face a "neutral" trial without any possibility of a defence counsel in court. The sentence they're facing is up to two years in prison. Of course, the current “neo-liberal” opposition constitution bashers did absolutely nothing at all to oppose any of these hypocritical attacks on freedom of speech and assembly.

One after the other, the ruling class is working hard to guarantee that the future shift in the political pendulum to the left is contained at its roots. There is a clear pattern of continuity in this behaviour whichever party is in government. For however calm the period might seem, it is in the very nature of capitalism to prepare a slump. It is a system riddled with contradictions which cannot continue to develop society within its own framework – we are almost in a state of permanent crisis.

The comical management of this system by the nationalist PiS is the equivalent of attempting to tie the blue and red cables of a ticking bomb together in a tight knot. Eventually, the so-called “solutions” they are desperately trying to impose on this chaotic capitalist system will inevitably explode right under their noses.

It must be remembered, that the shortcomings, weaknesses and open betrayals of the past Polish and international reformist and Stalinist leaderships paved the way for today’s authoritarian attacks which would be met with fierce opposition if they had not turned their backs on the working class and remained firmly based on working class politics. The Polish workers, with their rich tradition of struggle, could dramatically shift towards the left when the PiS inevitably loses its credibility - just like the PO did. The actions of key leaders in the trade union and socialist movements, currently attacked by the state, would be crucial in such developments.

To anyone currently following the Polish situation, they know it is difficult to accuse the PiS politicians of any nuanced, long-term vision and self-awareness. The hatred and repression of the left has its roots deep within the capitalist system itself - where two classes with mutually exclusive interests fight for the wealth of the society – where one fights to reclaim what it produces, another fights for the right to suck all life out of it.

However, the present mood will not last for ever. The failures of the old Stalinist regime prepared this situation. But just as that bureaucratic regime failed, so will today’s capitalist regime. Capitalism is in a deep crisis globally, and this is already having an impact on Poland. Once the inability of capitalism to solve the most basic problems of the working class becomes evident, a new period will open up, one of intense class struggle, which will in turn produce a massive political shift in which the Polish workers will rediscover their past.

The most urgent task of Polish socialists is to study history, the victories and defeats of the Polish working class, develop their sense of foresight with Marxist theory, and thus pave the way for future successes and provide the Polish workers with that confident working class leadership they deserve. The historical task is to rebuild and continue the legacy of struggle for freedom, learning from the lessons of the heroic struggles of the past, of 1905, the 1920s, 1956 and 1970, to name a few examples.

Today’s repressive measures against Piotr Nowak are an attack on all socialists, inside and outside Poland. Today’s “criminals” will become tomorrow’s heroes in the fight against Polish capitalism. The International Marxist Tendency expresses its solidarity and calls for all charges against Piotr Nowak to be dropped and calls on our supporters to protest at this barbaric situation, and raise awareness in the international labour movement about what is going on in Poland.